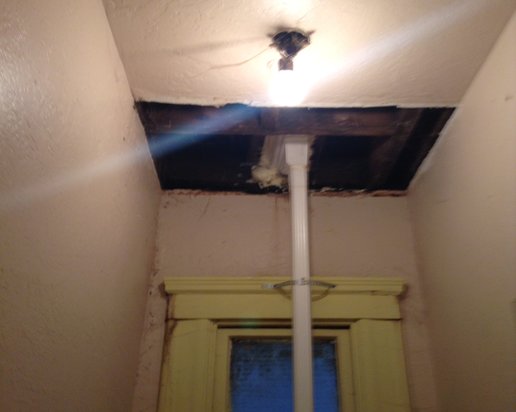 We hear a lot about Mission district landlords upgrading properties and raising rents, but the old fashioned style of landlord malfeasance continues. That’s why in April 25 Latino tenants had to be relocated from 938-940 Hampshire Street due to collapsing ceilings, stairs and raw sewage leaks. Now, their new speculator landlord, Working Dirt, LLC, is trying to reduce the relocation payments to tenants at the June 15 meeting of the Building Inspection Commission.

Last December and January, 938-940 Hampshire was cited for rear stairs that had collapsed, raw sewage leaks that had gutted two ceilings, and a host of additional horrors, according to Notices of Violations obtained from the SF Department of Building Inspection. The City proceeded to take administrative action and collected three Orders of Abatement, with a lien placed on the title of the property.

In mid-January, the property was purchased by Working Dirt, LLC. When the hallway ceiling caved in on April 2, DBI housing inspectors ordered the property vacated to protect the safety of the 25 tenants. “At first, they tried to give us only a small payment,” said one tenant at the time. “It would not have covered everybody, not even close.”

The landlord issued a check, and the tenants vacated. Then, the landlord stopped payment on the relocation check. DBI issued a determination of relocation benefits based on the NOVs.

After the tenants, through their counsel and representatives, were finally able to get the required amount, they moved into various SRO residential hotels. Causa Justa/ Just Cause has reported that some of the tenants were told to move rooms within the hotel to prevent their gaining tenancy, a practice known as “musical rooms.”

Rather than promptly make the repairs, the landlord chose to spend time and resources appealing the Orders of Abatement, as well as the determination of relocation benefits. The landlord is represented by attorney Andrew Zacks.

The landlord’s actions have prevented a prompt resolution of this case, with the 25 Latino tenants still unable to return to their homes. City Attorney Dennis Herrera’s office is presumably looking into this latest abuse of tenants’ rights.