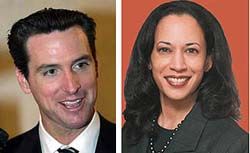 As San Francisco confronts yet another police scandal, Mayor Newsom has created a “Blue Ribbon Commission” to review the standards of conduct and training at the SFPD. But such oversight bodies typically have their recommendations ignored. A more effective approach for investigating systemic and potentially criminal violations by public entities.is to appoint a Special Prosecutor and convene a grand jury. Since District Attorney Kamala Harris is too dependent on the SFPD to investigate its abuses, only an outside prosecutor will get to the bottom of the SFPD’s longstanding problems.

It was certainly no surprise to learn that many police officers at Bayview Station have contempt for those they are paid to protect and serve. Police-community relations in Bayview have been troubled for years, as predominately white officers act as if they are an occupying force in a largely African-American community.

If it took a racist video to bring meaningful change to the SFPD’s Bayview presence, fine. The focus now should be to ensure that this scandal, unlike its predecessors across San Francisco, is not dealt with by simply rearranging personnel.

Mayor Newsom appears committed to solving this problem, and his quick response of creating an outside investigative body was sound. But an oversight body that lacks prosecutorial powers will accomplish little, and is unlikely to be taken seriously by a distrustful community.

The only way real reform will come to the SFPD is if a special prosecutor independent of the political process is given full powers to get the job done. As Mayor George Moscone learned nearly thirty years ago, and as has been proved by his successors, San Francisco’s political system prevents meaningful SFPD reform.

Mayor Newsom sees himself as a path breaker, and his approval numbers are high, but no prior mayor in recent history has succeeded in changing the dominant culture of the SFPD. Willie Brown had a brief period where he seemed to have the SFPD intimidated by his power, but once his focus moved elsewhere, the bad practices returned.

A Mayor who chooses to battle the SFPD is soon tagged as “soft” on crime. To register their displeasure at Moscone’s appointment of reform chief Charles Gain (who did not wear a uniform and had patrol cars painted a more friendly blue rather than the traditional black and white), the police are reported to have simply stopped making arrests.

Either of these responses would drive Mayor Newsom’s approval numbers down in a hurry.

Whereas Mayor’s must focus on many issues, the SFPD has the advantage of being able to devote all of its energies to its institutional survival. No mayor wants to devote the bulk of their time to battling against those who arrest dangerous criminals.

District Attorney Kamala Harris is even less able to address police corruption (or any corruption, for that matter). The District Attorney’s office relies on police as witnesses, and exposing the SFPD as a bunch of liars and racists would not be good for a DA’s conviction rates.

While an independent special prosecutor may seem like overkill in the absence of clear criminal wrongdoing, San Francisco cannot know the full extent of problems at the SFPD absent such an investigation. After all, federal prosecutor Patrick Fitzpatrick spent nearly two years gathering information in the Valerie Plame CIA-outing case before issuing a single indictment.

Watergate, ABSCAM, Iran-Contra, and what has become known as Plamegate all saw independent special prosecutors ferret out official corruption that would otherwise have remained secret. Even if a special prosecutor investigating the SFPD found no evidence of criminal acts, the Bayview community and all San Franciscans would at least know that a trustworthy investigation had occurred.

This will not be true for a report issued by a Blue Ribbon Commission. Neither the Police Commission nor OCC can provide the type of review the Mayor seeks, but only a special prosecutor will full investigative powers can produce lasting change in the Department.

After the 49ers racist and homophobic video, one would think that this is one type of mistake that would not be repeated. But the SFPD has operated by its own rules for so long that it most of its officers see nothing wrong with getting a few laughs at the expense of African-Americans trying to avoid displacement in that violence-wracked community.