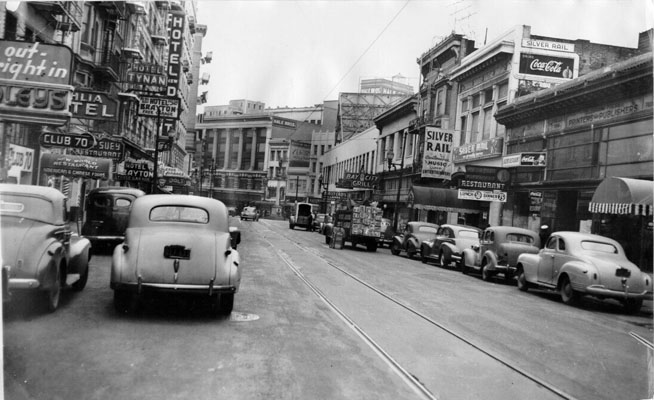 Lower Turk in 1944. The Silver Rail, then an underground gay bar, is on the right.

Fifty years ago, in August 1966, drag queens, trans sex workers, hair fairies and gay street hustlers rose up against police harassment in what became known at the Compton’s Cafeteria Riot. This occurred at Turk and Taylor Streets in San Francisco’s Tenderloin neighborhood, which was then still the geographic center of the city’s GLBT movement.  By the end of the decade this center moved west, and in 1976 an increasingly politicized movement formed what is now the Harvey Milk LGBT Democratic Club. The Club celebrated its 40th anniversary last week.

Commemorating these historic anniversaries reminds us of some core truths about the struggle for social change. The Compton’s riots and the forming of a progressive LGBT Democratic Club in 1976 followed years of struggle. The Compton’s riots were preceded by over two decades of attacks on the Tenderloin’s gay bars that began during World War II and intensified through the 1950’s and 1960’s.

During these years City Hall used every means to stop what SF Examiner publisher William Randolph Hearst described as the “influx of homosexuals” coming into the city. The Tenderloin was targeted by opponents of this influx because many gays found safe haven in Tenderloin bars. Closing these bars was part of the Hearst/City Hall strategy to stop San Francisco from becoming “a haven for undesirables.”

Had the drag queens and other early gay rights pioneers left town in the face of this official hostility, the social and political empowerment of the LGBT movement through the Milk Club, the earlier Tavern Guild, and other organizations might not have occurred. Fortunately,  these early pioneers stayed and insisted on their rights.  As marriage equality is the law of the land, it’s easy to forget that as late as the 1960’s being gay in a San Francisco bar subjected you to arrest.

I recount the story of the Tenderloin’s launching of the city’s GLBT movement in my book, The Tenderloin: Sex, Crime and Resistance in the Heart of San Francisco. It is a story that saw the city’s  powerful political forces repeatedly declare war on the Tenderloin’s gay culture,  only to lose time and time again.

This history of emerging gay power is also on display at the Tenderloin Museum, and the broader history of the city’s GLBT movement is available at the GLBT Historical Society .

To help honor Compton’s 50th anniversary, there will be a special showing at the Roxie Theater on August 18 at 7:00 pm of the award-winning film, Screaming Queens    (tickets can be purchased here). Directors Susan Stryker and Victor Silverman will be present to answer questions about the film, enabling attendees to get an up close and personal perspective on the rise of San Francisco’s GLBT movement and the historic significance of the Compton’s riot.

When last year we showed Robert Zagone’s 1966 film Drugs in the Tenderloin at the Tenderloin Museum and then at the Roxie, I asked audiences how many had seen Screaming Queens. Most people had not. This confirmed my view that many do not know how San Francisco’s GLBT movement emerged, and the hard path many took to build it.

The many scenes in Drugs in the Tenderloin when two lesbians are interviewed about why they have risked jobs and their very lives to be outwardly gay were shot inside Compton’s (0ne of the women had a hard time getting a job because she had been discharged from the military in the early 1960’s for being a lesbian).  Compton’s was a coffee shop that also served as a vital social meeting place for lesbians and drag queens. One reason they hung out at Compton’s was that they faced arrest for wearing “male” clothing on the street. The “hair fairies” emerged because while the police could arrest queens for wearing opposite gender clothing, hair styles were protected.

Compton’s outsized social role raised the stakes for queens and lesbians accustomed to spending time there. This is the backdrop for the riot recreated in Screaming Queens.

Lower Turk’s queer legacy includes Compton’s, the nearby El Rosa Hotel at 166 Turk (renamed the Helen), the Silver Rail (974 Market with an entrance on 65 Turk), and the Old Crow also bordering Turk (962 Market). There was even a Queen’s Restaurant at 89 Turk. The legendary Aunt Charlies at 133 Turk did not open until 1987, but its part of the historical fabric. A development project planned for 950 Market would demolish the Market Street sites. This has led activist and historian Shayne Watson to push the city’s Planning Department to recognize the site’s historic LGBT ties.

Watson recently told the Bay Area Reporter that the Silver Rail and Old Crow were “relatively safe spaces where people could meet each other and form communities. LGBTQ community formation couldn’t have happened without these early bars.” She feels that a Tenderloin LGBT historic district “adds a layer of protection to LGBTQ-associated properties in the Tenderloin.”

As I describe in my book, the Silver Rail was a particular target of City Hall attacks on Tenderloin gay bars. Although the California Supreme Court ruled in 1952 in a case involving the Black Cat on Montgomery Street that police could not arrest people in bars for being gay, the police in 1953 raided the Silver Rail three times in order to find grounds to arrest patrons. The grounds they found—serving beer to a minor, a patron was drunk, and another lacked a draft card—led the media to conclude that a “wholesale cleanup of (gay) taverns was underway.”

The Silver Rail reportedly had its Market Street entrance for straight customers while gays entered through 65 Turk. This was among the strategies bar owners serving gay customers had to use to avoid having their places shut down (and many still were).

It’s a wonderful, colorful and important history. And if turning lower Turk into an LGBT historic district helps remind people of this past, I can’t imagine any opposition. The Helen’s owner has previously approved my request that we return the building to its original El Rosa name, and that would add to the new LGBT historic district’s identity.

50 and 40 year historic anniversaries don’t come that often. So go see Screaming Queens (or see the DVD) and think about all the unknown gay people who risked arrest and public attacks to launch the GLBT movement that Harvey Milk and others took to 2016.

Randy Shaw is Editor of Beyond Chron. He details the Tenderloin’s GBLT history in The Tenderloin: Sex, Crime and Resistance in the Heart of San Francisco