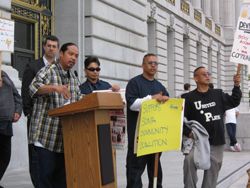 A group of South of Market community members and activists, calling themselves the SoMa Community Coalition (SCC), announced their demands for changes in the Rincon Hill redevelopment plan yesterday. Delivered during a spirited rally from the steps of City Hall, the demands included a variety of ways to ensure those currently living in Rincon Hill do not get displaced by new development there and that they receive some of the benefits new development will bring. SSC called for the plan to provide more affordable housing cheap enough for current residents to afford, long-term employment opportunities for the neighborhood, and a community stabilization fund to help those impacted by impending changes in the area.


The Rincon Hill redevelopment plan, perhaps best know for the proposed 45-story residential towers to be built in the area, grants developers massive density and height allowances in the hopes of promoting a resurgence of development there. Yet despite these giveaways, the plan currently provides little to the community in return.

“When a community decides to allow a huge concession to developers,” said Supervisor Chris Daly, speaking at the rally, “it is only right and just to demand things that benefit the community that allows that.”

In addition to concerns that the plan doesn’t give back enough, many at the rally also argued that new development in Rincon Hill will cause massive gentrification and displacement of long-time residents there. Most of the changes demanded by the SSC for the plan center around preventing this from occurring, a cause many SoMa activists seem committed to for the long haul.

“Let’s not be tricked and fooled by the people who are trying to kick us out,” said Rudy Corpuz, a member of United Playaz. “There’s a lot of rich people trying to pull our people out.but this is a community. It’s my community, and it’s my home. I’ve shed blood and tears here. It’s ours, and we’re gonna fight to the end for it.”

That fight will move to the Planning Commission tomorrow night, where the Rincon Hill plan will be reviewed for approval. Should it gain approval there, it will soon come before the Board of Supervisors, where it will likely face a tough battle to pass as currently written. Daly recently vowed to fight tooth and nail to assure that at the very least, the plan includes funding for stabilizing the community as developers move in and drastically alter it.

In addition to this funding, SSC’s specific demands including that new housing be truly affordable to those currently living in the area, with an additional demand that some housing be built for families. SSC also asked the city to ensure that the probable increase of traffic in the area be addressed, especially in terms of pedestrian safety. And they requested investment in many basic public infrastructure needs in SoMa, including adequate schools, parks and libraries.

The SSC also requested the plan ensure people in the SoMa community receive jobs as a result of the development, a request made all the more pertinent due to the massive line of job seekers stretching around the block just across the street from City Hall. The Bill Graham Civic Auditorium Center held a job recruitment event for Muni during SSC’s rally, and hundreds lined up for the chance at just a few jobs starting at $38,000, many likely coming from the nearby low-income SoMa district.

The juxtaposition of these two events, just a block away from each other, demonstrated the vital need for SSC’s requests to be fulfilled. As poor and working-class San Franciscans increasingly feel the pressure of high rents, gentrification and a lack of blue-collar employment, the city must find ways to ensure these people’s needs are addressed.

If they can’t be met in exchange for giving big, corporate developers subsidies and zoning give-aways in places like Rincon Hill, when can they?