Sorry, GOP, Martin Luther King Jr. was not one of you. He even trashed your beloved Reagan. 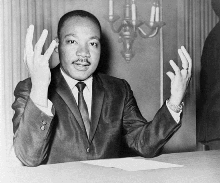 Republicans today have all kinds of uses for Martin Luther King Jr., but their version of him probably isn’t one he’d recognize. Not only are Republicans an active part of the campaign to turn King into a bland saint whose political commitments went no further than integrated buses and people not being lynched for trying to vote, some of them actually claim—falsely—that he was himself a Republican. But bland King was not, as his description of Ronald Reagan’s first presidential run makes clear:

When a Hollywood performer, lacking distinction even as an actor can become a leading war hawk candidate for the Presidency, only the irrationalities induced by a war psychosis can explain such a melancholy turn of events.

Not only is that not bland, it doesn’t sound like something you’d hear from a Republican, either. He didn’t sound like much of a fan after the 1964 Republican National Convention, either:

The Republican Party geared its appeal and program to racism, reaction, and extremism. All people of goodwill viewed with alarm and concern the frenzied wedding at the Cow Palace of the KKK with the radical right.

Not that King was a Democrat, mind you. His politics weren’t party politics and he would pressure and criticize Democrats if they stood in the way. But you have to stop paying attention to what he said and did pretty much immediately after he delivered his “I have a dream” speech (and not pay very close attention to a lot of things before that) to find a King agenda that today’s Republicans are on board with. The man was killed while supporting striking sanitation workers, for heaven’s sake, not to mention his strong opposition to the Vietnam War. Also, that characterization of Reagan is probably grounds for excommunication from the GOP even for people who want to be Republicans.