Some Cloned Beef with those GMO Vegetables? 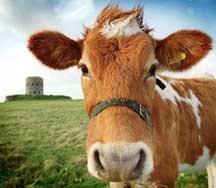 For those who thought that genetically modified corn and soy was the worst thing to hit the American diet since corn syrup, comes news that the FDA last month approved the selling of the meat and milk of the offspring of cloned animals.

This despite the shortcomings that are still evident in the cloning process, which sometimes produces sickly and deformed copies of the original animal. No doubt aware of this fact, the federal agency asked for a “voluntary ban” on selling the meat or milk of cloned animals until it could come up with a plan for incorporating them into the American food chain. The offspring, though, are perfectly safe, according to government scientists.

The Center for Food Safety is dubious. It says the FDA doesn’t have all the facts yet, because the federal agency made its conclusions from studies that weren’t large enough or were funded by the cloning industry. It and other consumer groups want products made from cloned animals labeled, so that shoppers can make informed choices at the supermarket.

To that end, there’s already bills in Congress and even in the California legislature to provide labeling on products made from cloned animals. Some groups and merchants want more.

“The lack of effective governmental oversight and tracking could mean consumers will lose the ability to choose clone-free products,” Margaret Wittenberg of Whole Foods told the SF Chronicle.

It’s too late. Consumers have already lost the ability to choose. People have eaten cloned meat and never knew it. Meat producers have admitted that they sold meat and dairy from cloned animals before the FDA released its decision. It’s doubtful that a “voluntary ban” will keep any more cloned animal products off the shelves.

Even with the most stringent labeling laws possible, there’s really no way to ever be certain that the steak you’re chomping on wasn’t cut from someone like “Ditto,” UC Davis’ cloned cow. The semen from prize bulls is routinely sold and produces countless calves all over the country. Who’s going to track all that sperm?

Even if cloning is eventually found to be perfectly safe, there’s still many other problems with meat production in America. It’s not just the steroids and antibiotics that are fed to the animals that end up in the blood streams of those who consume cows, pigs and other creatures. It’s also the quality of meat itself. Not to mention the cruelty inherent in raising animals to be slaughtered for food.

Just the other day the largest beef recall in the history of the U.S. (143 million pounds) was ordered by the U.S. Department of Agriculture because obviously sick animals were forced into a slaughterhouse, often by abusive methods. Federal authorities learned of the problem from a video shot by the Humane Society that allegedly shows non-ambulatory or crippled animals being shocked, kicked and shoved with forklifts.

To date, a few employees of Westland/Hallmark Meat Company have been arrested for animal abuse, but Westland itself has not been charged with anything.

According to officials, about 37 million pounds of the meat was consumed by students in school lunch rooms.

Sure makes me glad I’ve been a vegan for the past 28 years.