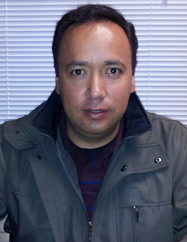 (Ed Note: This is the first of an ongoing series of profiles on the victims of speculative Ellis Act evictions)

On December 30, 2013 while many people were still on holiday break, Ricardo Samaniego and his family were served with an Ellis Act eviction notifice at their home. It was the fourth Ellis eviction notice they have received in their 22-year residential tenure.

The yellow Victorian building at 1353 Folsom where the Samaniegos live was built in 1912. The building next door was built in 1907, one year after the quake. The two Victorians now look out of place surrounded by blocks of drab industrial buildings. 1353 Folsom is sandwiched between an auto glass repair shop and The Powerhouse—a leather dive bar with a history that goes back to the heady days of 1970s gay liberation. On weekends loud dance music booms through the wooden walls.

The Samaniego’s third floor apartment overlooks a wide one-way thoroughfare where rush hour traffic speeds towards the freeway. The blocks are long and the neighborhood is decidedly car-oriented, with few businesses that would entice you to linger. Even the local Starbucks is located within a gas station encouraging you to get your coffee to go. It is one of the few areas in the city where auto repair shops and commercial storage still proliferate. The SOMA block has none of the neighborhood characteristics that Jane Jacobs would relish, but it is still the place that Ricardo calls home.

Ricardo’s job is also tied to the auto industry. He rescues distressed drivers and their broken cars as a tow truck operator. He attended high school in San Francisco and lives with five family members, including his 72-year old mother. Two floors downstairs is the Dulalas family, who have lived there since 1979. Teresa Dulalas’ parents have passed away and she and other family members remain in the childhood home.

The property received its first Ellis Act notification in 2001. Each Ellis Act over the next thirteen years followed the same pattern: a new owner would buy the building and shortly after “go out of business”. The purchase price appeared to be a bargain because of low expectations of rent from long-term tenants. After lengthy court battles, when the owners lost, they had no interest in being landlords so sold the building. The owners were different but the lawyers, Zacks & Freedman, P.C., remained the same.

Many San Franciscans have an Ellis Act story. It is hard to imagine the emotional toll on a family fighting an eviction with a landlord they barely know let alone four attempts.

At the Tenderloin Housing Clinic, a single lawyer Raquel Fox, held a large group meeting with Ricardo and other tenants. They represented three different buildings simultaneously being Ellised by the same owner, Sergio Iantorno. If Iantorno is successful, 41 individuals will be displaced by his act. One of his buildings has a tenant who has lived there since 1966. Iantorno also filed Ellis petitions for two more buildings in July of 2013. Possible evictees include René Yañez and family, progenitor of the Mission District’s popular Dia de Los Muertos celebration. (http://missionlocal.org/2013/10/royalty-of-the-mission-art-scene-faces-eviction/)

If Iantorno has no interest in being a landlord then you must question his decision to buy buildings full of tenants over and over again. The Ellis Act became law in 1986 and was rarely used in San Francisco until 1997 when it was discovered as a tool for speculative flipping. That the Ellis Act is being misused to creates such havoc for tenants and the city points to the need for the State Legislature to amend the law.