Solving The Urban Puzzle: Why Gentrification Happens (And Why It Doesn’t) 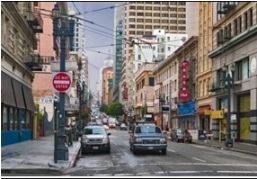 San Francisco’s enactment of a payroll tax exemption to attract jobs and business activity to Mid-Market and the Uptown Tenderloin exposed confusion about the meaning of the term, “gentrification.” Gentrification typically involves wealthier people displacing those previously living in low income and working class communities. This increases housing prices, attracts new businesses catering to more affluent consumers, and changes the physical, ethnic and socio-economic character of the neighborhood. But where distressed communities have tenant and land use protections that prevent displacement and upscale new development, and thousands of nonprofit affordable housing units and SRO’s but few home ownership opportunities for “the gentry”, the pre-conditions for gentrification do not exist. That’s why helping the Uptown Tenderloin bring jobs and improve public safety by attracting restaurants, bars and other businesses is a mission that all should support without fear of “gentrification.”

During the Board of Supervisor’s April 5 debate on the “Twitter” payroll tax measure, Supervisor Ross Mirkarimi argued that the Tenderloin neighborhood should be excluded from the legislation to avoid triggering gentrification. He even stated that the community should generally be left alone because it was enjoying “well neglect.”

Mirkarimi’s belief that the city should not try to improve the business environment in the Uptown Tenderloin so as to avoid “gentrification” raises some important questions:

Why do so few opponents of efforts to improve low-income communities actually live in these neighborhoods, if they are so desirable?

Why do they instead live in communities that have cafes, quality restaurants, grocery stores and other popular amenities that they oppose opening in low-income communities out of fear of “gentrification”?

Who are “the gentry”? Does the term embody single persons earning $55,700 (80% of SF median income), which in San Francisco is considered low or moderate income? Or are we only speaking of those earning enough to buy a house in the city’s already gentrified neighborhoods, which typically requires an annual salary of well over $100,000?

I suspect that some will see the opening of any new café, club, bar or restaurant in the Uptown Tenderloin in the next year as “proof” of the neighborhood’s “gentrification.” Forget that the neighborhood currently has thousands of people whose incomes can support such businesses, or that such businesses create local jobs and increase public safety after dark. Ignore the neighborhood’s thousands of nonprofit housing units and SRO’s, its extreme lack of home ownership opportunities, and city laws that prevent new high-rise development, mass evictions, or conversions or demolitions of SRO’s; because gentrification occurred in the Castro, Haight-Ashbury, SOMA, and many other neighborhoods, there are some who believe, contrary to local and nationwide patterns, that it must also happen here.

San Francisco’s Castro district began gentrifying in the 1970’s, prior to city rent control laws. The process continued through the 1980’s, and was fueled by the area’s high percentage of flats that could easily become ownership units either through eviction or attrition.

The neighborhood’s buildings experienced the physical and cosmetic upgrades (primarily to rundown Victorians) that also typified nearby Noe Valley. Despite strong gentrification trends in both neighborhoods, virtually no nonprofit affordable housing units were built or acquired as a strategy for maintaining economic diversity.

The Haight-Ashbury and South of Market (SOMA) were also gentrified by expanded home ownership and physical improvements, but also through government action.

The city’s Rehabilitation Assistance Program (RAP) in the 1960’s and 70’s used city code citations to effectively force Haight Ashbury owners to substantially upgrade their buildings and displace existing tenants (or sell to owners that would do so). The upgraded units were then rented or sold to more affluent residents.

RAP was quite effective in gentrifying the Upper Haight. Fortunately, RAP was not as widely used in the Tenderloin. I filed suit in the early 1980’s to stop the RAP program in the Tenderloin, and the city agreed to do so in lieu of a court injunction).

SOMA was transformed from the city’s “Skid Row” to an upscale enclave by the Redevelopment Agency’s 1964 vote to level thousands of low-cost SRO’s and apartments and replace them with convention centers, museums, and housing for the affluent.

The Castro, Noe Valley, Haight Ashbury, SOMA, parts of the Mission and every other gentrified neighborhood in the United States has one essential feature that can never exist in the Uptown Tenderloin: ample home ownership opportunities. The gentry want to be homeowners, not lifetime renters.

That’s why those seeking to gentrify the once dilapidated warehouse district of Williamsburg in New York City (which formerly housed working class Italian families and still includes low-income Puerto Rican and Hasidic Jewish families) could not simply wait for all of the longtime residents to leave; instead, they had to build thousands of high-rise condominiums to accomplish their goal. The same is true for New York City’s Lower East Side, in which high-rise condo development and conversions have spurred dramatic gentrification.

Similarly, the transformation of Harlem is almost entirely driven by the attraction of affluent homeowners to newly renovated and often formerly rental properties.

In contrast to low-income neighborhoods that were gentrified, the Uptown Tenderloin has remarkably few ownership housing units. It has a total of one condo tower, the beautiful and historic former Alexander Hamilton Hotel at 631 O’Farrell that was converted in 1964. The large Trinity-owned apartment building on O’Farrell across from the Great American Music Hall was built as condos in the 1980’s, but fell into foreclosure prior to opening and has always been rental.

In sharp contrast to Harlem, the Castro, Noe Valley, SOMA, and the Haight-Ashbury, virtually all of the Uptown Tenderloin’s buildings substantially exceed the six-unit maximum allowed for condo conversions. And because nonprofits like TNDC seized upon vacant lots that were put up for sale, there are no large opportunity sites for large condo developments in the future.

Further, no gentrified neighborhood includes, as the Uptown Tenderloin does, thousands of SRO units whose conversion or demolition is prohibited. Demolishing or converting SRO’s was part of the gentrification process in SOMA, Chicago, New York City, and other cities, but was prevented in San Francisco in the 1980’s. Single rooms lacking kitchens do not attract the urban gentry, and instead provide a refuge for low-income residents priced out of neighborhoods lacking such low cost housing (San Francisco’s Chinatown also has resisted gentrification due to its many SRO’s).

Contrary to what some believe, no neighborhood in the United States has been gentrified through the gradual, voluntary departures of working class tenants and the opening up of their units to more affluent residents capable of paying higher rents. Such a process is instead a product of a neighborhood already gentrifying, which occurs through creating significant homeownership opportunities in previously rental areas, undergoing the physical transformation of the pre-gentrified space through new development, demolition or substantial upgrading of existing units, and by the absence of tenant legal protections against displacement.

The Uptown Tenderloin offers an extraordinarily rare opportunity for the urban poor and working class to live in a highly desirable neighborhood without fear of gentrification. It is a community that won its hard-fought battle against gentrification, yet its residents still await many of the fruits of victory.

Randy Shaw is Editor of Beyond Chron and Director of the Tenderloin Housing Clinic. He writes about the Tenderloin’s battles against gentrification in The Activist’s Handbook.