“Soldiers of Conscience” and “The Rape of Europa” 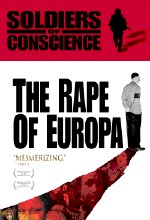 During this election season, the cost of the Iraq War has been measured by congressional allocations (subsumed into United States’ debt), candidate support or opposition to the war (and surge), and the number of coalition soldiers who have lost their lives. The long-term pricetag for the war in Iraq may land somewhere north of $2 trillion, and the political cost of the war, both at home and abroad, is now self-evident.

The human cost, however, defies easy exegesis. As the war has required little shared sacrifice, many Americans gauge the human cost through casualty tallies and deployment numbers. A more refined assessment may include additional factors—e.g., tens of thousands dead Iraqis; permanently maimed or wounded coalition soldiers; victims of the United States’ detainment, torture and rendition policies; the emasculation of the Iraqi people and their cultural heritage—but, from the outset of this war, our government has encouraged willful ignorance of the war’s “untidy” aspects. Thus, only Americans who served in Iraq or lost someone to war understand the true human cost. Or, as Sgt. Jamie Isom states in P.O.V.’s Soldiers of Conscience, which airs tomorrow on PBS, “people don’t understand what it’s like over there.”

Soldiers of Conscience tells the remarkable story of four soldiers who understand the cost of the war in Iraq better than most Americans ever will. Each of these men served their country in Iraq; some of these men killed for their country in Iraq. The four servicemen—Camilo Mejia, Kevin Benderman, Joshua Casteel and Aidan Delgado—were deployed as soldiers but returned from Iraq as conscientious objectors.

Serving in the military is an honorable profession, and Soldiers of Conscience explores the difficult area where honor, duty, morality and choice intersect and then collide. Conscientious objector (C.O.) status requires that a soldier have a “crystallization of conscience” that turns the soldier against all war, not merely the current war for which the soldier is deployed. This standard is inherently contradictory: a soldier’s personal view of war will be most shaped by his own war experiences, but C.O. status requires that a soldier extrapolate from that unique experience a moral objection to all war.

From the perspective of the military, therein lies no contradiction because all wars waged by the United States are just. Throughout Soldiers of Conscience, the military position is best articulated by Major Peter Kilner, a West Point professor of ethics and former 82nd Airborne Infantry Commander. Major Kilner believes that war is a necessary defense, and fighting and killing for one’s country is brutal, unforgiving—albeit admirable—work. Although war is always a loss, it can nonetheless be the correct choice. For this reason, the military trains its soldiers to bypass the moral implications inherent in taking another human life. The alternative to war may be worse than the consequences of military action, whether that military action be the State’s initial decision to wage war or the individual soldier’s duty to kill.

Perhaps by design, the four conscientious objectors profiled in Soldiers of Conscience have little in common other than—initially—their unifying desire to serve their country and—eventually—their inability to reconcile duty with conscience. Each soldier has an epiphany while serving in Iraq that forces the man reconsider the personal and moral sacrifices that the military requires. This “crystallization of conscience” pits the men against not only war but also the military itself.

Both Mejia and Aidan Delgado relate how the military ostracizes pacifist soldiers and views conscientious objectors as traitors, cowards or the enemy. Mejia, the first veteran of the war in Iraq to refuse re-deployment, is torn apart by the devastation he himself caused in Iraq; and Kevin Benderman, a third generation soldier and patriotic southerner, re-enlists in June 2000 only to discover that the war in Iraq is unconscionable. In a powerful scene, Benderman, a ten-year veteran, is quietly led from a one-room military courthouse in Fort Stewart, Georgia, following the 7-hour military trial for desertion that followed in the wake of his conscientious objection (two soldiers testified against him; Benderman and his wife testified in his defense.)

Staff Sergeant Thomas Washington describes the conscientious objector’s internal conflict as akin to “shaking up a pop bottle until it explodes.” Joshua Casteel, a former interrogator at Abu Ghraib and self-described “cradle conservative,” and Delgado experience the “crystallization of conscience” via their religious faith. Gradually, as a result of their cumulative experiences in Iraq, Casteel, an evangelical Christian, and Delgado, a budding Buddhist, each conclude that they are unable to reconcile the duty of a soldier in a time of war with the teachings of their respective religions. Mr. Casteel speaks eloquently of his recognition that “loyalty to a nation-state conflicts with loyalty to the kingdom of God.” Mr. Delgado doubted the morality of war as early as basic training and concludes after his deployment in Iraq that war is “outside of all moral law.”

Benderman says that during his time in Iraq, “I saw more than I wanted to see.” Conversely, it is amazing how little of the war in Iraq the average American actually sees. Like Charles Ferguson’s No End in Sight, Soldiers of Conscience shows footage from the war that is not available in newspapers nor seen on the evening news, including a real-time humvee explosion, Iraq citizens caught in war’s crossfire, and Delgado’s harrowing pictures of Abu Ghraib, which he tactfully explains are distinguishable from “war pornography.”

A military with a nuanced view of war is an ineffective military. In Soldiers of Conscience, the military acknowledges little difference between the war in Iraq and World War II. Wisely, the film refuses to debate the merits of the military doctrine. Still, it is inspiring to witness the growth of Mejia, Benderman, Casteel and Delgado as they shed ideological certainty and struggle with the morality of war through the prism of their individual experiences in Iraq. One ends Soldiers of Conscience believing these four men have extracted a personal “victory” from a war in which military success remains elusive.

P.O.V.’s Soldiers of Conscience, was directed and produced by Gary Weinberg and Catherine Ryan. It airs Thursday, October 16, 2008 on PBS.

The Rape of Europa

The Rape of Europa, a film about the theft, destruction and survival of Europe’s cultural treasures during the Third Reich and World War II, is fortunate to have Gustav Klimt’s luminous portrait of Adele Bloch-Bauer as its star. The Rape of Europa is bookended by the fascinating journey of Klimt’s masterpiece—out of the salons of pre-WW II Vienna; through a 60-year residence in Austria’s Belvedere Palace; culminating with the controversial 2006 restitution of the painting to Maria Altmann, the 90-year-old niece of the Viennese Jews from whom the portrait was stolen in 1938.

The portrait’s arc from private commission to spoil of war and then from national treasure back to family heirloom (and now crown jewel of Ronald Lauder’s Neue Gallery) provides an odd counterpoint to the forced peregrinations of the European Jews who were displaced and exterminated by the Third Reich’s murderous march across Western Europe. But it is the somewhat shark-eyed and passive face of Adele Bloch-Bauer and the golden mosaic of paint which cascades from her shoulders like a Ravenna waterfall that inspires reverence: this is a woman to covet.

Enter Adolph Hitler, stage right. The most notorious failed artist in history briefly possessed the world’s most impressive private art collection (twenty-seven (27) Rembrandts!) As Hitler ravished Europe between 1938 and 1944, he methodically and systematically accrued the finest cultural capital of the continent’s cultural capitols. Although Hitler purchased some of his art, the best booty was not for sale. Hitler envisaged an imperial city in his hometown of Linz, Austria, with looted paintings and sculptures from conquered European cities gracing the galleries of der Fuhrer’s national museum. The plan was to transform Linz, an industrial city, into an homage to both the Third Reich’s domination over Europe and the impeccable taste of the Reich’s Chancellor. Hitler’s vision for Linz and his attendant hubris would be laughable if the consequences were not so dire.

A great virtue of The Rape of Europa is its deft balance of artistic value with the human cost of war. Throughout the film, different commentators provide different answers to this sensitive question: “Can we put a human pricetag on priceless cultural achievements?” As The Rape of Europa repeatedly makes clear, the Nazis were not only the most efficient mass murderers of modern times, but they were also the most accomplished thieves. And it is unfathomable that the same Germans who orchestrated the extermination of millions of innocent Europeans simultaneously respected the finest works of European art.

The Rape of Europa takes great pleasure in pointing out that Hitler’s, and even moreso Hermann Goring’s, appreciation of European painting was pedestrian, at best. Hitler was enamored with the old masters but threatened by the late-19th and early 20th Century upstarts, many of whom produced strong works in response to the atrocities of the First World War. Because the Third Reich never met a purge it didn’t like, some of the greatest paintings of 19th and 20th Century art, including works by homegrown heavyweights Otto Dix, Max Beckmann and George Grosz, were either destroyed or banished as “degenerate art.” One could provide a nice overview of 20th Century modernism using only those paintings banned as “degenerate art” by the Nazis.

Although The Rape of Europa utilizes a broad canvass, the devil is in the details. The film explores the Polish genocide by means of the Nazis’ dynamiting of the Warsaw Royal Castle, an act of inenarrable cultural and psychological annihilation. The threat that German occupation posed to France’s rich cultural holdings is captured through archival footage showing Winged Victory strapped to and carried on a makeshift stretcher as she is shuttled from the Louvre to an undisclosed location in the French countryside on the eve of the Nazis’ siege of Paris.

Likewise, the empty Louvre is a powerful metaphor for a continent held hostage by the Third Reich, and the Nazis’ seizure of masterpieces from Jew-owned Parisian art galleries is heartbreaking. As the film explains, train after train departed from France rolling eastward, transporting the Jews of France to concentration camps while their personal belongings, stolen as part of the Nazis’ “Furniture Project,” trailed behind, bound for storage in Germany. One of the film’s most devastating scenes describes the post-War collection of unclaimed, confiscated torahs—piled to the ceiling in a warehouse in Munich and waiting in vain for the return of their rightful owners.

Commendably, The Rape of Europa does not let the Allies off the hook. A segment in the film’s final third relates the (unnecessary) Allied bombing of the Monte Cassino Abbey in Italy, and a present-day interview with an Allied soldier who fought in the Battle of Monte Cassino revisits the central question of whether a human price tag may be put on cultural treasures. Even more effective is the film’s discussion of the ongoing controversy regarding Russia’s “appropriation” of German-owned paintings in the aftermath of the War. In a kind of tit-for-tat, Russia confiscated a treasure-trove of German-owned artworks during the post-War reconstruction period. Although Russia slowly began returning the art shortly thereafter, the returns ceased in the early 1960s. Russia’s current position—supported by Russian nationalists and many of her citizens—is that Russia’s retention of the artwork is a necessary reparation for the 20-30 million Russian soldiers and civilians who lost their lives in World War II.

There is no empirical measurement of the human and financial cost of World War II. Conversely, the street value of Klimt’s portrait of Adele Bloch-Bauer was $135 million in 2006. Nevertheless, as the Rape of Europa makes plain, the true value of art—the power of art to reflect upon itself and provide a lasting monument to human existence—is, like the cost of war, unquantifiable.