So You’d Like Me to Contribute to the Democratic Campaign? Make Them Wear Diapers 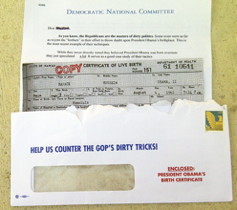 You get them. The letters from Obama or Debbie Wasserman Schultz. The calls from state Democratic candidates telling you what’s at stake. They show up around election time with increasing frequency – sort of like Obama’s speeches about “change,” and his embrace of progressive principles. In 2007, I gave what was for me, a lot. And I ended up feeling like Charlie Brown after Lucy snatches the football away – fooled again.

No more. Mr. Obama, Ms. Wasserman Shultz, Mr. Reid and the rest of you, here’s what you have to do to get my money this time. And you’d better start now.

Stand For Something Besides Compromise

You may not have noticed it, but Republicans aren’t interested in governing. They don’t believe in government. What they want is power and the reason they want it is to protect their plutocratic funders from a viable government. Trying to compromise with them is like trying to leap the Grand Canyon in ten-foot increments.

What should you stand for?

Us. The 99% of Americans who are getting shut out of the American Dream.

Start with the Budget4All introduced by the Progressive Caucus. It’s fair; it lays the groundwork for a broadly shared prosperity; and it balances the budget years before the for-the-1%-only budget Paul Ryan and the Republicans advocate.

Making this the defining issue of the next election is not only ethically right, it’s politically smart. Who wouldn’t want to highlight the fact that the Republicans are proposing to increase the deficit by advocating million dollar tax cuts for millionaires while raising taxes on the poor even while they whine about the deficit?

Talk about a winning issue. A defining issue. Trickle down “take ten” vs. shared responsibility and shared prosperity.

However, it can only be a defining issue if you are, in fact, different. But your desire to feed at the same corporate trough as the Republicans makes you indistinguishable from them. Do you really think being a pale doppelganger to crazed ideologues and plutocratic prisoners is good politics?

Run on Values, not Policies

Split-the-difference policies are what crushed the Democratic Party in 2010. Obama’s health care bill, his approach to budget reform, his strategy for regulating banks and Wall Street, his energy policy — all are examples of tactics over values.

This sends a message to voters that — to Democrats — nothing is sacred. While Democrats play Monty Hall on “Let’s Make a Deal,” Republicans talk about the sanctity of the free market, our Founder’s belief in a Christian nation; the “right to life”, the need for small (actually weak) government. Ironically, their values rhetoric is an empty facade, while the progressive policies you run from are substantive, and supported by the majority of Americans.

Tell people that government has been and can be a force for good. That it is usually more efficient than the private sector, that it has been a critical partner in achieving national prosperity, that it protects against corporate tyranny and secures the rights of citizens in a world in which moneyed interests are the new totalitarians and the real threat to our freedom.

Maybe, at least initially. The Republicans have run essentially unopposed for 30 years now, so restoring sanity to our national debate might take a while.

But hell, is gutting Social Security, Medicare, Medicaid, unemployment compensation, student loans and similar programs really winning? Never mind the politics. The fact of the matter is that these programs keep medical costs down, stimulate the economy, assure for our common welfare, create a world class workforce and do it at a much lower cost than the private sector does or could.

And is dismantling the New Deal programs that brought some 40 years of unprecedented and shared prosperity to the vast majority of Americans really winning?

Is allowing the steady and inexorable take-over of our country by corporate interests to continue unopposed a success?

Can pre-emptive capitulation ever be a victory?

In an era of he-said-she-said reporting in which the media acts as a mute, blind stenographer, mindlessly repeating what either side says, it might seem difficult to envision a meaningful debate.

But assuring one is really quite simple. Republicans have abused the filibuster, using it to shut down votes more often than at any time in modern history.

In times past, if a Party wanted to filibuster, they had to take the floor and hold it. In fact, it was known as taking to the diaper, because bathroom breaks often weren’t an option.

It’s time to make them stand amidst the stench of their own immoral argument as it mingles with the similar stench from their stale diaper.

Oh, and don’t try snapping that football away this time. Even Charlie Brown wises up after he’s been screwed enough times.

John Atcheson is author of the novel, A Being Darkly Wise, an eco-thriller and Book One of a Trilogy centered on global warming. His writing has appeared in The New York Times, the Washington Post, the Baltimore Sun, the San Jose Mercury News and other major newspapers. This piece was earlier published at Common Dreams.