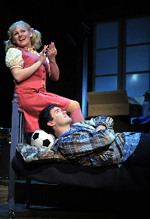 The good thing is that you will hear some great tunes from “Godspell,” “Pippin” and “Wicked.” But there is a problem fitting them into a sappy story about a marriage that is going down hill. Take the song “Popular” from “Wicked,” for instance. It’s a dynamic showstopper where it belongs and that is in the hit musical “Wicked.” Putting it in this revue made it a throw-away song. It had no spark, no excitement – it was just a pedestrian effort. Someone must have said – “Lets put that in right here, it’ll give the show a big boost.” Well – sorry, but that didn’t work.

We have all seen these kinds of revues before and they are all maudlin, dreary and depressing. It’s time to stop taking the works of one composer and as they say in revue world “Putting it Together”. There was “Tune The Grand up” about Jerry Herman.” Then there was another about Herman “Jerry’s Girls”. Other attempts at this kind of venue went passing through the night. They were all about Sondheim. And they were all boring. Remember or try to forget “Side by Side” and others too numerous to name?

No matter who the composer is – it all comes across as some sort of a ritual. Gee guys – lets take some songs from a well-known composer and write a little script around it. Unfortunately – it never works.

David Stern wrote the script or play about a dull couple who meet, fall in love, have children, fall out of love and rehash old times. It was epiphany time.

Composer Martin Schwartz whose songs you hear in “Snapshots” also gave some new lyrics for David Stern to use and some of the music was arranged by Steve Orich of Jersey Boys fame. O.K – with that stellar bunch of talent you would expect more – wouldn’t you?

Well I did expect more. The concept was a dud. It was just was one moan after another. The people were not that interesting, although the cast did do what they could with the entire funereal feeling of the show — taking songs from other shows and throwing them at a weak story is not going to cut it.

The set was interesting. The actors were charming – but it was an uphill battle to bring the musical to life. Even a male dressed as a Cheerleader couldn’t do it. Most people in the audience thought it was a real woman — they didn’t get the humor.

My advice: Close the Shutter on Snapshots.

23.000 cheering and clapping people couldn’t be wrong. They went completely mad along with Lucia, who rung every note until even the passing birds bowed their head.

Gaetano Donizetti, the composer wrote the largest number of operas (almost 70) of any composer who has at least one opera in the standard repertory. He wrote for other venues – but none of his non-operas are very well known.

This story is about love and hate. Lucia falls in love with a hated enemy of the Lammermoors. His name is Elgardo and he falls madly in love with Lucia and eventually that love leads to Lucia’s madness. There is a Romeo and Juliet ending. She kills herself and he then kills himself and throws his body across her. The singing is not to be believed. It soared around AT&T Park. You could hear a pin drop. Other neat things about this outdoor event is that when the lovers are in the Garden – real birds or maybe bats flew by the huge screen – giving the balmy evening a realistic feeling.

The two Scottish families have been feuding for years. In modern times they would be like the Hatfield and McCoy’s – two families that constantly feuded for generations. However, they didn’t sing – just shot each other.

Natalie Dessay is sensational. Giuseppe Filianoti (the lover) is handsome, in command and has a voice that probably could be heard inside the row of Condos on the Embarcadero.

This Grand Opera is a heartbreaking tale and a super size magnificent epic. You surely will go soaring and crying with these lost lovers.

Note: Some of the announcer talent from KDFC. (The Classical station) were broadcasting about the evening before the Opera simulcast. Dianne Mikeleni said to the audience: “Enjoy the show. Don’t worry I heard it has a good ending!” Really? Dying is happy? And remember she plays classical music and Opera all day. Does she ever really listen to them? Just wondering.

A CHORUS LINE IS COMING BACK TO THE CURRAN THEATRE ON JULY 8. The news is that SHN has launched an online audition talent competition called “B The One.” Who knows you could be the SF’s next singular sensation.

The contest will run June 24 – July 13th. Four men and four women who receive the most votes will each win a “Be The One” prize package, which includes two tickets to A CHORUS LINE and a $50 gift certificate for dinner, and A CHORUS LINE cast recording, and signed poster from the cast. Plus the eight finalists will then be entered in the next round of competition against other cities for a National Grand Prize.

TO ENTER – GO TO http://auditions.achorusline.com/san-francisco to create an online audition profile. Submissions may include video clips, photos or blog entries describing why you deserve to ‘BE THE ONE’. How high can YOU kick?