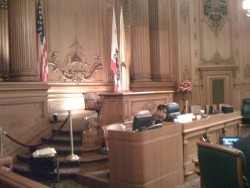 Not much happened at yesterday’s Budget Committee, as Supervisor John Avalos heads into negotiations today with Mayor Gavin Newsom. Stay tuned for the real fireworks at tomorrow’s final Budget session – which starts at 9:00 a.m. The Supervisors, however, took a small bite out of the Mayor’s budget yesterday – by voting 4-1 against a proposed $971,000 wheelchair ramp to the (currently unused) Presidential podium in the Board Chambers. Supervisor Michela Alioto-Pier complained about her lack of access to it last year, and Newsom even advised her to sue the City – in order to force an extensive renovation of the historic dais. But Avalos noted yesterday that many places in San Francisco are not currently ADA accessible, and the money could be used to restore cuts to health and human services that directly help many disabled people. The Human Services Agency also presented plans to shut three homeless shelters during the daytime, and Director Trent Rohrer said that closing one of them for 15 hours a day would save the City $160,000. But if that’s the case, why not also close the 311 Call Center at night? According to a Controller’s report last year, shutting down the non-emergency phone number from 11:00 p.m. to 7:00 a.m. would save about half a million dollars.