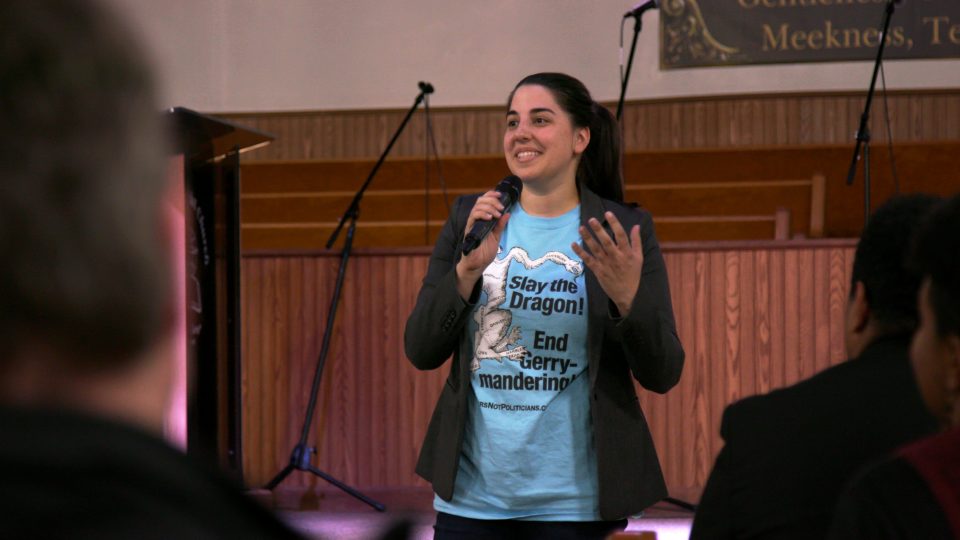 The politically apathetic rationalize their failure to vote by claiming  “if voting could change things, the government would make it illegal.” Barak Goodman and Chris Durrance’s alternately rousing and infuriating documentary “Slay The Dragon” provides a brutal reality check.  Power-hungry state legislators don’t need to outlaw voting. All that’s needed is preventing or neutralizing the vote of political undesirables.

Goodman and Durrance’s film ably explains in lay terms the two primary methods by which GOP state officials have accomplished “in plain sight” this undermining of American democracy.  Voter ID laws are publicly rationalized as a means of stopping the statistically insignificant occurrence of voter fraud. It’s not a coincidence that the types of people prevented from voting for lacking accepted government ID happen to be minorities, students, and other demographics perceived as possible Democratic votes.  Consider this: a Wisconsin Voter ID law prevented enough Democrats from voting to help this former bastion of progressivism go for the Orange Skull in the 2016 presidential election.

But as “Slay The Dragon” shows, the GOP’s bigger accomplishment was weaponizing the political redistricting process to create state GOP-dominant governments accountable only to the likes of the vile Koch Brothers and Walmart’s owners, the Walton family.  Rather than bury the viewer in the minutiae of how this was done, the film intelligently explains some key facts and principles to give lay viewers a working idea of what happened and how.

Gerrymandering, the relatively more familiar term for redistricting, has been used as a political tactic since the 19th century.  After the national census for the decade is done, whichever political party controls the state government takes local census information to redraw political district lines for both state and federal government.  The resulting districts would either help favored party members run for political office or help keep elected party members from being easily removed from office. In the past, state legislators having a personal and practical political knowledge of the areas where new districts were being created provided a degree of voter accountability to the state redistricting process.

What made the 2011 redistricting process in GOP-controlled states an act of political heinousness was that it was a key step in a long term GOP plan to cement state and federal electoral power for themselves for a decade or more.  The plan, known as REDMAP (Redistricting Map Project), was the brainchild of a GOP strategist named Chris Jankowski. Born out of the Republican Party’s ashes in the wake of Barack Obama’s being elected President, the aim of the plan was to aggressively take control of the state redistricting process to restore and even expand GOP political power nationwide.  For a relatively small investment of $30 million from the notorious likes of the Koch Brothers and the Chamber of Commerce among others, REDMAP delivered as promised. The GOP’s doctored redistricting gave them up to an additional 25 Congressional seats. The Republican-stacked state legislatures REDMAP created became law-passing sock puppets for the radical conservative agenda sought by their wealthy patrons.

Key to the GOP’s redistricted power increase were two gerrymandering tactics known as packing and cracking.  In packing, the aim is to pack as many non-Republican voters as possible into as few political districts as possible.  In cracking, district lines are drawn to break up and weaken areas where non-Republican support is heavily concentrated.  Whichever gerrymandering method was employed, the results were the same: insanely huge representative imbalances favoring the Republicans, and insurance from being removed from office in a general election.

Beginning with census information and voting history, GOP gerrymandering experts such as Jankowski and Tom Hofeller used Big Data to create GOP-safe voting districts with scientifically devilish precision.  Goodman and Durrance’s film does not incorporate the recent revelations made by Hofeller’s daughter Stephanie Hofeller about her father’s work. Interested readers can try tracking down the website the daughter created to show the world files from the man who considered redistricting the most profitable investment the GOP could make.

(In some circles, Obama’s alleged political incompetence was blamed for the loss of many state and federal Democratic seats beginning with the 2010 elections.  But in retrospect, the viewer can see those losses were the successful result of REDMAP in action. However, Democratic Party leadership do deserve some blame for complacently writing off 2010 as an off-year election and for not realizing the election’s long-term national importance.)

Viewers who think a discussion of gerrymandering makes “Slay The Dragon” an insider baseball film will be quickly disabused of that notion.  Wisconsin’s legislative attacks against its state public employee unions were aimed at weakening a major pillar of state Democratic power. If you despise the Orange Skull-friendly antics of House Freedom Caucus Chair Mark Meadows, you can blame REDMAP’s success in elevating him to the halls of Congress.

Most relevant to Goodman and Durrance’s film is the Flint Water Crisis.  The shameful details of what happened to the people of Flint has been reported in detail elsewhere.  What matters here is remembering the aforementioned insurance created by REDMAP. In practical terms, that highly partisan redistricting ensured holding the government officials who made the decisions creating the water crisis electorally accountable would be extremely difficult.  Primary challenges provided the only potential political blowback feared by legislators in Michigan and other GOP-controlled states. But the type of people who mount such challenges tend to be the sort who consider the mentally unhinged conspiracy theories of QAnon as gospel truth.

Fortunately for American democracy, making it incredibly difficult to bring about political change is definitely not the same as making it impossible to bring about political change.  Enter “Slay The Dragon”’s heroine, political neophyte Katie Fahey. She refused to accept that the GOP-rigged electoral district maps deserved to remain Michigan’s political status quo.  So in 2016, Fahey began a campaign to end gerrymandering abuse. Voters Not Politicians, the name of Fahey’s campaign, aimed to take redistricting power out of the hands of partisan insiders and invest it in a citizen’s commission.

The years-long course of Fahey’s campaign provides a perfect spine for Goodman and Durrance’s documentary.  As the film follows yet another step in Fahey’s campaign, background information explaining gerrymandering and the REDMAP project is skillfully eased in to both bring viewers up to speed and to understand the stakes Fahey’s citizen campaign is fighting for.

“Slay The Dragon” doesn’t minimize the difficulties faced by Voters Not Politicians.  The general public in Michigan had little idea of what gerrymandering was and its political importance.  Volunteer signature gatherers would be used to obtain enough signatures to put Voters Not Politicians’ reform proposal on the ballot, a feat previously accomplished only by the right-to-life crowd.  Finally, the forces that prospered from the existing skewed voting district maps would use their resources to sink the establishment of a Citizens’ Redistricting Commission.

But Fahey’s campaign had a couple of important assets.  One was that redistricting reform was a political issue that crossed party lines.  Democrats who saw what REDMAP created in Michigan were natural supporters. But Fahey also had allies in Republicans who still believed in such fundamental principles of democracy as public accountability and who had little use for what was essentially an underhanded power grab.

The other asset was that Fahey’s campaign had the moral high ground.  Voters Not Politicians stood for the principle that every person’s vote should count.  The Republicans who prospered from REDMAP couldn’t openly repeat to the general public American Legislative Exchange Council founder Paul Weyrich’s damning quote “I don’t want your vote to count”…even if that principle was the core of Republicans’ radical redistricting efforts.  So their attacks relied on vague fears (“too complicated”) or technical arguments (“unlawfully modifies the state constitution”) to defend their side.

Curious viewers puzzled by the film’s odd title will find their answer in a visual aside.  It turns out to be “Voters Not Politicians”’ campaign motto.

Naysayers of the film may try trotting out the “both sides do it” argument, pointing to a quote in the film from the late California State Democratic Senator Phil Burton.  He described a redistricting map he created as akin to a piece of modern art. But the late Senator’s bit of political mischief pales by comparison to the far more hinky redistricting method used by Wisconsin governor Scott Walker.  That process involved having the state’s redistricting computer moved to the offices of Republican law firm Michael Best & Friedrich LLP and keeping knowledge of the proposed redistricting maps on a need to know basis.

The other possible complaint that might be laid against “Slay The Dragon” is that it allegedly packs in too much information.  Not only does the film follow the redistricting reform fight in Michigan, but it also discusses the corruption of GOP-dominated Wisconsin state government, the Whitford lawyers’ efforts to challenge GOP gerrymandering in the courts, and the involvement of the vile ALEC.  But if there are a lot of different points of information in Goodman and Durrance’s film, they do a very solid job of showing how all the pieces fit. For example, the wealthy interests who bankrolled REDMAP received their return on investment via the practical rubber-stamping by these GOP-controlled state legislatures of “model legislation” crafted by ALEC.  It’s not too much of a stretch to state that such legislation is the polar opposite of anything Elizabeth Warren or Bernie Sanders would advocate.

“Slay The Dragon” may be a real-life cautionary tale.  But its greater importance is as a cinematic call to action to those who love American democracy to step up and prevent the money power from warping our country’s political processes yet again.  The year this review is written marks another zero year election. The 2020 census has already started up. Will this decade see a mass repeat of extreme right-wing political redistricting? Or are there other Katie Faheys willing to speak out and save America’s political system?