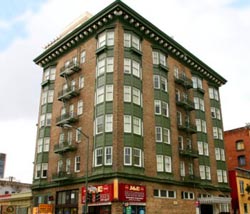 San Francisco’s largest residential landlord, a voracious acquirer of properties during the boom, has deeded 51 of its apartment buildings back to lender UBS. On Dec. 29, Trophy Properties, one of the limited liability corporations the Lembi Group operates, filed a “deed in lieu of foreclosure” on 20 properties. On Jan. 12, another 31 properties were given back to REF SF Properties, a company UBS set up to hold the assets. The portfolio the Lembi Group gave back included about 1,500 apartments, most of which are located in Lower Pacific Heights, Nob Hill, Russian Hill, the Marina, the Tenderloin and the Western Addition.

“UBS has taken possession of 51 residential buildings in San Francisco as collateral on non-performing loans,” said UBS spokesman Doug Morris. “Given the state of the economy and the capital markets, we feel retention of the properties is the appropriate business decision at this time.”

Walter Lembi, managing director of the Lembi Group, said that with the credit crunch crippling investment sales and the economy in recession, he was not able to sell or refinance the buildings. The two-year short-term loan on the properties, valued at between $300 and $400 million, matured in September. Lembi said the buildings were losing $3 million a month. He said the deal with UBS released $400 million in personal guarantees. “It takes tremendous pressure off,” said Lembi.

Lembi called the deal “a friendly transaction” and said his company will continue to operate the properties.

“They were willing to do it, provided we supply management — managing buildings in San Francisco is difficult,” said Lembi.

The deal reduces the Lembi group’s holdings to 250 buildings and 6,500 units, Lembi said. He said the Lembi group is still renting 120 to 140 apartments a month, and the portfolio has just a 2 percent vacancy rate. He said the rental market in San Francisco remains steady, but he called the current recession “by the far the worst” he has seen.

“Theres is so much negative energy going on every day,” said Lembi.

Investing $1.2 billion since 2003, the Lembi Group, which operates CitiApartments and Skyline Realty , built its apartment empire by financing multiple acquisitions simultaneously through cross-collateralized loans that Wall Street banks would then package. As the commercial mortgage-backed-securities market collapsed in the second half of 2008, the Lembis’ financing pipeline dried up. The altered landscape has had a drastic impact on the city’s multi-family housing market. In 2007, the Lembis snapped up 75 percent of all buildings that changed hands in San Francisco — 147 buildings that traded for $680 million. In 2008, when the Lembis made only a few acquisitions, the total sales in the city dipped to 48 sales worth $290 million, according to the brokerage Marcus & Millichap.

In 2008, as short-term debt came due, Lembi said the company futilely attempted to sell several portfolios of buildings. It also tried to sell a portfolio of 17 buildings for $112 million for the properties, which included 1330 Bush St., listed at $39.9 million, and 500 Larkin St., listed at $11.2 million, according to Cushman & Wakefield, which was handling the sale. Those properties were pulled off the market at the end of 2008.

Given the lack of financing available, and the Lembis’ inability to unload the buildings in 2008, it’s unlikely UBS will rush to sell.

“They are not anxious to sell them — you can’t sell a building today,” said Lembi. “You know what the market is like, and it’s getting worse every day.”

Lembi said the company is in ongoing negotiations to refinance other loans, but that the UBS situation was the most pressing. A $164 million loan on a 24-building portfolio that matures on Aug. 9 is being shopped by Credit Suisse, according to a Credit Suisse marketing package. Los Angeles-based CIM has bought the senior debt on the loan portfolio, but other pieces of the loan are still for sale.

James Devincenti of Marcus & Millichap said UBS should take the time to “have a real understanding of the value of these assets and the market we are in right now to determine if now is the right time to hold or sell.” He said the sale of the properties should be handled “very discreetly and in an organized fashion, as opposed to just accepting random unsolicited offers.”

“If the sales of these assets happen individually, those sales become comparable sales for other future sales,” he said. “This can have a damaging effect on the overall value of the remainder of the portfolio, not to mention the market as a whole.”

David Gruber, who owns 14 apartment buildings in San Francisco, said he had long warned other owners that the market was overheated. He said prices the Lembis paid was sometimes 18 to 22 times the buildings’ gross rent roll. Typically, investors in San Francisco balk at prices higher than 10 to 13 times gross rents.

“Nobody wanted to talk to me because I was telling people that these valuations didn’t make any sense,” said Gruber. “It was fantasy land.”

He said he expects rents to take a hit.

“Things are dicey,” said Gruber. “Downtown is emptying out. We rented an apartment on Saturday, and on Monday, the guy called up and was very upset because he thinks he is losing his job and was concerned about whether he could get his deposit back.”

The event puts a Swiss bank in the unusual position of owning dozens of apartment buildings in a city known for its contentious and complicated rent control laws. The Lembis have long clashed with tenant organizations and have become adept at navigating the restrictive rent control laws. Ted Gullicksen, who heads up the San Francisco Tenants Union, said the change in ownership is “trading one set of problems for another set of problems.”

“Our experience with foreclosures is that banks and property managers are not local and are ignorant in terms of the laws protecting tenants in San Francisco,” he said.

Walter Lembi called the current market “a great time to be a buyer,” but said his group would not be snapping up any new properties “until we stabilize everything.”

“Right now, it’s batten down the hatches, stabilize everything and hold on,” said Lembi.

DeVincenti of Marcus & Millichap said it would be wrong to count the Lembi Group out.

“They have been around for a long time and they will land back on their feet — they always do,” said DeVincenti.