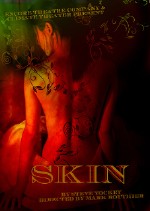 SKIN: Like La Ronde, this play is a merry-go-round about characters that move from one partner to another. A married man meets a woman that he sleeps with on the side. His wife knows that something is going on, but she really doesn’t care. The woman that the husband is sleeping with is not interested in long commitments. When the playboy husband tells her that he loves her, she tells him that she is not interested in a long-term relationship. “I thought you knew that I have slept with other men” – she says. Meanwhile the wife seduces a male friend from the office. He is committed to a girl that he loves, and feels terrible about the whole affair. Offices can be such fun. But that’s not all – more six degrees of separation get in on the fun.

In this intriguing play, the situations are quite risqué – and probably would have been banned not too many years ago. Yep folks — that is not Fog that you see over the Climate Theater – it’s ‘steamy’ sex. Well, they don’t actually do it in front of you. It is all cleverly and tastefully done underneath the sheets, with a flash of flesh here and there. However there is one actor that does appear completely nude on the stage. There is no doubt that he would have been banned in the 60’s. But, nowadays, we’ve seen it all hang out – it’s not shocking anymore.

Amorous encounters never go out of style. We are always interested in these interlocking love stories that go back centuries. In modern times it still goes round-and-around in bedrooms, cars, offices, Hotel rooms, etc. As they say, Sex sells. And ‘Skin’ is likely to sell a lot of tickets with its sultry staging that is almost like a beautifully choreographed ballet. There is a dreamy kind of feel to the play, as the actors drift onto to the stage at unexpected moments – sometimes from the back of the audience and sometimes from each side of the stage. The fluidity of this staging gives it a 3-D feeling.

Tyler Pierce and J.R. Horne in Crime and Punishment. It sucks you in! Photo: Kevin Byrne.

“Crime” does a great job of getting into the main character’s head. So good that you will find yourself wanting to hug this poor disheveled man, who is a murderer? After all he just killed two people with an axe. The play, like the book examines crime and repentance as the ‘hero’ of the story (the Murderer) actually endears himself to us. Why are we drawn to him? Could it be that we get too involved in the theme of redemption that runs through the play?

Raskolnikov ( Tyler Pierce) as the deluded young intellectual burns up the stage. Pierces uncanny ability to make this character believable should go down as one the greatest acting pieces of the year. His pain and suffering is almost too much to bear. The interrogator says to him: “You have a college degree but no job. Why is that?” Raskolnikov stares into space.

As the play goes on, Raskolnikov’s actions shout out his guilt. Like other Killers throughout time, Raskolnikov begins to think of himself as a superior human being. He justifies his deeds by saying that the shrewish pawnbroker was a hag that took advantage of people – so therefore she got what she deserved.

The interplay of the rest of the cast, J.R. Horne, Delia MacDougall (who play multiple characters) keeps us mesmerized with the great psychological depth. It’s not in your face kind of stuff – it’s their actions that show us what they are thinking. Thanks to the marvelous direction by Sharon Ott, the histrionics is kept to a minimum.

Right from the beginning, the main character is at the end of his rope and is dogged by humiliating poverty. What little money he has he gives to others. There is no food and he is constantly hungry. His clothes are dirty and torn and he lives in a basement hovel. So naturally we feel sorry for him — and wonder how such a bright young man could come to this.

I’m still thinking about the great performers that are so irresistibly vivid and absorbing in this by far – the best drama of the year. ‘Crime’ is 90-minutes of mystery and suspense. Every minute grabs you. Your eyes will be glued to Tyler Pierce’s dynamite performance. He cuts a wide swath.

Here are the extras: Written by Fyodor Dostoevsky. Adapted by Marilyn Campbell & Curt Columbus with sensational direction by Sharon Ott.

DOES THIS PIANO MAKE MY ASS LOOK BIG? You’ll find out in the new work (words & music) by Suzanne Ramsey. You will remember her as “Kitten on the Keys). This is a World Premiere (limited engagement) March 27 – April 5, 2009 (Fri., Sat. &* Sun.) Suzanne is a frisky one-ma’am band. Her new hi-jinks show is about a dorky suburban girl who is insecure, addicted, and socially impaired. But wait! – Her life changes for the Better with the discovery of punk rock and a burlesque rock & roll lifestyle. What you’ll see: Sequins, sass and funny video. Kitten is a little Judy Tenuta, Mae West, and a dash of Shirley Temple rolled up into one perky package. WARNING! The show is for adults over 18 years old only. At Mama Calizo’s Voice Factory in SF on Mission near Van Ness. Info: www.suzanneramsey.net. Also, Tix available at Brown Paper tickets. To view a YouTube clip of Kitten on the Keys visit: www.tinyurl.com.au/x.phmp?1omv

GET OUT YOUR LETTER SWEATERS AND POM POMS – CAUSE ‘GREASE’ IS COMING TO THE GOLDEN GATE THEATER. No he won’t appear! Gavin Newsom does have plenty of Grease in his hair – but he is not in the cast of this production but Taylor Hicks of “Idol” fame will be playing “Teen Angel.” Wed. March 25.

ACT A LADY: Men of a small prohibition-era town decide to put on a play dressed in “fancy-type, women-type clothes.” Well, you can just imagine what happens…Eyebrows raise and identities explode. Starts March 20 at the New Conservatory Theatre Center. www.nctcsf.org.