Singing Over the Walls Blue Thoughts From a Red State 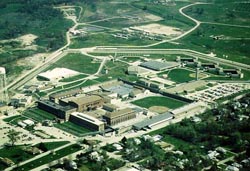 This week I went to prison. For choir rehearsal. As a participant in the Lansing (KS) Correctional Facility’s Arts in Prison Program, I attend a bi-monthly in-prison rehearsal with inmates and other volunteers. The choir consists of approximately fifty to sixty men of all ages and types, half of them volunteers and the other half inmates. And yet the program receives all of its financial support from private donation, a surprising fact given the impact this small program appears to have on inmates and community volunteers alike. “Do you have any idea,” one inmate confided in choir director Elvera Voth, “what it feels like to get a standing ovation when you’ve been told all your life you are absolutely nothing?”

Once upon a time, the goal of the United States prison system may have been to change lives. Now, however, the programs that do invite rehabilitation—like Voth’s choir—are few and far between. True rehabilitative efforts, in fact, are such an uncommon prison feature precisely because our system is collapsing under the weight of its own obsession with incarceration and a “tough on crime” attitude.

Arts in Prison and the Lansing Correctional Facility men’s choir offer an important alternative to this madness at a time when state and federal government (see the recent Bush budget) has little to offer. Similar to other grassroots prison services programs, Kansas Arts in Prisons arose in the last decade just as others like it developed nation-wide as well.

The choir is known as the East Hill Singers because inmates come from the East Unit of the prison, but the program has expanded far beyond this body of singers. It now includes classes offered to inmates in photography, ceramics, painting, poetry writing and other instrumental instruction, all financed privately

Elliot Currie, in his 1998 book Crime and Punishment in America, writes, “the state of California has opened only one college since 1984—and twenty-one prisons.” No doubt, the incarceration mania is not unique to California. Though “violent acts” have declined steadily since 1991, down by 20 percent this year as compared to then, the prison population in this country has risen by 50 percent.

And it is more than just numbers—the original intent of the prison system in this country was, surprisingly, revolutionary. This too has been lost: American colonists William Penn and later, Benjamin Franklin, promoted widespread penal reform even before the colonial revolt. Concerned with the way punishment rarely seemed appropriate to the crime in his experience as a Quaker in England, Penn, for example, pushed for the prison to be used as a place to remove the criminal from society and work toward his or her rehabilitation.

This was a relatively new idea, given that prison was typically not handed down as a punishment. Rather, it was used for witnesses and suspects awaiting trial—or, it was something of a dungeon, complete with torture chambers and basement cells where men rotted without rights or attention. For Penn and Franklin, the prison was a step toward humanity and a reconnection with the community—eventually—for the convicted.

Today, however, the penal system of the United States is a vast, privatized monster that has left the shores of rehabilitation in crass pursuit of money, cheap labor and the political gain of those who promote it. Most educational programs, for example, have been cut out of prison budgets on state and federal levels—programs like Arts in Prison, here in Kansas. Even worse, in a system that disproportionately hammers minority men and women, prison abuse is commonplace.

Documentary-film maker Jim Lipscomb, who has interviewed dozens of inmates in Ohio’s prisons, reports that so-called mental-health programs there, for example, often consist of little more than videos offering such platitudes as “If you feel angry at one of the guards, try not to curse and shout at him.” “That’s called mental health!” Lipscomb exclaims.

With major corporations like United Airlines and American Express pouring billions into underwriting new prison facilities, it is surprising that no matching funds have materialized for programs that restore and rehabilitate. These corporations, alas, are unlikely to raise their voices, given the huge financial loss they stand to suffer if prisons and, consequently, prison labor levels off or decreases.

More important, even, than the opportunities provided are the many ways in which the Arts in prison and chorus programs—and others like it—impact the inmates and the community, two groups that cannot be separated in the rehabilitative process. “[Inmates] learn,” Voth notes, “to work within a community, which most of them have never done. They have to learn that if they miss a rehearsal they hurt everybody. If they hit a wrong note everyone sounds bad.”

The choir sings everything from Verdi and Beethoven to traditional gospel and folk music. Inmate Michael Cobal explains that the program “has done more for my self-confidence, self-esteem and self-worth than anything I have done before, short of getting off drugs and finding recovery from addiction.”

His testimony is not alone. And when the community turns out to support this choir in concert—they sing all over Northeast Kansas—it adds another dimension to the restorative process by allowing inmates (some of who will be free sometime in the next few years) some sense of invitation back into the community as normal citizens. “My whole approach,” Voth says, “is that I want the men’s minds to be active. Most of the men who are there never in this life dreamt they’d sing in Russian or Italian. It proves they can do what anybody else can do.”

As long, I suppose, as human beings are human beings, there will continue to be criminals and their crimes—some of which require a firm, or even harsh response from society. Never, however, an inhumane one.

The United States prison system dehumanizes, exploits and lets rot inmates who are supposed to be a part of a system meant to give them a time-out from society before restoring them as fully accepted citizens. This reality makes programs like Arts in Prison all the more essential. And for this reason, I will gladly return to prison, week after week, to raise my voice with the other members of the choir as we sing over the walls of the East Hill unit.