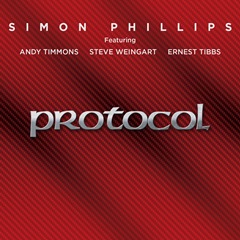 Drummer, composer and producer Simon Phillips is one of the greatest percussionists to hail from the British Isles. His resume includes stints with rock legends like Pete Townsend, and Toto, as well as his recent tours and recordings with jazz pianist Hiromi. Phillips has also had several solo outings that have been equally extraordinary; his trio “PSP with keyboardist Phillipe Saisse and bassist Pino Paladino, and his group Protocol. Last year saw the release of the phenomenal “Protocol II” album, featuring keyboardist Steve Weingart, bassist Ernest Tibbs and guitarist Andy Timmons. Bay area fans were also treated to several performances with Phillips in 2014 and this year, either with sensational jazz keyboardist Hiromi, or with his quartet Protocol, including a special listening concert last February at Yoshi’s in Oakland, which saw the debut of this latest effort, “Protocol III”

I absolutely loved the previous Protocol albums, especially Protocol II, with great tunes like “Upside In Downside Up”, “Enigma”, Octopia”, “Wildfire” and the wonderful piece by Timmons entitled “Moments of Fortune”. Could Phillips & company continue that trend with Protocol III? I’m pleased to say he has, and his fans will not be disappointed.

Phillips breaks the mold on the opening cut “Narmada”, featuring Satnam Singh Rangotra on tablas. Inspired by the late Joe Zawinul and his world music group, the “Syndicate”, Phillips continues to amaze, much as he did on the “21 Spices” album with Indian percussionist Trilok Gurtu. There’s plenty of odd metered percussion to keep most drum lovers happy; “Catalyst”, a tune that rollicks along in 17 and “Circle Seven”, co-written with long time collaborator Weingart. If you enjoyed Timmons guitar work on the previous album, you’ll surely dig “Outlaw”, a rockin’ tune from beginning to end.

Phillips’ song “Amrita” proves that he is still a composer quite capable of producing some truly beautiful pieces. Anchoring the grooves throughout album is Tibbs, known to many fans from his work with the great guitarist Allan Holdsworth. The musical chemistry between these four has gotten even better, which is all the more amazing considering how well they’ve been complimenting each other over the last few years.

Protocol is still one of the best instrumental, jazz-rock groups going, and Protocol III is yet another fine outing from one of the best drummers on either side of the Atlantic. Here’s a YouTube clip of Protocol III, (which Phillips has jokingly referred to as one of his record labels), performing live during their recent tour of Europe…