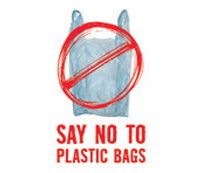 Here’s my take on this shopping bag reduction compromise. It’s not even the half step that Ross Mirkarimi characterized it. Let’s look at the numbers. There are 50-150 million bags each year given to consumer by the major supermarkets. Let’s say the number is 100 million. A 10 million reduction is 10% of the total. Better than no reduction, but come on, couldn’t the Mayor have done a little harder negotiating for at least a 20% reduction for 20 million bags? My guess is that the industry feels that a simple change of bagging habits for the clerks will easily yield far more than a 10% reduction and they can claim they are going the more than the extra mile and that will stop any talk about a bag fee or a meaningful reduction. Besides, that it is only a goal with no stick if they don’t reach that goal.

If this was a meaningful negotiation, there should reduction percentages for the next three years leading to a 50% reduction or 50 million bags by 2008, which I think is still too generous considering the cost of these bags for cleanup. City street cleaning costs are $2.6 million and collection and disposal for shopping bags alone is $3.6 million and this only part of the total costs.

Now what about the $100,000 donated to the Department of the Environment for monitoring the reduction. The Plastics Council had committed millions to stopping the bag fee and purportedly already spent close to $700,000 for a website and lobbying efforts in San Francisco. $100,000 is chump change compared to the savings for not spending any more money. The $100,000 is for conservation and recycling programs. What recycling program? At the moment less than 1% of these plastic bags are recycled and Sunset has no program for recycling them. Norcal will be in rate hearings soon and if they are expected to recycle them, you can be assured it will be added to the rate base.

The article states that the 17 cent bag fee had little political support. A bag fee of some kind had plenty of political support including the Sierra Club, SF Tomorrow, Rainforest Action Network, the Harvey Milk Club, the Haight Ashbury Neighborhood Council and SF Community Recyclers to name a few. There was a well-funded and organized effort by industry lobbyists to downplay that support and work the Supervisors with their flacks and newspaper friends.

My understanding is that Mayor Newsom was a supporter of a bag fee when it was first brought up, because he was persuaded that it was costly to the city and consumer to continue the current practice in place. The Mayor had good reason to be concerned. He didn’t realize the extent the Plastics Council and grocery association would go to forestall the first shopping bag fee in the United States especially in the environment friendly city of San Francisco. They really played hardball with him and he buckled with this compromise. Undoubtedly this will be game plan for any other city trying to cut their plastic bag waste. Establish easy goals to reach and throw a few bucks at the monitoring process.

You might think I am being too hardcore, but really we could do better and the Mayor should have gotten a much better deal. I have nothing against the grocers reducing bag use, but let’s have a credible decrease and some penalties for not meeting realistic goals.