Should We All Start Praying for Mitt Romney? 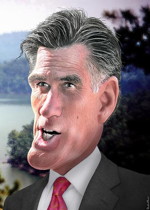 Absolutely. The GOP Presidential hopeful from Bain Capital has become a walking, talking object lesson on how plutocracy works – and why we desperately need to end it.

Egalitarians seem to be doing a lot of praying since Saturday’s GOP primary in South Carolina. If you listen closely, you can almost hear their prayer: Please, Lord, let Mitt Romney win the 2012 Republican Presidential nomination.

Why this swelling of affection for one of the richest Americans ever to run for the White House? Over recent weeks, Mitt Romney has put a long-overdue “human face” on American plutocracy at its job-destroying, tax-avoiding worst.

Thanks to Mitt Romney, millions of Americans now understand how private equity kingpins funnel fortunes — to themselves — out of middle class misfortune. And millions more, thanks to Mitt’s on-the-stump candor, now have a window into the world of people so rich that $370,000 — Mitt’s income from speaking fees last year — rates as “not very much.”

Every day seems to bring another “teachable moment” on plutocracy from the Romney campaign: the intricacies of the “carried interest” loophole one moment, the allure of Cayman Islands offshore tax havens the next.

All of this came before Mitt released his tax returns. That release, now expected tomorrow, will only redouble the scrutiny. Mitt has, to be sure, already spilled his basic tax return beans. His overall federal income tax rate last year, Romney has shared, hovered around only 15 percent.

Mitt’s campaign as a teachable moment machine does have one other fantastic advantage: Mitt had a wealthy father. Even better, Mitt’s wealthy father, American Motors CEO George Romney, released 12 years of his tax returns when he ran for the 1968 GOP Presidential nomination.

These papa Romney tax returns offer a window of their own — into just how amazingly rich people-friendly America’s current tax code has become.

How did George Romney’s tax rate compare to the tax rate of his fellow rich? George actually paid a smaller share of his income to Uncle Sam than his peers, mainly because he donated almost a quarter of his income to charity and church.

The true millionaires of 1960 — the 306 taxpayers who reported at least $1 million in income, the equivalent of $7.6 million today — paid taxes at a slightly higher rate, 45.8 percent. These millionaires only averaged, in today’s dollars, about a little over $15 million each in income.

How does that $15 million average for America’s richest in 1960 compare to the income of America’s richest today? The 1960 rich, even after adjusting for inflation, only made a tiny fraction of the incomes our rich today are pulling down. Last spring, the hedge fund industry trade journal reported that America’s top 25 hedge fund managers averaged $882.8 million — each — the year before.

Their tax rate? We don’t know that for sure. But hedge fund managers exploit the same “carried interest” loophole that has proved so lucrative to private equity power suits like Mitt Romney.

Statistics as revealing as these haven’t yet filtered into America’s political consciousness. But just wait. If Mitt Romney gets the Republican nod, the wonderfully illuminating national seminar on inequality that his campaign has become will be running, glory be, straight into November.

This article originally appeared on Sam Pizzigatti’s Too Much Newsletter.