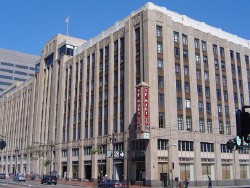 San Francisco is considering giving a payroll tax-break to Twitter to encourage it to move to 9th and Market Streets. Having outgrown its current space in the city, the social media giant is said to be deciding between moving to Mid-Market or leaving for nearby Brisbane, which has no payroll tax. The city’s proposal would likely exempt Twitter’s liability for payroll taxes above $250,000 annually – and extend the tax break throughout Mid-Market, and potentially to the Uptown Tenderloin. It’s a hard decision. Big corporations routinely hold communities hostage by threatening to leave if they are not granted tax breaks. Such breaks reduce desperately needed revenue, and contribute to city budget deficits. But attracting new businesses through such enticements can have a net positive fiscal impact, and local politicians who call a corporation’s bluff risk being blamed for job losses if it moves elsewhere. The Twitter debate is an early test for new Mayor Ed Lee and the Board of Supervisors’ ability to collaborate, and gives reason for critics on both the left and right to bash the outcome.

Progressives routinely oppose giving tax breaks to corporations threatening to relocate. Not only is it unclear whether local tax policies impact corporate relocation decisions, but in far too many cases – such as the absurd threat in 2001 by the New York Stock Exchange to leave for New Jersey, which won it a $1 billion tax exemption from Governor Pataki and Mayor Giuliani – the threat is pure bluff (Ralph Nader described the Stock Exchange shakedown as a “corporate welfare bonanza.” )

Conservatives love all tax breaks, particularly those granted to corporations. And considering that few California cities even have a local payroll tax, conservatives routinely support San Francisco granting exemptions. In 2004, even the progressive-led Board of Supervisors excluded qualified biotech companies from payroll taxes for their first 7 ½ years of operation.

So is Twitter’s request for an exemption more like the New York Stock Exchange bluff –few believed it would become the New Jersey Stock Exchange, and many doubt Twitter would risk losing cache by moving to Brisbane – or is it like the biotech deal, where the city felt it could use the tax abatement to attract new businesses and increase overall revenue?

The core question should not really be about Twitter; rather, it is whether the city should use some form of payroll tax exemptions as part of a broader effort to revitalize Mid-Market and the Uptown Tenderloin.

I think the city should offer such exemptions.

Both Mid-Market and the Uptown Tenderloin have struggled for over fifty years with creating an economically functional role in modern San Francisco.

For reasons that will have to be detailed in a future story, Mid-Market lost its economically viable identity as a theater district and has never found a new function. We still do not know what that stretch of Market between 5th and 9th Streets will become, but some form of payroll tax exemption will at least increase the likelihood of businesses giving the area a closer look.

The Uptown Tenderloin finally achieved a positive identity as a National Historic District, and at long last is reviving its historic role as a center for bars, restaurants and clubs. It has surprisingly few vacant storefronts and business opportunity sites. But while the Uptown Tenderloin needs a different package of business incentives than Mid-Market, the policy logic for proceeding is the same (though the potential revenue losses to the city are far less than for the large corporate employers considering Mid-Market).

Devil in the Details

The problem, however, is in the details.

First, if Twitter gets a payroll tax exemption (likely to apply above the first $250,000 in payroll), should the Orpheum and Warfield Theaters get the same even though they have no ability to shift their jobs to another location? If the goal is business attraction, should any existing businesses be covered?

Second, if existing businesses are not covered, you could have adjacent restaurants with similar sized menus and staffs with the new arrival being able to charge lower prices because of city tax breaks. And why should we in fact “penalize” those who had the courage to come to Mid-Market or the Uptown Tenderloin without tax breaks?

And what about the yet to be completed $15 million transformation of the Grant Building into a youth hostel/hotel with ground floor retail and a basement club? The project was started without tax incentives, so should this project benefit retroactively?

Nobody is suggesting City Place benefit from exemptions. So why should the Grant Building project be eligible?

Third, exemptions whose benefits start after $250,000 in payroll exclude the many small businesses who are desirable tenants for the retail spaces in both Mid-Market and the Uptown Tenderloin. Instead, such breaks create incentives for corporate offices, possibly fueling the area’s transformation into an extension of downtown.

Fourth, for those promoting Mid-Markets as an arts and theater district, most arts groups are non-profits who do not pay city payroll taxes. A tax abatement program does not help them, and could raise the cost for office space (which has not been in high demand in recent years).

Do we want corporations attracted by the payroll tax exemption coming to Mid-Market, pricing out the arts and theater groups who have expressed interest in opening there? Would a Mid-Market filled by corporate law and accounting firms, as well as high-tech offices, be viewed as a success?

Fifth, to help attract and maintain Uptown Tenderloin businesses a lower exemption cap is needed. The fiscal implications of the total package must then be sorted out

Corporations typically seek to maximize city tax abatements by imposing strict time deadlines, which put municipalities under the gun to grant the benefits or risk the consequences. Twitter is no different, forcing San Francisco to commit to a payroll tax exemption prior to a public hearing and fact-seeking process on all of the details.

While consensus on a broad economic stimulus proposal for Mid-Market and the Uptown Tenderloin could be reached in such a short-time frame, a rushed process could leave the Board of Supervisors feeling insecure about moving forward. After all, nonprofit groups and their supporters will soon descend on City Hall to fight budget cuts, and no Supervisor wants to be blamed for adding to the budget deficit by awarding tax cuts to a large corporation like Twitter.

In theory, attracting Twitter to 9th and Market through payroll tax breaks will pay for itself through increased property taxes from its tenant improvements and the additional sales tax revenue generated by patronage by Twitter employees. Whether Mayor Ed Lee can sell this case to the Board will soon become clear, and the payroll exemption may well be the first big test of whether we have in fact entered into a more collaborative spirit at City Hall.