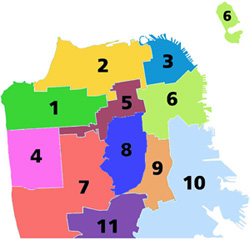 A proposed November ballot initiative is being floated that would enable San Francisco Supervisors to serve three terms, rather than two. Los Angeles voters recently extended term limits for City Council members, and the State Legislature is finalizing a term limits reform for the February 2008 state ballot. Conservatives have promoted term limits, and some progressives view limits as an important strategy for reinvigorating democracy. Would giving San Francisco Supervisors the right to serve a third term benefit local government, and, if so, would progressives gain from the proposal?

In studying the history of term limits in California, it is striking how right-wing interests were the leading backers of this reform. Conservatives clearly saw term-limits as weakening the power of government, though the California Legislature is clearly far more progressive today than when the state’s voters enacted term-limits in 1990.

The chief argument for term limits is that incumbents have so many advantages seeking re-election that politicians are free to become increasingly less accountable to their constituencies. Longterm incumbents are more likely to establish political “machines” which then select candidates for other offices, thus detracting from grassroots influence on our political system.

The main counter-argument is that voters should be free to select who they want to represent them. In addition, some term-limit measures are so restrictive—such as the three two-year terms in the State Assembly— that one legislative body becomes a revolving door of inexperienced legislators who are more dependent on veteran lobbyists to learn about issues.

In San Francisco over the past 25 years, incumbent Supervisors rarely lose. Jim Gonzalez lost in 1992, and Republican Anne-Marie Conroy lost in 1994 (she had been appointed to office and faced voters for the first time), and that’s it. The incumbents like Amos Brown and Michael Yaki who were defeated in 2000 do not really count, as they had previously been elected citywide and were now running in a district.

Since the return of district elections in 2000, no incumbent Supervisor has come close to being defeated. Incumbents Sandoval and McGoldrick both faced expensive opposition campaigns and were thought to be vulnerable in 2004, yet both easily prevailed.

Supervisors Maxwell and Ammiano have never faced a well-funded re-election opponent, and neither did Bevan Dufty in what many (wrongly) assumed would be a highly-competitive re-election race in 2006. Supervisors Daly and Peskin faced opponents in 2006 and 2004 that had neither name recognition nor a real base in the district.

Absent term limits, it is quite likely that none of the current Supervisors would ever be defeated. This conclusion leaves many loathe to end term limits entirely, but does not mean that there is a huge downside to allowing Supervisors an additional term.

The more relevant question for progressives is whether the Board of Supervisors would be better keeping the current group in office for an additional term, or whether the group impacted in the short-term by the proposed initiative—-Daly, Peskin, Maxwell, McGoldrick, and Sandoval—can be improved upon. Ammiano is running for Assembly in 2008, and Dufty has announced he will not seek another term, so their careers will not be impacted.

Under current law, Peskin, McGoldrick and Sandoval will see their terms expire at the end of 2008.

Peskin’s victory in 2000 was seen as a great coup for progressives, as he was viewed as the race’s most pro-tenant candidate. But while none of the talked-about candidates have Peskin’s deep understanding of city government, it is not at all clear that someone less progressive, or pro-tenant, would replace him.

Since Peskin’s election in 2000, the district added hundreds of tenant voters by its extension from Sutter to Post Street. A wave of Ellis Act evictions of longterm tenants in North Beach has raised concerns about the neighborhood’s future, and residents will want to elect someone who will protect the community’s economic diversity.

The most rumored candidate to run in District 3 is David Chiu, who was appointed to the Democratic Party Central Committee after Sue Bierman’s death. Chiu’s election is no sure thing, but it does show that a progressive would be a leading candidate in the race.

Jake McGoldrick has gotten more difficult to deal with as each year passes, and while he votes as a progressive quite often, he is not a close ally of Daly and Mirkarimi, the Board’s two leaders on the left.

Eric Mar’s name has been floated as a possible candidate for District 1, and he would be a vast improvement over McGoldrick. So there is clearly room for progressive gains in District 1 by keeping the current term limits law.

Gerardo Sandoval is a progressive, but never recovered from the terrible court ruling that required him to pay tens of thousands of dollars for the alleged filing of a SLAPP suit against GAP founder Don Fisher. Sandoval became disengaged from his job early into his second term, and his district is much more progressive than in 2000.

Sandoval’s successor might not be more progressive, but there is certainly the opportunity in 2008 to elect someone who will be more pro-active in promoting a progressive agenda.

Chris Daly would leave office in 2010 after serving for ten years. If he left office today, he would already have accomplished more for the causes I care about than any successor is likely to achieve.

But despite District 6 having the most effective Supervisor its residents could hope for, ten years is already two years longer than the two terms allowed under current law. While a more conservative candidate could win in 2010, it is the job of District 6 activists to make sure that does not happen.

District 10 Supervisor Sophie Maxwell exemplifies the case for term limits. She ran unopposed in 2002, and faced no opponent with any resources in 2006. Voter turnout in Bayview-Hunters Point has disintegrated during her tenure, so representation for a district that includes the city’s largest African-American community is largely decided by the high-voting, primarily white Potrero Hill neighborhood.

Maxwell is progressive on labor issues, and some housing issues, but she has led the fight to turn Bayview-Hunters Point over to the unresponsive and undemocratic Redevelopment Agency.

Maxwell would face little to no opposition in future races, while progressives could gain tremendously by electing someone in 2010 committed to greater resident decision-making over Bayview’s future. Given Potrero Hill’s progressive voting history, there is little chance of a more conservative candidate winning this seat.

So at this stage there appears more upside for progressives to keep the existing term limits law. On the other hand, there are those who believe that Daly and Peskin are so uniquely effective that new progressives in Districts 1, 10 and 11 will not compensate for their loss.

One question that also should be addressed: if term limits are being extended for the Supervisors, why not also the Mayor? Voters may be asking this as the Supervisor measure becomes more seriously considered for the ballot.