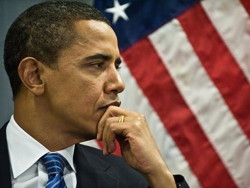 After President Barack Obama took office, progressives became divided over holding him politically accountable. Many argued that progressives needed to support the President against Republican attacks, even if this meant silencing criticism over his failure to fulfill promises to labor unions, Latinos, health care advocates and other progressive constituencies. Others disagreed, and I argued in December 2009 that activists were giving Obama a pass, and that their “continued refusal to publicly hold the President accountable will doom prospects for progressive change.” The rest, as they say, is history. Organized labor, a consistent cheerleader for Obama, got no labor law reform and could not even get the President to come to Wisconsin to defend unions. Contrast this with gay marriage advocates who threatened to withhold campaign funds unless the President supported the issue, and young DREAM activists sitting in at Obama’s Denver campaign office to demand the President institute the policy he finally announced last week.

The President’s implementation of a modified DREAM Act, his support for gay marriage, and rejection of the Keystone XL pipeline all show that progressives get action from Obama when he is publicly pressured to do the right thing. Yet some progressives still believe silencing criticism of Obama is essential in light of the political threats coming from the Republican Party.

For example, Vice-President Biden was the keynote speaker at AFSCME’s 40th Annual International Convention in Los Angeles this week. The Obama Administration could not find time to go to Wisconsin to help AFSCME workers, but the union now rewards the Vice-President with this public limelight despite not delivering.

Progressives are often told that criticizing Democratic Party politicians, unions, environmental groups and other progressive organizations simply gives aid and comfort to right-wing interests. This helps keep Democratic Presidents in “the center,” a popular place for the traditional media but a position that core constituency groups and many voters dislike.

In contrast, Tea Party activists and other extreme right-wing groups attack Republican politicians without hesitation, and have effectively moved onetime “moderates” like Mitt Romney and John McCain sharply to the right. Rarely do conservative publications chastise activists for lodging such criticisms.

This drive to stifle progressive dissent was recently seen in The Nation, which ran a June 15 article by University of Oregon Professor Gordon Lafer titled, “Left Anti-Unionism.” Among those Lafer identified as promoting “anti-unionism” was longtime labor advocate and Progressive magazine editor Matthew Rothschild.

The idea that Rothschild is anti-union is ridiculous on its face. In “I Will Not Be Silenced,” he described Lafer as aspiring to be “the police dog of the American left,” Rothschild defended his criticism of labor’s tactics around the Scott Walker recall campaign, and observed, “the essence of Lafer’s posting is that any criticism of organized labor from the left is de facto support for the Koch Brothers and their ilk.”

There is a long history of stifling labor union dissent, and it once was described as “red-baiting.” Today, with labor increasingly on the defensive, some progressives believe that activists need to focus on “the real enemy” rather than offering ideas that challenge the current union status quo.

Lafer’s posting produced a labor journalist free for all in which many echoed Rothschild’s analysis. Longtime labor activist and writer Steve Early asked “Where have I heard such accusations before – only for the last 40 years from self-serving, low-life bureaucrats in UMW, USWA, IBT, the building trades, AFL-CIO, SEIU, and even from some of the more benighted quarters of my own union, CWA. Washington DC PR and legal helpers of the corrupt gangsters who ran LIUNA 30 years ago even put out a similarly titled screed – exposing “Union Busters on The Left” – in response to investigative reporting in Mother Jones and The Washington Monthly that I and other union reform activists eagerly assisted, to help spur a long overdue clean up LIUNA.”

Stifling progressive dissent is not unique to labor, Obama, or the current historical era.
It is a longstanding strategy used by those in power. Its success depends on activists believing that all criticism of (allegedly) progressive politicians and institutions is destructive.

Fortunately, marriage equality and DREAM Act activists refused to remain silent. And progressive joy over progress in both areas reminds us of what Obama could have been forced to do on health care, job creation, and Afghanistan had progressive pressure also been applied on these issues in 2009.

Such progressive pressure could have resulted in victories that would have excited Democrats about voting in November 2010, instead of staying home disillusioned and enabling Republicans to seize the House. Time and time again we see how progressives holding politicians accountable creates progressive policies that are also good politics; in contrast, those seeking to stifle such dissent are clearly not committed to progressive change.

Randy Shaw discusses progressives’ use of a “fear and loathing” approach to politicians in The Activist’s Handbook.