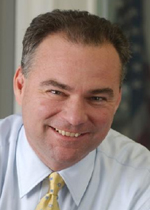 By most accounts, Barack Obama has narrowed his vice-presidential choice to Virginia Governor Tim Kaine, Indiana Senator Evan Bayh, and Kansas Governor Kathleen Sebelius. Since he is unlikely to pick a fellow Senator, it really comes down to a choice between Kaine and Sebelius, with the former considered the favorite. Progressives are already raising concerns about Kaine, who endorsed Joe Lieberman for President in 2004 over fellow Democrats John Kerry, John Edwards and Dick Gephardt. Kaine was subsequently elected Governor with strong grassroots backing, but his support among activists has declined. Here’s our assessment of Kaine—whose personal history has remarkable parallels to Obama’s, but who is neither as progressive nor polished as Sebelius.

Having written two pieces promoting Kathleen Sebelius as Obama’s running mate, I was disappointed to learn that Tim Kaine has become the current favorite. I’ve now read everything I could find about Kaine, and understand why Obama is so attracted to him.

At 50 years of age, Kaine is a contemporary of Obama. Like Obama, Kaine went to Harvard Law School. If Kaine is selected, it would mean a ticket where the candidates and their wives all went to Harvard Law, and where both spouses spent their undergraduate years at Princeton.

Kaine and Obama both grew up in Kansas. So the state that has gone the longest without giving its electoral votes to a Democratic Presidential candidate is guaranteed—through either Kaine or Sebelius—to have major representation on the Party’s 2008 ticket.

Kaine’s father-in-law is a former liberal Republican Governor who sacrificed his political career by supporting busing to achieve racial desegregation in the city of Richmond. It is said that the Obama’s view the Kaine’s as truly dedicated to the cause of civil rights.

Kaine’s greatest strengths are that he presumably locks down Obama-leaning Virginia, is Catholic, and has proven his ability to win elections in a “red-state.” He is not a Beltway politician (though he lives not far from Washington DC), and is said to convey warmth and empathy during public appearances (whereas Obama is often criticized for being too cool).

Kaine would also be 100% loyal to Obama, who he endorsed in February 2007. There would never be a doubt about his putting Obama’s interests first, something that cannot be said about former Clinton supporter Senator Evan Bayh.

Kaine supports so-called partial birth abortion, has a sketchy environmental record, and, while he apparently took no public position on the Iraq invasion, he has been quoted saying as late as 2006 that “it would send a horrible message to cut and run from Iraq.”

Kaine endorsed Joe Lieberman for President in 2004, selecting far and away the most conservative Democrat in the primary race. Lieberman was a major cheerleader for the Iraq War, and had already begun attacking the progressive wing of the Democratic Party.

Kaine is not particularly photogenic, has no foreign affairs or military background and almost no experience on the national stage. His favorability numbers in Virginia have fallen to 50%, though it is hard to assess such numbers when voters are deeply unhappy with all politicians over the state of the economy.

But even given universal voter anger, a common point made about Kaine is that he lacks a single prominent accomplishment as Governor. He thus contrasts unfavorably with his predecessor, Mark Warner, who is far ahead in his own race for the U.S. Senate.

I have come across no progressive activists who are wildly enthusiastic about his selection. I think progressives will respond to Kaine’s selection by first appreciating his ability to secure Virginia, and then figuring that Obama fulfilled the joke about his needing a running mate who was a boring white guy.

Unlike Kaine, Sebelius can tout several accomplishments as Governor. She recently vetoed bills seeking to expand coal-fired power plants, and has stood up to the powerful health-care industry. She is progressive on virtually every major issue, has a great relationship with Obama, and is far better more skilled in dealing with the media than Kaine.

What’s the main rap against Sebelius? Her pick would allegedly create a backlash by Hillary Clinton supporters, who believe that if a woman is selected it must be the former first lady.

Markos Moulitisas of Daily Kos fame had a great retort to such thinking. He noted this week: “After all the talk of Clinton breaking glass barriers, are her supporters still so hung up on her loss that they’re willing to create a new glass ceiling for women candidates, one that excludes anyone not named Hillary Clinton?”

As I recently wrote in praising Sebelius, her selection would bring a vice-presidential candidate who could be counted upon to avoid any of the “gotcha” quotes that hurt Wes Clark, Joe Biden, and others. Kaine is already being criticized for comments he has made about being considered for the ticket, and this is after only one day in the national spotlight.

Ultimately, Kaine or Sibelius will be completely loyal to the Obama agenda, which can be the biggest concern with a vice-presidential choice. While Kaine’s selection will likely leave progressives disappointed, he will not weaken the ticket, which should be the preeminent concern.

For all the talk about Mitt Romney and Tim Pawlenty, McCain’s increasingly remote chance of remaining competitive requires his selection of Florida Governor Charlie Crist. And he is likely to make this choice prior to the commencement of the Olympics.