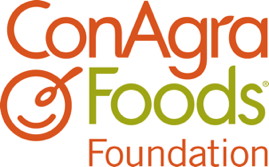 In the world of San Francisco school food, one of this year’s most hotly anticipated events is the upcoming release of a study commissioned by the SF Food Bank; the purpose of the study is to find ways to get more kids to choose school meals. Many parents, students, and school food advocates hope the study will recommend the building of a bond-financed central kitchen, enabling scratch cooking right here in SF with seasonal ingredients procured from local farms; the facility could be staffed by workers trained to do more than just reheat frozen meals, and be headed by highly trained culinary professionals from SF’s burgeoning stock of aspiring chefs.

The vision of fresh, healthy, all natural scratch cooked school meals is one shared by nearly everyone interviewed for the study last year, so it may come as a shock to learn that much of the cost of the study was paid for with a grant from the ConAgra Foods Foundation.

Big Food giant ConAgra, headquartered in Omaha, Nebraska, counts among its brands Slim Jim, Reddi Wip, and Snack Pack Pudding – all the very definition of “highly processed food.” The company was the target of a lawsuit in California last June alleging deceptive marketing of its Wesson brand cooking oil as “100% natural”, when it is, in reality, made from genetically modified organisms.

The SF school meal study, performed by Prismatic Services, Inc, was paid for by the SF Food Bank, with about half the cost covered by the $59,000 Community Impact Grant it received from ConAgra; no school district funds were used. Some might question whether it was appropriate for a plan to overhaul school lunches to be partially financed by the philanthropic wing of a company which was one of the major backers of the move to have Congress block changes to USDA-sponsored school meal programs.

Those changes would have cut the amount of potatoes served, and discontinued the practice of counting pizza as a vegetable; such action would likely have impacted the bottom line for such ConAgra owned companies as Hunt’s, makers of the tomato paste which qualifies pizza as a “vegetable”, The MAX brand frozen pizza for school food service, and Lamb Weston, whose website says it offers “the broadest and most innovative line of quality french fries and prepared potato products in the industry.”

An essay in The New York Times indicated that ConAgra submitted comments on the proposed new regulations questioning whether children want to eat healthier food. In the end, lobbying by ConAgra and other Big Food companies did block the changes, so kids across the country will continue to see unlimited amounts of pizza and potatoes on their school lunch trays.

Oakland also recently participated in a school meal assessment study, this one supported by the Center for Ecoliteracy in Berkeley. The Oakland study, which focused on the district’s inadequate nutrition services infrastructure, recommends a comprehensive overhaul of all district kitchen facilities, as well as construction of a new central commissary, and gives a realistic timeline of 6-10 years for completion, at an estimated cost of about $27 million. Oakland’s study cost $200,000 and was financed by grants from the S.D. Bechtel Jr. Foundation and the TomKat Charitable Trust, both based in San Francisco, and neither funded with Big Food profits.

ConAgra is not the only Big Food company making a show of being helpful in the same community which buys its products. Pepsi, General Mills, Nestlé, Kraft, and other major players all tout their good works. The Coca Cola Foundation provides grants for everything from school gardens to public parks. In 2010, Coke distributed $102 million to communities through its foundation, which sounds like a lot until you consider that in that same year, the company boasted of system revenues of over $100 billion. The company Chairman’s letter to shareholders that year also targeted the “growing, young, diverse and vibrant population” of North America, including an estimated 31 million teenagers by 2020, as a main reason why “we remain very bullish on North America.”

In other words, those same 6 year olds benefiting from the Coke-sponsored elementary school garden or playground today are expected to be consumers driving profits for the company a few years down the road. At least one elementary school is ensuring the kids make the connection: when their school received a $25,000 grant from Coke to renovate their playground, students at Howe Elementary School of Excellence in Chicago wrote thank you notes to Coke as assigned class work.

The involvement of ConAgra in the funding of the SF study is not necessarily a bad thing; regardless of what the study concludes, it is helping to start a conversation, long overdue, about what the long range vision for better school food in San Francisco should be. With San Francisco Unified School District facing another year of unimaginable budget shortfalls, there is not now, and not likely to be in the future, any school district money to support this kind of study, so any additional research (and there is bound to be more recommended in the study) will have to be paid for with outside funds.

Still, one legitimate concern is that the priorities of the Community Impact Grants emphasize speedy results; grant guidelines include, as a priority, “strengthening the internal capabilities, operations, and expertise of organizations to reach as many hungry and food insecure children as possible in the quickest, most effective way.” Certainly when it comes to feeding more hungry kids, it’s good to move as quickly as possible. However, as the Oakland study makes clear, the best solution may be neither quick nor cheap. Let’s hope the SF study is not afraid to call for a fully realized, permanent solution rather than settling for a cheaper quick fix.