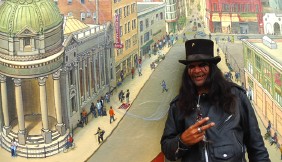 Mohamed Mouftakir’s FESPACO-award winning film “Pegasus” may start out as an enigma. Yet its resolution lies not in accumulating sometimes distrustful facts but in decoding ambiguous images. Was the traumatized hospitalized young Rihana impregnated by her village’s God of the Horse? Troubled therapist Zineb finds herself swimming in cataracts of dreams and visions as she attempts to understand the young girl and perhaps herself.

Mouftakir creates a cinematic world where identity, history, and even reality feel amorphous. Whether it’s visual storytelling cues designating time periods or a manufactured male identity for the young girl, the film makes the viewer wish they possessed the sacred horse’s ability to see the story’s emotional truths.

That task, though, is complicated by what one character calls the difficulty of erasing a lie one believes in. As “Pegasus”’ two female leads wrestle with the dreams shadowing their lives, it’s fascinating seeing which woman will wake first.

Paige Bierma’s short documentary “A Brush with the Tenderloin” concerns the making of the newest mural by Mona Caron, the artist behind the famed Duboce Bikeway and Market Street Railway murals. Caron’s mural of Tenderloin life is being painted on a building that’s catty-corner from the St. Anthony’s Dining Room customer line.

The film’s strongest moments comes from interviews with some of the colorful Tenderloin residents depicted in Caron’s mural. These worthies include gay kite maker Jeff Marshall and pronounced Alice Cooper fan “Indian Joe” Plamondon. Caron herself makes for a sweet interviewee.

Sadly, Bierma’s film never rises above bog-standard “making of” turf. One wishes a greater insight had been offered than that of art uplifting the wretched’s spirits.

Robert M. Young and David Grubin’s haunting documentary “William Kurelek’s The Maze” is a film that was literally forty years in the making. Begun in 1969, the cinematic biography of Canadian artist William Kurelek was finally completed after lost footage was recovered.

The film’s titular work is a symbolic painting of the interior of the artist’s skull. Details such as scientists examining a body in a test tube or a cat-o’-nine-tails which serves as a tongue make the viewer wonder what sort of life experiences could inspire such images. Young and Grubin decode the painting’s disturbing imagery through animation and interviews with the Kurelek family. The answers involve a father who fetishized material success and mental breakdown necessitating electroshock treatment.

The film chronicles Kurelek’s search for tranquility through his art and life. Yet ironically even when he finds a measure of peace, the shadow of past miseries lurks underneath his placid surface.

The shorts program “5@5: The Last Song” offers a mixed bag of shorts concerning important but untold personal stories. Neil La Bute’s “Sexting” stars Julia Stiles as a mistress whose meeting with a husband’s unsuspecting wife becomes a confession of her insecurities. Despite being essentially a dramatic monologue, Stiles’ looks provide insufficient cover for her pronounced lack of compelling acting chops.

“Saturn Rising” from Garry Bowden concerns a woman whose stress at announcing her pregnancy is complicated by suspicions of her boyfriend’s unfaithfulness. Lead actress Katharina Stenbeck’s mostly silent performance satisfactorily relies on body language and facial expressions to express her character’s confusions and fears. Bowden’s only misstep is his overextended final visual metaphor on the couple’s future.

Arron Shiver’s “Good Luck, Mr. Gorski” would have benefitted from a tall tale approach to its combination of astronaut Neil Armstrong and a neighbor’s sexual experimentation. Instead, the viewer is subjected to tedious nostalgia.
Giancarlo Iannotta’s pointless anecdote, “My Big Red Purse,” is only partially redeemed by its brevity.

The titular “Boy” of Topaz Adizes’ short finds hunting a wounded wolf becomes a symbolic ritual addressing both his divorced father’s emotional absence and his own maturation. The film’s naturalistic imagery only shallowly depicts events and offers nothing more.

Will Oldham’s hypnotic and ambiguous storytelling make David Lowery’s “Pioneer” a delight. This possibly centuries-spanning bedtime story about parental love and dedication will spark satisfying viewer disagreements regarding the motivations of Oldham’s character and the story’s ultimate meaning.

Trish Dolman’s documentary “Eco-Pirate: The Story of Paul Watson” doesn’t count as cinematic eco-terrorist glorification. Its subject’s messianic narcissism raises unsettling questions about the viewer’s commitment to their own ideals.

Dolman’s Watson is an eco-soldier dedicated to saving ocean life from humanity’s depredations. Footage of his expeditions against tanker-size killer ships makes one marvel at his determination. Yet the film doesn’t sugarcoat the fact that Watson’s dedication takes continuous toll on his personal relationships.

Viewers already upset by “The Cove” will have further reason to hate Japanese fishermen after watching Dolman’s film. The various dodges employed by Japanese whalers to avoid curbing their ecologically destructive practices makes one feel Watson’s actions are reasonable. For those who still find Watson’s tactics disturbing, they need to answer what should be done when appeals to moral ecological responsibility fails to prompt substantive change.