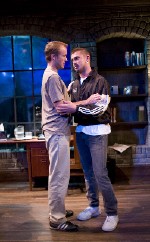 No one writes Ghost stories better than Conner McPherson. He is a genius at crafting amazing monologues. His gift for words is very apparent in this story about a Dublin therapist and a patient who comes to see the Therapist. The patients wife has just died and he is in shock and suffering grief. And, he also sees her ghost in the house. In the first 30 minutes or so, it is the patient who does all the talking. The Therapist only nods his head once in a while, but says very little. As a matter of fact most of the Therapist’s lines are “Yeah” or “Mmm.” The actors in this play really know how to flesh out the personalities of these two men. And that is especially challenging, given the long monologues that John, the patient has to deliver. There are many pauses, as he gropes for the right words. They come slowly as if he really doesn’t know what he is going to say next. This is great acting.

The Therapist’s office is sparsely furnished. There is a comfortable couch, a Chair for the Therapist, and an electric Tea Kettle near the door. The view out the window is fascinating. The light changes hues as the day goes on. The older man tells the Therapist that he sees his wife’s Ghost and that it disturbs him and he wants to stop seeing her that way. The Therapist says: “I don’t believe in Ghosts.” Ah – but he may change his mind later.

There are five scenes. After several visits to the office, his Patient (John) gets better. The Therapist breaks up with his girlfriend and goes to a park that is known as a pickup place for men who will do what you want for a price. He meets a young stud (looks dangerous) that he brings to his office. Again, we get the halted words, the feeling that both men are uncomfortable. Ian, the Therapist says that he is new to this and that he doesn’t know what to do. With that, the Hustler (or in Ireland, it would be a ‘Rent’ boy) reaches over and unzips Ian’s trousers. The lights go down and we are now is a later time.

The Patient John, now recovered from his mental troubles comes to visit the Therapist. The Ghost has left for good, and he has met a new woman. He seems happy and ready to get on with his life. The two men talk haltingly to each other. Ian, the Therapist is packing up his things in the office. And he explains to John, that he is back with his Girlfriend and that they are moving away from Dublin. He has guilt feelings about the “Park” incident and the direction his life is going in. He does not reveal this to his former patient. John says: “Well, we do what we’ve gotta do.” The patient is becoming the Therapist. They wish each other well, in an awkward way as he leaves the office.

As John leaves the door and the Therapist closes the door something stunning happens. I don’t want to tell you the ending – but I will say that it is an “other worldly” experience.

It leaves you with a chill, and a good dose of paranoia. It even could be called creepy. Shining City is complex and compelling. Once it gets rolling, you’re in for some really thought provoking moments. It’s never too late for a second chance.

The Director Amy Glazer has an “electrifying touch!”

Bill English has given us another outstanding set that becomes a “Star” in it own right.

THAT’S WHAT SHE SAID

KATHRYN LOUNSBERY AND AMY TURNER are Masters of hilarity, as they sing and make fun of stereotypes. Here are a couple of the things that are associated with Lesbians: Fanny Packs and U Hauls. Oh, and do they have a lot of fun with that. But the laughs don’t stop there; they have a whole slew of stuff to make fun with in the double entendre evening of song. They are really at the top of the ladder as they cleverly change the lyrics of familiar tunes to add Lesbian humor. Many of the songs that they sing are original music as well as lyrics.

The show reminds of “Dirty Little Show Tunes” that has played at the NCTC a couple of times. The girls have been quoted as saying “we aim to make the world smile – one dyke at a time.” It didn’t take much time at all before the audience was doubled over with laughter.

Not only is this a smart and slick comedy show, it also showcases the talents the two share. They can absolutely sing all venues, from ballads, operettas, rap and disco. It’s an amazing smorgasbord of styles. Amy sings most of the songs but Kathryn joins her on many of them. Kathryn is another wonder onto herself. She is the musical genius who manages to create an entire orchestra all by her self.

I loved their takeoff of Sonny and Cher – “I’ve Got You Babe” and couldn’t stop laughing at the song with the lyrics,” Pirates of Pants, Pants”. Some of it may be a little strong for some, like “Imagine these fingers tickling your ovaries.” In another song, it’s “Come-on Beavers, build your Damn!”

You get the idea. It’s Lesbian humor gone wild. They also mention strong women that seem to be a little man-ish. There is Eleanor Roosevelt, Helen of Troy, The unsinkable Molly Brown and Marie Antoinette. Another of the sung lyrics is “My Girl was hoping to get into my Kitty Cat.” Now, you can figure that out – don’t pretend that you don’t get it.

It’s a comic lift off that will put a smile on your face. Or, maybe I shouldn’t say it that way. Well, the show knocked L.A. cold – and they are doing the same at the NEW CONSERVATORY THEATRE. The show closes on Oct. 11. So, get your stuff in your ‘Fanny Pack’ and see this mad musical bouquet. It definitely will perk up your libido. Who needs Viagra?

A WORLD PREMIERE! It’s a story of two women’s volatile exploration of jealousy, anger, and need, set against the backdrop of a hospital waiting room. The show is called “The Horrible In-Between Place.” Buzzin’ always knew that hospital waiting rooms were dangerous. This new Theater Company, Ann Marie Productions (AMP) kicks off its inaugural season this fall. They aim to produce original work by new playwrights and emerging directors. Their first season will work exclusively out of El Teatro de la Esperanza. Previews: Oct. 30 & 31 and you can see it free at the previews. Opens Nov. 1st. Info: www.megan@amp-sf.org.

EVERYONE HAS BEEN ASKING why did we run a stock advertising photo of The History Boys, instead of the cast in San Francisco. Well, that was Buzzin’s intention – but a computer glitch didn’t see it that way. So, I am running a cast photo of the FABULOUS HISTORY BOYS RIGHT, HERE AND RIGHT NOW! See it at the New Conservatory Theatre and relive the exhilaration of your teen life. Take that unexpected flight again! Or, you could sit home and practice your pole dancing. Buzzin’ gives it FOUR GLASSES OF CHAMPAGNE!!!!

HOT PLAYWRIGHT IN BIG DEMAND. TOM KELLY, who just had a huge success with his play “Friends Forever”, is now sought after all over the world. Two of his short plays (“The Virgin Tango” and “Faded Photographs”) will be featured in American Shorts, “a collection of sexy new shorts by USA’s hottest playwrights.” Other featured playwrights include Jack Heifner, Ronnie Larsen, Jim Dalglish, Howard Walters, and David Johnston. American Shorts is the inaugural production at the ‘Above the Stag Theatre’, 15 Bressenden Place, London SW1E 5DD. The Director is Peter Bull. (Buzzin, Love’s the name.) American Shorts runs from October 28 to November 23, 2008. Info: 0844 478 0030.

GUESS WHAT ACTRESS SARAH PALIN IS CLAIMING NOW. Are you sitting down? She claims that she is a distant cousin of England’s PRINCESS DIANA. That’s O.K – you can laugh. A Celeb writes:: “Is she kidding? Shouldn’t it be Attila The Hun?” Another Celeb sez – “Hollywood is thinking of starring her as the Green Witch in the screen version of ‘Wicked’. Buzzin replies – Oh no, that would be type casting. Beside that, her singing would guarantee an empty movie theater.

AND THAT’S A WRAP