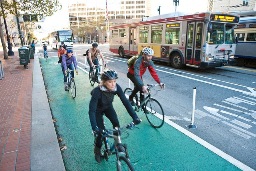 The San Francisco Chronicle has reported on a new idea that would shift Mission Street buses to Market Street while turning the former into the chief bicycle thoroughfare connecting to downtown. While this plan makes sense for the Hearst Corporation/Forest City’s new development plans for Mission Street between 5th and 6th, it would replace a potential “Better” Market Street filled with sidewalk cafes and bicyclists to one where Market is clogged with buses. It would make Market Street less desirable to pedestrians than it is now, effectively turning the $350 million set aside for the Better Market Street project into one whose chief benefits accrue to property owners and businesses on Mission.

So many cooks are involved in plans for reviving Market Street that it’s not surprising that an idea would emerge that undermines the entire concept. Traffic engineers are excited about the lower cost of installing separated bike lanes on Mission, and believe running MUNI buses on Market is more efficient.

But how does this serve the best interests of Market Street? Flooding Market Street with more buses and diverting bicycles away will not make Market Street more desirable for pedestrians, residents, customers of retail business, and attendees of cultural attractions.

Isn’t that what the revitalization of historic Market Street is all about? Returning it to the days when people flocked to Market because it was a great place to walk and to enjoy?

A plan for Market Street that excludes a segregated bike lane misses an historic opportunity to create a radically new urban vision. And it also shifts bicycles away from the adjacent Tenderloin, whose business and residents would benefit from easy access to a new Market Street bike thoroughfare.

Market Street’s excessively wide sidewalks create great opportunities for segregated bike paths. Check out these SF Bike Coalition photos of what bicycling down Market could look like if the longstanding plan for reviving Market Street proceeds.

The Better Market Street initiative is designed to prioritize Market Street’s revitalization. It should not be hijacked by those focusing on other goals.