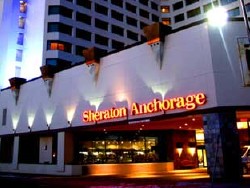 In 2006, Texas-based company Ashford Hospitality acquired the 370-room downtown Sheraton Anchorage hotel. Ashford has paired up with its hotel management company, Remington Hospitality Services, to carry out a brutal anti-union campaign that is singularly out of step with the history of cooperation between the hotel owners and workers who have built our successful tourism industry in Alaska.

Ashford/Remington’s assault on Sheraton workers and their union began in late 2009 after the union filed an unfair labor practice charge with the National Labor Relations Board (NLRB) against the Sheraton alleging bad faith bargaining. This first charge marked the beginning of the workers’ efforts to defend themselves against Ashford/Remington’s attempts to break their union and to compromise their job standards. Workers rallied to support each other against intimidation and retaliation and to speak out in opposition to management’s attacks against their union.

As an organized committee of dedicated employee activists grew inside the hotel, the workers’ actions became more visible. They began to conduct protests inside and outside of the workplace; they picketed, they rallied, and an overwhelming majority of them signed a petition to declare that they were going to start asking the public to boycott their hotel.

In February 2010, Sheraton management fired four workers shortly after they engaged in federally protected union activity. Fortunately, after the workers and their union filed charges with the NLRB and investigators threatened to seek a federal injunction, the Sheraton acquiesced by giving the fired workers their jobs back. Several months later, the union filed more charges, and by June 2010, the National Labor Relations Board’s office of the general counsel issued a complaint against the hotel alleging a wide array of additional unfair labor practices. One month later, hotel management announced that it was no longer going to recognize the workers’ union.

Since the Sheraton stopped recognizing the union, the workers’ struggle has intensified. Much of this struggle has focused on the ongoing legal battle between the Sheraton and the NLRB’s chief prosecuting attorney (general counsel) over the government’s unfair labor practice allegations. Many workers spent months giving testimony at a hearing before an administrative law judge of the NLRB over the allegations that Ashford/Remington engaged in illegal conduct in violation of federal labor law. One worker alleged in sworn testimony that before he was hired at the hotel, he was asked by a manager to sign a document establishing his opposition to having a union represent him. In the same hearing, another worker alleged that she was told by the hotel’s former general manager that those who didn’t sign the anti-union petition would be fired. She also alleged that the general manager named the three workers who were “causing the most trouble” by supporting the union and was told that they would be the first to be fired.

Although the trial has concluded and many wait for the judge to issue his ruling regarding the legality of the Sheraton’s conduct, workers continue to allege that the Sheraton is threatening, intimidating, and retaliating against those who speak out. In the past six months, at least six worker activists have been terminated – including two of the three workers who had been singled out by the general manager – and the union has filed over 30 additional unfair labor practice charges against Sheraton management. Other worker activists, many of whom are senior hotel employees, have had to endure significant cuts to their hours even during the busy season. One senior employee lost her home because she was not working enough hours to qualify for her mortgage.

For decades it has been Alaskans who have owned, operated, and worked at Anchorage hotels. Together, hotel workers and owners have coexisted, without the need for strikes, boycotts, and other divisive tactics. This all changed when Ashford/Remington began to conduct business here. As Alaskans, it is important that we stick together and let this outside company know that we will not allow them to take advantage of us by compromising our long held job standards.

Marvin Jones has been the President of UNITE HERE! Local 878 since he was elected by union members in 2000. He has led negotiations and bargained dozens of union contracts with employers from across Alaska. Prior to working on the union staff, Marvin worked as a bellman at the Sheraton Anchorage Hotel for 14 years.