Sheehy, Mandelman Square Off in D8 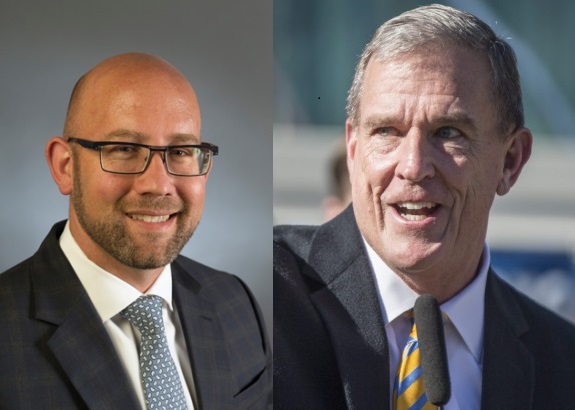 District 8 Supervisor Jeff Sheehy and challenger Rafael Mandelman meet twice in 2018, first in June and then November. If Mandelman wins in June he replaces Sheehy on the Board. If he loses, the two still meet in a winner take all contest in November.

Here’s my take on the candidates strengths and weaknesses.

Prior to becoming Supervisor Jeff Sheehy was best known for being one of three activists who conceived San Francisco’s landmark Equal Benefits Ordinance, which passed in 1996. Most companies did not offer domestic partner benefits in those days, and San Francisco’s law dramatically expanded equal benefits for lesbians and gays (who could not marry) across the nation.

Sheehy was working at UCSF when Mayor Lee appointed him to replace Scott Wiener.  Mandelman’s strong D8 showing in his 2016 citywide Community College re-election race led some in the mayor’s office to back Sheehy’s appointment; they felt he would be a stronger opponent for Mandelman than other potential appointees.

Since taking office, Sheehy has both backed critical legislation and prioritized constituent service.

Following a triple shooting near Dolores Park, Sheehy quickly convened an August 21 community meeting with police, the district attorney’s office, and other city officials to discuss systemic solutions to public safety issues around the park. Over 150 people attended.

Early this year Sheehy contacted the prior owner, Nutruceuticals, when he heard they were selling. He encouraged them to sell to a buyer who would engage with the community on the site. When the land was bought by a private equity group led by former 49ers football star Steve Young, Sheehy met with Young and got him to release a statement agreeing that the future of that site must serve the community’s interest.

Sheehy recently sent a letter with Rachel Swann of the Noe Valley Merchants Association asking Young’s group (which is now selling the property) to ensure that the new buyer engages in a “robust community process” regarding the site. Sheehy’s letter also urges the new owner to activate the space in the meantime.

Some Noe Valley residents, including Todd David (whose day job is head of the San Francisco Housing Action Coalition), see the Real Foods site as perfect for HOME-SF. David feels it could bring “desperately needed middle-income housing at the site,” something that upscale Noe Valley truly needs.

If a new buyer does try to use HOME-SF at the site, it sets up a sharp contrast with Rafael Mandelman. He opposed the measure (Note: Multiple sources told me that Mandelman opposed HOME-SF. He sent me an email in response denying this).

Sheehy is the parent of a daughter attending San Francisco public schools. Mandelman has no children but neither did Scott Wiener or Mark Leno. Nor did Bevan Dufty when he was first elected D8 supervisor.

Sheehy is not a “warm and fuzzy guy.” He does not have the handshaking, backslapping personality of a traditional politician. Those choosing the most  personable candidate are likely to favor Mandelman.

Some tenant activists distrust Sheehy because he favored increasing condo conversions over a decade ago and his husband works for Zephyr Realty. My sense is that pro-tenant voters will look at his supervisorial record in evaluating him.

Others believe Sheehy is vulnerable because of his relationship with Mayor Lee. They point to the defeat of Lee’s supervisorial appointments in D5 and D3 (Olague lost to Breed in 2012 and Christensen to Peskin in 2015) as evidence that voters don’t like the mayor picking their supervisor.

But voters did not see those appointees as effective supervisors. Katy Tang was also appointed by the mayor, and her outstanding performance as supervisor has ensured her re-election.

Rafael Mandelman lost to Scott Wiener in 2010 and then was elected to the Community College Board in 2012. He was re-elected in 2016. The combination of his College Board and successful Democratic County Central Committee races has meant that his name has appeared before D8 voters in nearly every election since 2010; as a result, Mandelman’s name recognition in the district may currently exceed Sheehy’s.

Mandelman is an attorney with the Oakland City Attorney’s office working on land development issues. His previous job was with a private law firm that handled transactions for nonprofit housing groups.

Rafael is a bright, engaging candidate with strong support in the city’s progressive community. He has been implementing Wiener’s 2010 strategy in trying to knock on every door in the district; I saw on Facebook that he was even knocking on doors on the Labor Day weekend that was the hottest in city history.

As CCSF trustee, Mandelman played a key role in getting City College back on track. He will win all of the key progressive endorsements and has won the trust of progressive activists.

Mandelman told me on September 11, “I am running because I have more relevant experience addressing the issues affecting the lives of District 8 residents, and I believe I will do a better, more effective job representing the interests of District 8 neighborhoods in City Hall.”

His message is about experience and effectiveness, not ideological differences. That increases his chances in a district where Scott Wiener, whose politics are not to the left of Jeff Sheehy, is hugely popular.

Rafael Mandelman’s challenge is winning in a district where the most progressive candidate has never won since the return of district elections in 2000.

I had lunch with Rafael earlier this year and asked him how he expected to win given D8’s electoral history. He said he was well aware of that history. He planned to run a campaign that emphasized experience and effectiveness over ideology. Based on what he told me yesterday, he is sticking to that strategy.

The question is whether there are enough voters who were happy with Wiener but are now unhappy with Sheehy. I’m not sure who those voters are. I do not see anti-Mayor Lee sentiment driving voters otherwise happy with Sheehy over to Mandelman.

Gavin Newsom, arguably the most popular politician in the universe for D8 voters, endorsed Sheehy. Newsom will be on the June ballot along with the D8 race. For Mandelman to win, he has to get a lot of Newsom voters to go against the former mayor’s pick for D8 Supervisor.

That will not be easy. And Newsom will again appear on the ballot with Sheehy in November (since Newsom is certain to finish in the top two in the governor’s race in June).

As of now, Sheehy looks to be in good shape. But a lot can change in politics in the nine months before June’s election, and even more before November.