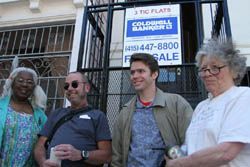 Housing activists continued their protest of Ellis Act evictions Sunday by conducting an ‘open house picket’ in front of a Potrero Hill property. The San Francisco Tenants Union gathered fifteen or so activists at 838 Potrero Avenue, where ten people in five units were evicted last November.

The organization has been using such pickets in recent months to inform and deter buyers who approach buildings where tenants have been evicted through the Ellis Act. Picketers have set up in front of these buildings during open houses, holding signs, distributing flyers and talking to potential buyers.

“I think they’ve been very effective at turning people away,” says Tommi Mecca of the Housing Rights Committee of San Francisco, who has joined several such pickets.

The tactic, says Ted Gullicksen of the San Francisco Tenants Union, “relies in large part on educating buyers.” Once picketers ask open house visitors to consider their social responsibility to the evictees, they frequently decide to look somewhere else.

For Gullicksen, that deterrence is a crucial element in stopping unjust Ellis evictions. When potential clients leave, he says, landowners pay attention, and the “base motivation for that [original] eviction begins to deteriorate.”

The need to prevent such evictions from happening, Gullicksen says, is urgent. He says that nearly every Ellis eviction site involves either elderly or disabled tenants and that these tenants are particularly likely to inhabit buildings that are ripe for establishing Tenancies-In-Common (TIC) to increase property value. “Nearly all seniors have long-term tenancies,” Gullicksen says.

The next step, he adds, is to solidify political support. With the Board of Supervisors’ support in prohibiting the conversion of TICs to condos–through Subdivision Code Section 1386, which forbids evictions “for the purpose of preparing the building for conversion”–Gullicksen aims to win self-enforcement from the Department of Public Works.

Section 1386 has generated some controversy between picketers and landowners. Some landowners have contended that TICs can be legitimately converted to condominiums in spite of the Ellis evictions. Activists like Gullicksen and Mecca have replied that Section 1386 makes such conversions impossible.

Some of the picketers are particularly sensitive to the issue of eviction. The 40-something Mecca remembers a large-scale displacement in his working-class neighborhood when he was growing up in South Philadelphia. He says his work in housing advocacy is inspired by a larger social problem. “I think this is all part of that sense of entitlement that people with money have,” he says.