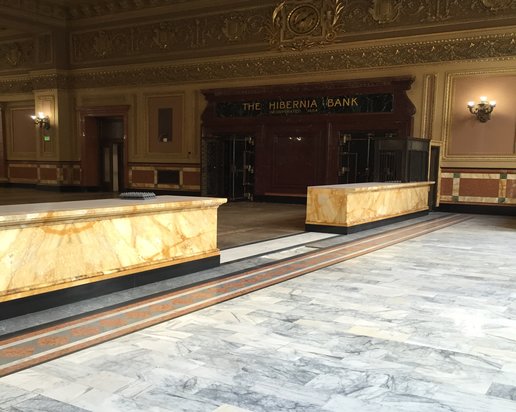 I toured the historic Hibernia Bank at 1 Jones Street in San Francisco’s Tenderloin yesterday. The building where I banked for years prior to its closure is more beautiful than ever.  It has the look and feel of a European palace. The restoration confirms its place as one of San Francisco’s top ten  buildings, and as one of the great structures of the United States.

The question now is who will be lucky enough to lease the Hibernia. Because for all the talk of nightclubs and tech offices, the property remains available to those offering a fair price.

When I banked at Hibernia I only saw the first floor. This week I had a chance to see all three floors, including the inside of bank vaults and the nooks and crannies where confidential documents were kept. You could spend an entire day inside the former bank and still not see everything.

Here’s a photo of half the first floor: 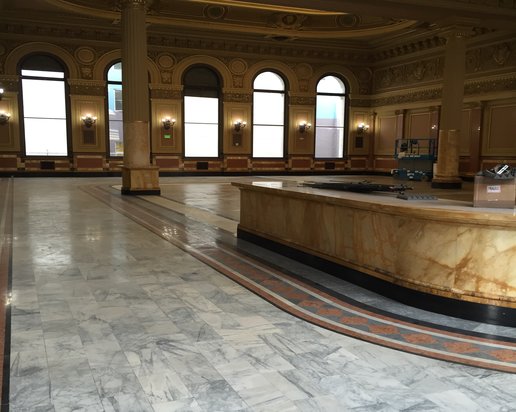 What’s really needed is for a top-flight photographer to get into the space and reveal all of its grandeur before it is occupied. Because once it’s leased, furniture will fill spaces and public access is likely to be limited.

The renovation is expected to be complete before the end of the year. As frustrating and costly as the process was of restoring one of the world’s great buildings, its owners accomplished something for not just themselves but the entire city.

Unfortunately for the owners, the long delayed renovation of the adjacent Renoir Hotel has left an unsightly construction site across from the Hibernia. The hope is that prospective tenants can overlook this, as renovations do seem part of the ongoing life in Mid-Market’s revival.

So those of you who have thought of leasing the Hibernia but haven’t got around to moving on it, don’t miss the opportunity of a lifetime to spend your workday into the only building in the Tenderloin left standing after the 1906 earthquake and fire (photos of this are in the Tenderloin Museum).

Randy Shaw is Editor of Beyond Chron.  You can learn more about the Tenderloin in his new book, The Tenderloin: Sex, Crime and Resistance in the Heart of San Francisco