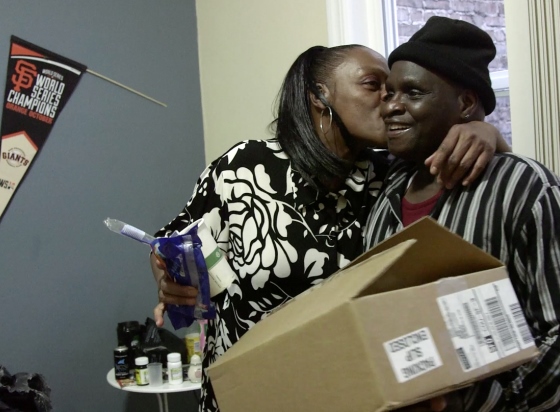 A homeless veteran moves in to SF supportive housing

While homeless campers have led some to despair over San Francisco’s efforts to reduce homelessness, this scene does not present a true picture. San Francisco has actually taken and is currently taking major steps forward in battling homelessness. San Francisco has added more permanent housing for homeless single adults since 2014 than at any time since Care Not Cash began in 2005. The city is having impressive success in housing homeless families despite the economic obstacles. The city has a successful Navigation Center and wants another. The Mayor’s December plan to create a Department of Homelessness will enhance coordination and is long overdue.

Of the cities with longstanding homeless problems, none have taken greater strides in recent years than San Francisco.  Yet so long as people are pitching tents on Division Street on the street, many wrongly deem the city’s homeless program a failure.

The problem is a skewed measure of success. We do not deem food banks, hospitals, schools and other service providers to the poor as having “failed” if they fail to serve all in need, but this unreachable standard is applied to city efforts to address homelessness.

It is also a problem that despite four decades of homelessness, many remain misinformed.

I thought of how the media contributes to this false public understanding of San Francisco homelessness when I saw an inaccurate but widely circulated headline in the February 8 San Francisco Chronicle, “S.F. spends record $241million on homeless, can’t track results.” The story claimed that “the city struggles to track exactly how all that money is being spent and whether it’s producing results,” and it called for a “single system” to “track street people.”

There are three major problems with the story.

Tracking Not the Answer

First, San Francisco does not have thousands of people on its streets because it lacks a tracking system. If you believe that is the chief problem, you do not understand the causes of homelessness.

San Francisco and other cities have thousands on the street because the vast majority cannot afford rent. There is a direct correlation between the federal government’s curtailing of housing assistance for the poor in 1981 and rising homelessness that began in 1982 and has never gone away (For background, see my story, “The Perfect Solution to Homelessness,” Sept. 2015)

It’s great to be able to track people on the streets, but that doesn’t provide them housing. San Francisco, New York City, Los Angeles and other major cities cannot house all the people who want to be housed—the problem is not a lack of tracking.

Nor would such a single system do anything to get people to go to shelters if they prefer living on Division Street in a tent. And that is what most of those complaining about homelessness are talking about.

The Chronicle sees significance in the fact that “fourteen years ago — a lifetime in politics — the city controller called for a single information network to ensure better tracking of homeless people as they seek services and better tracking of money spent to help them. There’s still no network and still no plan for one.”

Well, that wasn’t the only unfulfilled pledge made by a city official about housing and homelessness in the past fourteen years. And I don’t recall anyone telling former Mayor Gavin Newsom that he should put Care Not Cash on the shelf until he funded a tracking system. Controllers, civil grand juries, and the Board’s Legislative Analyst are always offering policy proposals, and if the Chronicle felt the tracking system was vital you would think it would have spoken up forcefully before now.

Some “experts” see tracking as vital. But this call for tracking reminds me of the many educational “reforms” urged as substitutes for higher paid teachers, smaller classes, and more school resources. They becomes alternatives to spending the money necessary to meaningfully address a social problem.

The second problem with the Chronicle story is that the headline falsely claims that San Francisco “can’t track results.” For the millions of dollars in Human Service Agency contracts, this claim is wrong.

The real problem may be that the media does not take the time to read these required reports. And not having read them, they act as if they do not exist.

SF Does Not Spend $241 Million on Homeless

The Chronicle story’s third problem is that while the $241 million annual homeless spending figure used in the heading is technically correct, the public should be reminded that much of that money ($112 million) is spent on people who are already housed.

Let me repeat this as many are confused on this point.

It’s almost automatic after a SF Chronicle story about homelessness for people to post comments calculating spending figures per homeless person. They do this by taking the number of homeless people (est. 6600), dividing it by the annual budget (241 million), and then concluding that San Francisco is spending $36,400 per homeless person—enough to put them all up in apartments for $2500 per month!

The problem, of course, is that when you subtract the $112 million for supportive housing, the per person homeless spending number is nearly cut in half. And when you take medical costs ($45 million), eviction prevention/rental assistance ($27.2 million), and child care ($2.5 million) out of the homeless budget, the city’s real spending on shelter needs and homeless outreach is roughly $55 million.

Now do the division with 6600 homeless people. It has the city spending roughly $8300 per person per year. Not enough to afford any housing in San Francisco.

My organization, the Tenderloin Housing Clinic, has master leased hotels for homeless people since 1999. Although 97% of the people we house soon leave homelessness, their rent subsidies and the subsidies for building operations, support services and property management remain in the city’s homeless budget for at least the duration of the typical twenty year lease.

Why are master leased hotels and other supportive housing not shifted from the “homeless” budget to the “housing” budget? Because the first mayor who implemented that accounting shift would face banner headlines, “Mayor Cuts SF Homeless Budget in Half!” So to avoid creating a false impression that San Francisco is reducing homeless spending, San Francisco since permanent housing programs for homeless people began in 1989 has included permanent housing (as well as rent subsidies for permanent tenants and medical services for the poor) in its homeless budget.

Help on the Way?

San Francisco is doing what it can with local dollars, but needs federal and state help. This week, President Obama FY17 budget request to Congress sought the biggest low-income housing funding increase of his presidency.

HUD will seek $11 billion in mandatory spending over the next 10 years to serve a total of 550,000 families with additional vouchers, permanent supportive housing, and rapid rehousing assistance.

An additional billion dollars a year won’t end homelessness, but it will house a lot of people who then won’t end up on the streets. Obama’s leadership could inspire politicians like California’s anti-housing Governor Jerry Brown to start spending serious dollars on his state’s worsening housing crisis.

Comparing San Francisco’s homeless programs to Salt Lake City, Phoenix or other cities that have never had our history of large homeless populations is a false measure. People are not coming from across America to pitch a tent in downtown Phoenix.

If critics of city homeless programs had a chance to meet some of the people whose lives have been turned around by getting into stable housing, it could lessen the anger directed toward the homeless population we see on social media. San Francisco is helping thousands of formerly homeless each year, and their success should not be ignored.