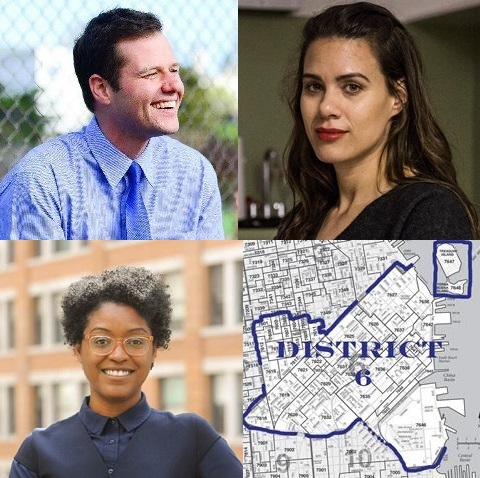 On July 18, 2017, I wrote “Who Will Replace Kim in D6?” A year later the answer is no less clear but we now know the field: Matt Haney, Christine Johnson and Sonja Trauss.

This is one of the most impressive supervisor fields in district elections history. We have a former President of the School Board, a former Planning Commissioner and leader with SPUR, and a woman whose aggressive pro-housing stances have helped transform the political debate around building housing.

District 6 would do well with any of them, but only one can win. Here’s how I see the race (I’m going in alphabetical order and will then reverse this in my next story on the race).

Haney had a hugely successful campaign kickoff last Saturday. He sent out a photo of the crowd that looked like a who’s who from the Kim-Leno mayoral campaigns.

The SF Examiner reported last September that “progressive leaders unite behind Matt Haney in d6 race,” and as that term “progressive” is often understood that appears the case. But London Breed got the most first place votes in D6 in the mayor’s race, and it’s not clear how Haney’s support from Hillary Ronen, Rafael Mandelman, Aaron Peskin and Jane Kim will translate into D6 votes.

The boundaries of D6 have changed since Chris Daly was first elected in 2000 and Jane Kim in 2010. The Mission is essentially no longer in the district, eliminating many of the voters who identify with traditional notions of who is “progressive.”

In addition, thousands of new voters now live in the SOMA portion of the district. They are less supportive of the anti-housing politics that too many San Francisco “progressives” espouse.

As I told Haney when I saw him on the street last week, having run twice for school board his supervisor campaign has shown a level of professionalism and organization that his rivals have yet to achieve. Haney is also a hard worker who has no problem being out on the streets morning, noon, and night to win over voters.

The larger question is whether Haney’s policy views are backed by a majority of D6 voters. We will get a good sense of where he stands on issues from the July 24 debate sponsored by the United Democratic Club, La Voz Latina, and the Eastern Neighborhoods Democratic Club.

Johnson was excluded from my story a year ago because she had decided not to run. Her multiple refusals to run led some pro-housing activists to encourage Sonja Trauss to enter the race, and these folks remain a bit miffed that Johnson is now running.

I described Johnson’s strengths and weaknesses in my January 23 story, “Christine Johnson Enters D6 Race.” I noted then that her late start had her playing catch up to her rivals both in fundraising and endorsements. Since that time Johnson has secured campaign staff but her fundraising was delayed by competition from the mayor’s race. Her June 30 financial report is likely to find her far behind her rivals in funding, but she is confident she will raise the money necessary to win.

Insiders are troubled by what they describe as Johnson’s lack of campaign visibility.  But candidates are better served skipping high profile events and attending the under the radar meetings that connect them with voters.

Johnson is an African American woman running in a district that just gave London Breed its most first place votes. I think the mayor’s results in D6 bode well for Johnson’s candidacy.

Sonja Trauss is one of the most politically influential activists of recent San Francisco history. Trauss’ public testimony about the need for the city to build more housing was once greeted with derision; her views have now become mainstream and could be said to have helped launch a movement.

But as I wrote a year ago, Trauss’ success at building the YIMBY movement has made her the enemy of anti-housing progressives. I am confident that Trauss would be a strong advocate for tenants’ rights on the Board but many tenant groups feel otherwise.

Trauss’ challenge is expanding her voting base beyond those who primarily care about housing. Unlike the pro-housing Johnson, Trauss is not identified with other urbanist issues. Many of her backers are eager to get a citywide advocate for housing on the Board, but a lot of D6 voters are more concerned about crime, public safety, and other issues.

Trauss got a bad break when her campaign failed to meet the deadline for public financing. This would cost her $155,000 in financing unless her appeal is granted on July 20.

Trauss’ best chance for victory is to finish ahead of Johnson and then to leapfrog over Haney by getting the bulk of Johnson’s second place votes.

The outcome of the D6 race will send a powerful message as to where San Francisco stands politically. When I see Tenderloin residents energized over an election—as they are in this race—than I know something exciting is going on in this D6 election.

Randy Shaw is Editor of Beyond Chron. Enjoy a great summer read with his book, The Tenderloin: Sex, Crime and Resistance in the Heart of San Francisco