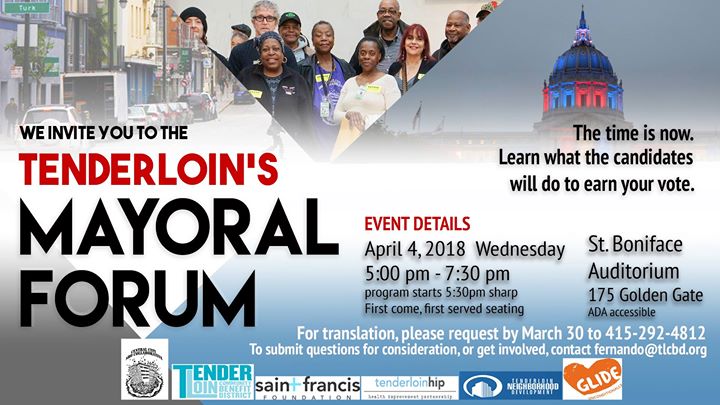 With absentee voting in the San Francisco’s mayor’s race beginning May 5, the three leading candidates are pursuing what they perceive as their surest path to victory. Securing firm voter support now is vital. Voters already committed to a candidate when the avalanche of negative mailings begins are less vulnerable to switching sides.

Considering absentee votes are expected to exceed Election Day voting, we are actually in the homestretch of the race. So what are the leading candidates’ focusing on to win this core support? Here’s my take.

Mark Leno’s campaign has definitely changed its message in recent weeks. Leno is now urging voters to “Make History” by electing the city’s first gay mayor. Leno has had several events with LGBTQ officials. He even brought in former Houston mayor Annise Parker, the first lesbian mayor of a major American city, to formally endorse his candidacy.

Why would a candidate who seemingly began with a lock on the LGBTQ vote still be prioritizing support from that constituency? The answer is that the recent firefighters’ poll that found Leno’s numbers declining showed him with less LGBTQ support than anticipated.

Hence the reminder to LGBTQ voters that they have a chance to “Make History” by electing Leno. And the stepped up appearances at events with LGBTQ leaders designed to identify Leno’s political fortunes with the broader community’s interests.

I’ve seen a lot more social media from Leno highlighting his gay identity than I have promoting him as the candidate of Change. As many have pointed out, Leno has the wrong history to play that role in this campaign (he was appointed to the Board of Supervisors by Willie Brown, and endorsed Newsom over Gonzalez in the 2003 mayor’s race and Wiener over Kim in the 2016 State Senate race).

Leno’s plan to be the Change candidate was formulated when he planned to be running in November 2019 against the departing Ed Lee Administration. Voters were not going to see Leno as the chief agent of Change candidate in a race against Jane Kim and London Breed.

Last week Leno won the first choice endorsement of the San Francisco Democratic Party. But this likely says more about the politics of the  political insiders who sit on the SFDCCC than it does about the broader electorate. After all,   John Avalos won the Party’s endorsement in the 2011 mayor’s race while the election winner—Ed Lee—did not get either of the Party’s top two endorsements.

Having deprived Leno of most progressive support, Kim is trying to do what she failed to accomplish against Scott Wiener in 2016: win more Westside and moderate votes.

One way Kim is doing this is by her winning personality and relentless focus on substantive issues. People who meet Kim or see her at events like her. They may not give her their first place vote, but they will consider her. I originally thought Leno would be the least objectionable candidate but both he and Breed seem to have far more strong detractors than does Jane Kim.

Kim’s only misstep was her March 15 Westside rally against Wiener’s SB 827. This was part of Kim’s strategy to secure moderate voters opposed to new housing in the parts of San Francisco where exclusionary zoning has been prevalent.

The problem with Kim’s event is that it was so transparently designed to win Westside votes. It played into a theme in campaign mailers used by Wiener backers in 2016 to portray Kim as flip-flopping on positions to win votes.

You can’t be telling voters that you’ve backed more housing than other supervisors (since more has been proposed in Kim’s D6) but then say you don’t want the Westside to play its role in addressing the city’s housing crisis. Or actually you can take these positions but it won’t help you get elected.

Kim heads to the homestretch in far better position than she imagined when the race began. Only two obstacles stand in the way of her winning the mayor’s race or finishing second.

The first is projected low voter turnout among younger voters, where Kim does especially well (as I previously wrote, there was only a shocking 3% voter turnout for those 18-24 in the recent Illinois statewide primary).

The chief obstacle to Kim’s success are the onslaught of negative mailers that successfully swung her State Senate race to Wiener. In particular, Kim has taken positions on homelessness that do not play well on the Westside or among moderates; the question is whether her personal connections with voters will make these mailers less effective.

Breed must be the consensus frontrunner as she gets the most attacks from other candidates. Leno’s camp relentlessly attacks Breed while saying nothing critical about Jane Kim; that should tell you how Leno’s team sees the race.

Breed’s strategy for winning is obvious to anyone who follows her on social media: she is constantly campaigning in the Richmond and Sunset. That’s where most believe the election will be decided, as no candidate has a clear hold on a constituency that twice backed Ed Lee by large margins.

Breed recently got a huge boost when Assessor Carmen Chu, arguably the most popular Westside politician, endorsed her. Supervisor Katy Tang and Assemblymember David Chiu previously endorsed Breed, giving her a trifecta of popular Chinese-American leaders to woo Chinese-American and other Westside voters.

When the race began, Breed’s path to success seemed narrower because many assumed Leno and Kim would get the second choice votes of the other. But polls show otherwise, with Breed showing surprising strength across the city. Scott Wiener’s endorsement of Breed yesterday seems designed to get LGBT voters to make Breed either their first or second choice. This is a huge plus considering the high number of LGBT voters expected to cast ballots.

One election face often overlooked is that Breed’s District Five typically has a very heavy voter turnout. If Breed only gets those who voted for her in her 2016 race against Dean Preston, that’s 21,000 votes. In 2016 Breed got 2000 more votes than Aaron Peskin, 3000 more than Hillary Ronen, and 7000 more than Norman Yee.

Breed has been criticized for skipping various mayoral forums. A Facebook query on the topic by the SF Examiner’s Joe Fitz Rodriquez unleashed a torrent of anti-Breed attacks, and the SF Weekly’s Nuala Sawyer then wrote a story about Breed’s “spotty attendance.” Sawyer claimed that “the types of forums Breed is skipping, and what she’s choosing to do instead, sends an interesting message about her campaign priorities.”

It sure does. It tells voters that Breed has only one goal in this campaign: to win. And if the path to victory means speaking to uncommitted voters in a house meeting in the Excelsior instead of appearing at a mayoral forum filled with volunteers and staff from other campaigns, that’s what Breed will do.

Breed is attending the Tenderloin mayoral forum on April 4 and has been to over a dozen others. Anyone who wants to hear from Breed or the other major candidates has no problem doing so.

This week is the calm before the storm. The San Francisco mayor’s race will soon be visible everywhere. Those looking forward to the atypically short five month campaign sprint to Election Day will begin yearning for the race to finally be over.