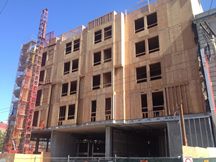 The political consensus supporting increased affordable homeownership in San Francisco faces a challenge: the current program is a nightmare for buyers of Below Market Rate (BMR) homes.

BMR units are created through the city’s inclusionary housing program, which requires private developers to provide a percentage of affordable units. They meet this requirement by either paying an in lieu fee to the city or providing below mark rate units for purchase or rent on site. The In lieu fee’s inadequacy has been widely criticized, and may be eliminated as an option when the Mayor’s Housing Working Group unveils its new plans by July.

This leaves on site affordable units as the city’s chief strategy for increasing middle-class homeownership. While all-affordable homeownership developments are still being built, most new opportunities are included in market rate projects.

So if the city wants to enable middle-class families to become homeowners in San Francisco rather than moving out of the city, it needs to create the necessary incentives. And for all the debate over the inclusionary percentage that market-rate projects should be required to meet—be it 12%, 15%, 20% or even 30%—this means nothing if the purchase is a bad deal.

Here’s why it is.

Why would middle-class family buy housing in San Francisco that will never appreciate in value when they can purchase a single family home in the East Bay or South Bay for the same or lower price and get the full benefits of rising real estate values?

Or to put it another way, is it really better to buy than rent when the latter costs far less for comparable or even superior housing? Many middle-class San Francisco tenants for whom incentives for affordable homeownership are sought have below-market rents and live in desirable housing and neighborhoods. The city’s BMR program asks them to give these benefits up in exchange for higher monthly housing costs and entirely unrestricted HOA fees.

When you deny buyers increased equity in their housing, and subject them to unrestricted condo association fees, that’s a bad deal.

While BMR homeownership, unlike renting, allows housing costs to be deducted from taxes, the program leaves owners with less cash each month and with barely any increased equity when they desire to sell. They are in an even worse position to become regular homeowners because they have been on the sidelines while home prices continued to rise.

Such an unfair program cannot be sold to San Francisco’s middle-class as their gateway to the American Dream of homeownership.

Fortunately, an obvious administrative fix exists: allow BMR homeowners to reap limited annual increases in equity. This notion of limited equity housing was the preferred progressive solution to rising housing costs as far back as the 1970’s, but a combination of lender resistance and the lack of incentives in the tax code prevented his housing model from reaching its potential.

If BMR owners could be allowed appreciation up to the annual increase in the consumer price index (usually around 3%) that would give them 30% appreciation over a decade. That’s still a lot less than the appreciation of market rate units, but the appreciation at least helps cover their steadily rising HOA fees (that these fees are unrestricted is why BMR single family homes work far better than the far more plentiful condos).

Allowing BMR owners to reap a 30% appreciation over a decade would still leave their unit far below market if sold at that time. So the city’s goals of increasing middle-class homeownership, maintaining the supply of BMR’s and treating BMR buyers fairly are all met.

The alternative to limited equity is to make all BMR’s rental. That’s the best economic deal for tenants, but does not increase homeownership opportunities for San Francisco’s middle-class. It also forces all housing developers to become landlords, which would likely generate opposition.

Politically, San Francisco cannot abandon efforts to increase affordable homeownership. The issue is so popular across the political spectrum that there was no criticism when Mayor Lee recently announced he was doubling the city’s maximum downpayment assistance to $200,000. As recently as 2007, many housing advocates opposed increasing downpayment funding because they felt public assistance should be instead targeted to those of lower incomes; today, all Supervisors support an agenda for saving the city’s middle-class.

The Mayor’s Housing Task Force should recommend changes that solve this problem. In the meantime, the city should stop promoting its longstanding affordable homeownership program until the necessary changes occur. San Francisco needs to help its middle-class, not encourage its investment in a real estate deal whose downside becomes clearer with each passing year.