SFPopfest Comes to the Hotel Utah 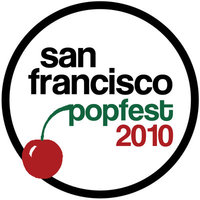 This Saturday afternoon, two of my favorite pop groups, The Orange Peels and the Corner Laughers will descend on the Hotel Utah as part of the four day, SFPopfest 2010. Joining them will be New York’s Dream Diary and Sweeden’s Leaving Mornington Crescent. The Peels songwriting tandem of Allen Clapp and Jill Pries remain intact, however the ever evolving line-up moves the ridiculously versatile John Moremen from behind the drum kit and back to his first love, lead guitar. Taking over the drum chores is the very capable Gabriel Coan. This could be one of the best Peels line-ups yet. The Corner Laughers are another product of the fabled “Mystery Lawn Studios” in Sunnyvale. The sweet vocals of singer Karla Kane and the rock solid bass of Khoi Huynh have produced some of best pop tunes I’ve heard in some time. Alongside the rhythm guitar of Angela Stiletto and the “Bonham-like” drumming of Charlie Crabtree, the Laughers blew my mind with their incredibly poignant hit, “Stonewords”. Don’t take my word for it, a synopsis of all four bands from the SFPopfest website follows.

THE ORANGE PEELS (Bay Area)
“I have always had a special liking for The Orange Peels and I believe that after checking out their new record 2020 you will quickly become a fan too. It has been four years since the band released their last record but 2020 shows that they have not lost one step as their blended style of Brit rock and California power pop is in complete full form. As the title suggests, 2020 deals with perceptions. Being released on the precipice of a new decade, the album is as much about looking back on 10 years gone awry as it is about looking forward to the promises of the future. The Orange Peels do this with quick sharp guitars, soaring melodies and strong rhythms that drive each track and will keep your feet tapping all the way through.” http://www.theorangepeels.com/

THE CORNER LAUGHERS (Bay Area)
“Anyone in need of a catchy indie-pop sugar rush frothing with humorous, whip-smart lyrics could do a lot worse than check out the Corner Laughers. Ultraviolet Garden finds the Bay Area quartet, while not exactly wigging out like rock gods, picking up the pace and adding deft power-pop touches to its mixture of ukulele-led sunshine folk-pop and girl-group harmonies and handclaps from its 2006 debut Tomb of the Leopards. Helped out by the Orange Peel’s Allen Clapp in the producer’s chair and Charlie Crabtree, permanent “bad-ass” drummer since 2007, Karla Kane (lead singer/ukulele), Angela Silletto (guitar/backing vocals), and multi-instrumentalist Khoi Huynh regale us with melodic story-songs of fickle lovers (“For the Sake of the Cat”, “Dark Horse”), ghostly catacombs (“Dead Sicilians”), the extinction of an unconfirmed species of giant bird (“Thunderbird”), and an epic lullaby about earth’s total destruction (“Space Echo”). With these 13 cuts jauntily breezing by in an economical 39 minutes, Ultraviolet Garden feels like a place that Camera Obscura, They Might Be Giants, and Kirsty McColl might have strolled through at some stage. It’s simply wonderful. http://www.cornerlaughers.com/

DREAM DIARY (New York City)
“I first heard Dream Diary this past Fall and loved the two Brighter-esque songs they had up on MySpace at that time. Fast forward to now — those still seem to be the only songs they’ve got in circulation and I still haven’t caught wind of any planned releases. As the previous Brighter name-drop may have suggested, the Brooklyn group play twinklingly classic indiepop from the heart! I feel like they should have had something released on Holiday Records by now — seems like the perfect home for them!” http://www.skatterbrain.org/

LEAVING MORNINGTON CRESCENT (Sweden)
“Elisabeth & Stefan form the duo Leaving Mornington Crescent from Malmö, Sweden. I’m pretty sure that’s them kissing in the photo above. They have a 3″ split cd available on Cloudberry. Their new record is on the Peruvian indie pop label Susy Records. It’s once again a 3″ cdr but this time there are 6 new songs. Buy it now from Susy – it’s a limited edition consisting of 100 numbered copies. From the sound of “Seventeen” the band ventured into new territory. Unlike the sunny 60’s inspired indie pop of “April Song” from the Cloudberry split cd, “Seventeen” is a rather heavy, shoegaze number with buzzing and churning guitars and a solid backbeat. Still the vocals retain the cheeriness of “April Song” with a chorus of “I’m seventeen on the inside, the only difference is…”..” http://www.swedesplease.net/