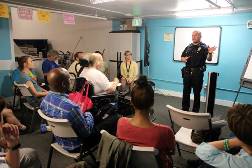 Police Chief Greg Suhr toured San Francisco’s Tenderloin neighborhood last week, after over 1500 residents and workers signed petitions urging him to get a first-hand look at the community’s crime problem. Prior to the tour the Chief met at 48 Turk Street with SRO tenant leaders. The group urged Suhr to increased Tenderloin police staffing, and told him of the perception that police see the Tenderloin as a containment zone for drug dealing. In response, Suhr pledged to increase the number of Tenderloin police and denied that illegal activities are allowed in the Tenderloin that are prohibited elsewhere. Suhr sounded committed to reducing Tenderloin drug dealing, and the new Tenderloin Captain Jason Cherniss has hit the ground running. But Tenderloin residents, merchants and workers have been raising these concerns for three decades, and far too little has changed. Will 2013 be different?

It took a determined effort by Tenderloin activists to get Chief Suhr to hold a listening tour in the Tenderloin, despite his affection for the neighborhood where he walked a beat in the early 1980’s. And while Suhr indicated that he understood the Tenderloin’s drug dealing problem, the packed room at 48 Turk and the voices he heard from on his tour clearly reminded him that there is much work still to be done.

On the evening prior to the Chief’s tour I attended a meeting of Tenderloin small business operators convened by Supervisor Jane Kim. Their accounts of the openly criminal conduct they confront each day sounded exactly like the complaints made at Tenderloin Crime Abatement meetings in 1985.

It’s rather remarkable that for all its wealth and resources, San Francisco cannot stop a single block on lower Turk Street from being taken over by low-level drug dealers. And these dealers control of the block has actually increased over the past decade. So if lower Turk is not a drug dealer containment zone, than the police need to offer a more convincing explanation for the persistence of such activities.

On the morning of the Chief’s tour, Mayor Lee was at the opening of We Works, a hub of entrepreneurship and innovation at the long vacant Golden Gate Theater office building at 25 Taylor. The space has been so dramatically upgraded since my last visit to the space in the 1980’s that it seemed like a different structure.

The We Works hub is less than a block from the drug dealing scene of lower Turk. It is neighbors to the new Center for New Music, and the rest of the west side of Taylor heading to Turk is set for the planned Phantom Coast Gastropub and Brewery. Keith Wilson, one of the brewery owners, attended the Jane Kim meeting as well as the We Works opening, a strong sign of his commitment to improving the Tenderloin.

Wilson, Joy Ou, whose group owns the Warfield Building and 970 Market and who was also present at the We Works event, and the We Work owners are among the investors around lower Turk that have rising expectations for the area. They are creating jobs in an area long starved for economic activity. The city cannot allow these investment pioneers to falter by allowing the first block of lower Turk to bring down surrounding businesses.

Mayor Lee addressed this issue in his talk at the event. The Mayor said that now that Mid-Market is transforming itself in a positive way, “we are now going to start moving on the Tenderloin.” The Mayor rejected charges that the city plans to leave the Tenderloin as a haven for the “down and out,” and said he sees people “excited about living and working” in the area.

The Mayor is correct. Not since the early 1980’s have I seen such high expectations for the Tenderloin’s future. There is excitement in the community, but there is also the daily reality of too many drug dealer hot spots. This is the reality that residents and merchants described to Chief Suhr and Captain Cherniss, and toward which visible progress is needed.

There are many potentially exciting developments in the works for the Tenderloin, but new investors may be scared off by what they see on lower Turk. The solution is not complicated: if Chief Suhr provides the Tenderloin with the short-term officer increase necessary to noticeably improve lower Turk (as he has done in Mid-Market), the arrival of new businesses will change the environments hospitable to drug dealers. Police staffing can then be reduced.

The merchants, property owners, tenants, nonprofit workers, business owners and children of the Tenderloin have the right to a safe neighborhood. All are working with Captain Cherniss to achieve this goal, and those meeting with the Chief at the CCSRO Collaborative office at 48 Turk appreciated his willingness to talk about their concerns.

But words only go so far. Whether Chief Suhr provides the staffing necessary to meaningfully reduce public drug dealing and crime in the Tenderloin is the real test.