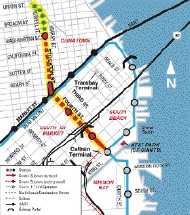 EDITOR’S NOTE: The following is from the Project Manager of the SFMTA’s Central Subway. Other feedback we received on this subject are included after Mr. Funghi’s article.

Thank you for posting Peter Lauterborn’s thoughtful Central Subway guest editorial on November 4. Mr. Lauterborn asked some great questions, and I would like to share additional insights from a project planning perspective.

The project does include a provision to extend the tunnels (for construction purposes only) from Chinatown to North Beach, where the tunnels will daylight and the tunnel boring machines can be extracted in North Beach. An extension of the current Central Subway, or a Phase 3 project, requires a separate planning study and a separate funding request process – Phase 2 and Phase 3 cannot be built at the same time.

Why not opt for shallower & more accessible tunnels? Several construction alternatives were studied and more information on the options can be found in the environmental document. Deep tunneling has great potential for controlling project costs by minimizing surface construction disruption, reducing utility relocations and shortening construction delivery times.

The only visible tunneling activity will occur at the portal construction location (Fourth Street between Bryant and Harrison Streets) and at the TBM extraction site (Columbus Avenue at Union Street). A combination of cut and cover, and mined excavation will be used for the construction of the subway stations. Stations will have elevator, escalator or stairway access.

How is the future Geary Street light rail being optimized? In partnership with SFMTA, the San Francisco County Transportation Authority (SFCTA) is leading the planning phase for transit improvements along Geary Boulevard, including Bus Rapid Transit (BRT), and they completed a feasibility study in 2007. For more information on the project, visit their Web site.

Construction of the Central Subway is scheduled to begin with utilities relocation in early 2010. For more information on project, please visit our Web site and connect with us on Twitter.

Assuming a subway, Mr. Lauterborn is partially correct. Shallow … preferably without mezzanines … would be cheaper and closer to the surface. Plus it would permit longer stations … thereby better preparing the line for future extension. Plus a shallow subway would also allow efficient stops and transfer connections at Market, Union Square, South Chinatown and North Chinatown.

His point about the need for an immediate extension to North Beach or beyond is valid. Everyone agrees. The problem is that there are no funds in sight to do this. It would be cheaper and more practical under the circumstances to operate electric buses as well as LRV’s in the subway. That way the subway would benefit everyone rather than just the people living in South Chinatown.

He notes that there is currently a lack of coordination between the Central Subway project and the future Geary LRV line. He’s right in this as well, but does it really matter? What’s wrong with getting off a Geary LRV and transfering to a Central Subway LRV? Sometimes it’s necessary to transfer from one train to another.

I like the ending “Let’s go!” Since 1985 when I came to the city, I heard of building more tunnels to no avail. This city is far too late in Public Transit, and boy we are paying the price. Any work done to alleviate the suffering of transit riders is most welcome, but how?

SPUR (to start with) is a conservative group that has no interest in seeing an impeccable Public Transit system. One of theirs is Willie Brown whose legacy is anything but Public Transit. I would not trust them or rely on their advice.

Concerning the T-third, it is a half baked success. You have to ride it to your work or to your important appointments to see its deficiencies. The idea of T-third was good, but it is lacking a socio-political fabric. You can’t have a major rail be on equal par with an SUV when it comes to the rule of the road.

You may take a leisurely walk down China Basin, stop at the intersection of King street and 4th and you will get sick watching the supremacy of cars over our Public Transit. It is disheartening to see the trains blocked for so long until all traffic has passed.

Our politicians should summon those who built the T-third and ask them tough questions. Why didn’t they manage to have a small tunnel at that intersection so that our Public Transit doesn’t grind to a halt? The public and some enlightened politicians and think tanks should advance the idea of having traffic lights in favor of our rail. Or to make it simple BUILD TUNNELS.

Today, because have a one tunnel, the 1918 one at West Portal, I lost my job for the day. I waited for 45 minutes for an inbound train. When I got to work I was told that I was late. I was sent home with no pay. Plus I needed the shift for my medical insurance. Here you can have a little idea of the repercussion of a lame Transit System.

Also, it is time that we change our thinking and demand that WASHINGTON funds Public Transit in our major cities, it is a National Security question. We shouldn’t listen to SPUR so that they can line their pockets at our expense. We rather should rally behind Senator Robert Menendez and Representative John Lewis who are trying to stop greedy Banks from extorting 2 billion dollars from our cash deprived Transit System, that money could go a long way in building an infrastructure that will make American cities like an average European and Asian city in Public Transit.

Yes, let’s go. The time is fleeting, and oil is drying.

Why would we waste money on Geary light rail, when a BRT system will do the job with more flexibility at a fraction of the cost? The same could be said about the Central Subway: Why spend the billions that it will take to build it when a surface BRT in a designated lane running up Kearny would be a cheap, safe alternative?

As a transportation planner, I can’t see anything good about the Central Subway except it makes our “subway” system appear more comprehensive, and the fact that there’s no space to build a station on Stockton Street in Chinatown seems like it would give the boosters pause.

I don’t see why a separate station around Union Square for a hypothetical Geary light rail is so horrible. In most subway systems, different lines use different tunnels and rarely share like we do along Market Street. Furthermore, a deep Central Subway tunnel in that area allows for the possibility of a future Geary subway passing over the Central Subway, possibly extending into the Financial District or meeting the Market Street subway at Montgomery.