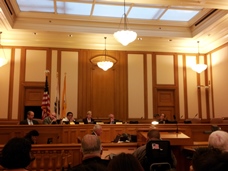 SFMTA approved its two-year budget on April 15, but it failed to address concerns raised on the agency’s enactment of their Vision Zero goals. The budget retains the same funding proposed two weeks ago for WalkFirst and bicycle safety, nowhere near what Vision Zero requires.

The need for the free Muni program to include seniors and funding Vision Zero was made clear in public comment two weeks ago, and is an important part of realizing the goals of Vision Zero. But the MTA has yet to hold to its commitments, and it is unclear if the budget passed will address these concerns.

“We laid out everything we could find in terms of funding,” SFMTA Director Ed Reiskin said. “This budget represents our best effort at trying to fund those [programs].”

“We recognize for any of these modes, including transit, it doesn’t provide the full funding we need,” Reiskin continued. “Even with these measures… it’s a huge leap forward for transit and for streets and for bike and pedestrian safety.”

The MTA continues to support initiatives for Vision Zero, and it announced plans to implement 24 projects to increase pedestrian safety over the next two years last Friday.

Despite these initial rollouts, Schneider questioned MTA’s commitment after relaying concerns for Vision Zero’s support two weeks ago. She asked the MTA Board about the concerns raised over plans if November’s ballot measures didn’t pass, and how WalkFirst would be implemented.

“I looked at the budget, and it looks exactly the same as it did two weeks ago.” Schneider continued. “And I’m wondering why this hasn’t been addressed.”

The Board did not spend any time after public comment to discuss Vision Zero.

But with minimal funding for Vision Zero initiatives, and without including seniors and people with disabilities into the free Muni program, MTA’s commitment to pedestrian and bicyclist safety remains questionable.

“Half of the people killed in our city’s streets are seniors. It ties into free Muni for seniors and people with disabilities,” Schneider said.