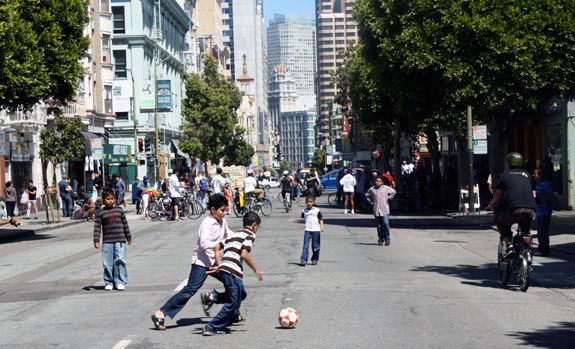 In 2007, the San Francisco Board of Supervisors unanimously adopted the Tenderloin-Little Saigon Neighborhood Transportation Plan. Yet today, 10 years later, the Plan’s key pedestrian safety feature—the shift of Eddy and Ellis Streets from one-way to two-way streets—has not been implemented.

I wrote in 2013 how San Francisco’s transit funders “starve” the Tenderloin. But this delay is not about money. Mayor Lee got us the money we needed to implement two-way streets.

No, the problem is SFMTA’s coming up with increasingly questionable  excuses for delaying implementation. After starting the conversion to two way streets in April 2012, the process abruptly stopped. Mayor Lee then got the funding to restart it, which led to the normal SFMTA implementation delays.

But then SFMTA came up with a new excuse: they said we had to obtain “community consensus” supporting two way streets before the project could proceed.

I learned in researching my book, The Tenderloin: Sex, Crime and Resistance in the Heart of San Francisco, that in the 1950’s the Tenderloin’s longtime two-way streets were changed to one way without even a public hearing. Union Square and downtown interests wanted to get cars faster to their shopping, so endangering Tenderloin pedestrians and hurting the neighborhood’s small businesses was fast-tracked.

In contrast, when it comes to protecting the thousands of Tenderloin kids and seniors, well, for the SFMTA it’s “community consensus” time.

Community consensus? It already happened. The SFCTA funded a two year community outreach program  in 2005that proceeded the Board of Supervisor’s adoption of the Plan in 2007—it was community consensus that led to the decision to return to two streets.

And community support remains strong. After half the blocks on Eddy and Ellis were converted to two-way in 2012, the Central City SRO Collaborative surveyed residents to see if they felt it was calming traffic. 55% said the two way streets increased pedestrian safety, and 21% noticed no difference (21% had no opinion).

But SFMTA wanted the impossible. They decided it was not enough to have  strong community support for two-way streets demonstrated over a more than seven year period.  Instead, SFMTA insisted we had to have “community consensus,” which in their view means community unanimity. Every single group, business and organization must agree to two-way streets before the project can proceed.

The SFMTA would never try this game in a homeowner community. But they think–wrongly—they can pull this “community unanimity” stunt in the Tenderloin.

It’s understandable that the SFMTA is coming across people either unaware or not supportive of the project, as many Tenderloin residents and workers were not here from 2005-2007 when the community outreach occurred. Some were now learning about the decade old plan for the first time, and wondered about the process.

This would not have been an issue had two way streets been implemented several years ago, but SFMTA failed to do that.

Community unanimity is virtually impossible to reach in any neighborhood. I’ve never heard of a pedestrian safety project where SFMTA imposed this unrealistic  standard and assume it was specially created for the Tenderloin.

Following the intervention of Supervisor Jane Kim’s office, SFMTA has partially backed off the “community consensus” requirement (though Ellis Street is not going forward due to hotel owner opposition, so it will only be fully two way on Eddy Street).

But having been forced to drop one obstacle, the SFMTA has now injected a new one: it claims to need federal approval to move forward since federal funds are involved.

That’s the first time I heard that issue in the decade we’ve been dealing with the issue.  And you can imagine what’s involved getting the Trump Administration to approve a traffic-calming project in San Francisco. SFMTA’s request could sit in a stack of papers for years.

If SFMTA knew it needed federal approval, it had eight years to get it under Obama. Now it can use the “we need federal approval” excuse to delay any project of its choosing, and two way streets in the Tenderloin seems to top this list.

Mayor Lee and D6 Supervisor Kim strongly back two-way streets. So do the vast majority of people living or working in the Tenderloin.

The Tenderloin has far too many pedestrians hit by speeding cars. Our 3000-4000 kids deserve slower cars and safer streets. Our small businesses deserve slower traffic flows that encourage customers to stop.

If Vision Zero is to have any meaning in San Francisco, the Tenderloin’s long overdue traffic calming needs must be addressed.

After a decade, our faith in the SFMTA implementing the Tenderloin-Little Saigon Transportation Plan has been lost. SFMTA does not see Tenderloin traffic calming as a priority, and acts accordingly.

No agency who cares about pedestrian safety needs ten years to create a two way street.