SFMTA Brings Humane, Two-Way Traffic Back to Ellis and Eddy 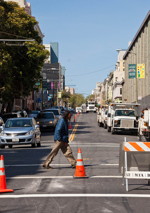 The SFMTA began converting several blocks of Ellis and Eddy to two-way streets in the Tenderloin two weeks ago. The conversion is expected to calm motor traffic on the former multi-lane, one-way arterial streets designed to rush car traffic through one of the city’s densest neighborhoods.

“Converting one-way streets to two-way is a proven way to slow traffic, and help neighborhood businesses thrive,” said Livable City Director Tom Radulovich. “It is also good to see San Francisco finally prioritizing the safety and livability of this mostly car-free neighborhood, where four out of five households are non-car-owning.”

The Tenderloin, with its high volume of pedestrians, has seen some of the highest rates of pedestrian injuries in the city since nearly all of its streets were redesigned as freeway-like, one-way traffic funnels decades ago. The change should make the streets safer and more inviting for people walking, bicycling, and shopping.

“San Francisco has a nasty habit of imposing the greatest traffic impacts onto dense neighborhoods that contribute the least to generating auto traffic,” Radulovich added.

Two-waying streets was recommended in the Tenderloin/Little Saigon Community Study adopted by the SF County Transportation Authority in 2007. The projects in the plan have seen repeated delays since its adoption, for reasons that remain unclear, but the SFMTA made progress last August, implementing the first of the conversions on McAllister Street. The study also calls for two-waying Leavenworth and Jones Streets.

The SFMTA converted two blocks of Eddy (Larkin to Leavenworth) and plans to convert four blocks of Ellis (Polk to Jones) by mid-May, said SFMTA spokesperson Paul Rose. Although the study recommended two-waying all of the one-way blocks on Ellis (from Cyril Magnin to Gough Streets) and Eddy (from Cyril Magnin to Larkin Streets), only the initial six have been approved by the agency’s Board of Directors.

Two-waying Eddy also opens the way for the 31-Balboa to run in both directions on the street, eliminating the westbound detour onto Turk Street — similar to the 5-Fulton’s re-route onto McAllister last year. Service on the 31 could be sped up by removing the unnecessary turns, and the route would be simpler for riders to follow. Two-waying Leavenworth and Jones could allow for a similar simplification of the 27-Folsom route.

Radulovich noted that a two-way Eddy also presents an “exciting possibility” for an east-west bikeway on the street, as it is “a relatively level route from Broderick to Market, and could link up with the 5th Street bike lanes if we close the bike network gap on 5th between Market and Mission,” though he said the idea hasn’t been “officially” considered yet.

This piece was first published on February 24th at Streetsblog.