SFIFF 54 — Interview With “On Tour”’s Kitten On the Keys 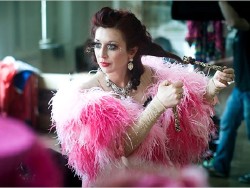 Suzanne Ramsey, better known as neo-burlesque performer Kitten on the Keys, has an incredible resume ranging from opening for the seminal punk rock group The Damned to achieving sainthood as Saint Tickle Me Ivories via The Sisters of Perpetual Indulgence. Now this multi-talented San Francisco resident can add film actress to her list of accomplishments. She plays a member of an American neo-burlesque troupe touring French port towns in the S.F. International Film Festival Closing Night Film, Mathieu Amalric’s Cannes award-winner “On Tour.” Beyond Chron interviewed Kitten by e-mail.

Beyond Chron (BC): What made you decide to adopt the Zez Confrey piece as your stage name?

Kitten on The Keys (KOTK): I worked for years in a Vintage Clothing store on Divisadero Street where we played vintage music to fit the ambience. The [song’s] fun gait and pep fit the way my addled brain views the world: teeny tiny kitty paws running along my grey matter. I ended up officially adopting the name after I had acquired a Victrola 78 of “Kitten on the Keys,” and the original 1920’s sheet music.

BC: 19th century burlesque often poked fun at social mores of the time by using sexual suggestion and non-traditional women’s roles. In what ways does neo-burlesque continue or differ from that tradition?

KOTK: Neo-burlesque celebrates women and the beauty of all genders, shapes and sizes performing a sexy or silly strip tease act. What gal does not want to dress in glamorous sparkly skimpy outfits and strut her stuff in front of an enthusiastic audience? With Roky Roulette, we have him taking the traditional roles of Men (e.g. The Ass-tronaut) and blowing them up into kooky cartoon characters with a hot twist of testosterone.

BC: What proportion of neo-burlesque performers is male? Do they generally specialize in particular types of acts?

KOTK: Neo-burlesque performers are usually women. However, the movement includes a few men and transgendered folks. Some men play on the feminine, some create their own icons. The Stage Door Johnnies from Chicago is an all male professional dance troupe who knows how to stuff a G String.

BC: What was it about Colette’s music hall experiences that Amalric felt your troupe embodied?

KOTK: Sadly, I do not read French and the music hall stories Colette wrote are not available in English. Colette inspired and hung out with many artists. The performers in Cabaret New Burlesque are continuing this tradition. We are glittery exhibitionists.

BC: How do you feel the decidedly non-skinny neo-burlesque performers of “On Tour” challenge what’s considered sexually attractive?

KOTK: The US has such an unhealthy and narrow minded view of what is considered pretty and sexy. I strongly feel the reason why our show in France, Cabaret New Burlesque, is so popular is because we come in all shapes, sizes and talents — there is something for everyone.

I came up with the troupe’s fictional name in the film Une Fille Dans Chaque Port (A Girl in Every Port) since we were doing port towns on the edge of France. We are so secure of our bodies and audiences are so enthusiastic about our curves! 14 is the average size of an American woman — audiences LOVE seeing the familiar glamorized.

BC: “On Tour”‘s script was the result of collaboration between your real-life troupe and director Mathieu Amalric. How did that process work?

KOTK: We were never given the elusive secretive script. If anyone in the cast caught wind of it, the crew would just be quiet about the story and respect Mathieu’s wishes. We were given day sheets with who needed to be on set and the call time and the name of a scene — and that was it.

Some people made up their characters on the spot. Evie [Lovelle]’s role was very specific – the shy new girl who won’t take it off.

Being fresh was incredibly important. It was a stressful process, but when I finally saw the film for the first time at Cannes I realized what was up.

[Amalric] would try a scene and we would improvise a lot – it was interesting to see what he kept. Mimi [Le Meaux] would be given dialogue in French the day of a shoot and would be expected to memorize it. The pressure and stress helped mold some of our characters.

We played a constant guessing game, but we trusted Mathieu’s intellect and reputation. He’s a very generous man.

BC: Which of the events depicted in the film resulted from real-life encounters?

KOTK: If you look closely at the credits, people do not seem to be who they really are. The airline hostess was really our Cesar nominated costumer Alexia Crisp-Jones. The wife stricken with breast cancer is a journalist from Elle. The assistant Ulysses Klotz is the son of a famous French film director and writes many scores for film.

Many inside French film world jokes are to be found. It’s pretty cool and obviously calculated.

KOTK: I love to travel and perform. I cannot believe how many places I have been! I do feel terribly free – but around the second week my heart aches for my geriatric punk rock boyfriend and kitty cat. Thank goodness for Skype!

I think keeping busy by looking at new sights, sounds, and smells helps with my homesickness. I always try to bring new material to work on during the down time. The Cabaret New Burlesque troupe is like one big dysfunctional family and I somehow find comfort in that … used to chaos, I suppose. Maybe I should start writing down my memories of all these fabulous experiences!