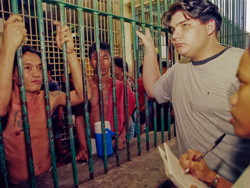 The Chiong Seven case forcefully continues to demonstrate how the scales of the Philippines’ criminal justice system remain unbalanced by the heavy thumbs of criminal influence and political connections. Michael Collins’ powerful documentary “Give Up Tomorrow” recounts the sorry history of this case.

In 1997, the two 20-ish Chiong sisters disappeared from the Philippines province of Cebu. The highly publicized disappearances sparked a massive search that eventually yielded a disfigured and gang-raped female body. Supposedly, this corpse belonged to one of the missing sisters. Public pressure to close the case led police to arrest seven men the media would dub “The Chiong Seven.”

Yet the guilt of alleged ringleader Paco Larrinaga seemed based largely on his family ties to an opposition presidential aspirant. Stronger evidence such as Paco being 350 miles away in Manila when the disappearances occurred would normally support his innocence rather than his guilt. But the combined burdens of media coverage already assuming the seven men’s culpability and a criminal justice system openly using the flimsiest evidentiary straws possible led to Larrinaga and his six co-defendants being imprisoned and even facing execution by lethal injection.

Watching Collins’ chronicle of the Chiong Seven’s case is a grueling ordeal, but not for lack of quality. “Give Up Tomorrow” is an engaging true life film noir from the first frame to the last.

Collins effectively evokes a continual sense of helpless rage in the viewer. For example, Judge Ocampo gives the prosecution’s sole compromised witness excessive courtesies while also actively sabotaging the defense’s efforts to present exculpatory evidence. But unlike the Philippine media which had already found the Chiong Seven guilty, the filmmaker presents his case for Larrinaga’s innocence (and by implication his co-defendants too) without exaggeration.

One particularly infuriating element is the far from innocent behavior of the Chiong parents. The girls’ disappearance occurred just before Mr. Chiong would testify against the powerful drug lord he worked for. Allegedly grieving mother Thelma Chiong’s actions, including dangling career promotions in exchange for the Chiong Seven’s convictions, are less Victim and more Politically Connected Manipulator.

Given the heinousness of Larrinaga’s legal ordeal, it’s amazing that his spirit manages to remain uncrushed. But Paco’s certainty in his innocence and the titular mantra he recites inspires viewers with his emotional strength.

Joey (Wang) and Cody (Trevor St. John) happily live in Tennessee with their precocious son Chip (Sebastian Brodzich). But this idyllic life disintegrates after Cody dies from injuries received in a traffic accident. Joey slowly finds he has no legal recourse to keep anything from his life with Cody, particularly custody of Chip.

Like Cody, Wang’s film finds the good qualities in many of its characters. Cody’s sister Eileen particularly doesn’t come across as cruel but as someone overwhelmed by her brother’s sudden death. Chip comes across as lovably endearing instead of irritating or saccharine.

“In The Family” will admittedly anger militant viewers who prefer challenging laws producing homophobic results over resigned acceptance. Joey certainly has good reasons to challenge such laws. But such quixotic legal actions contradict his pragmatic nature. Wang’s film eventually finds its answers less in the law than in working through the heart’s confusions.

Harvard senior Emily “Etay” Tay is a first-generation Burmese-American who plays a point guard on Harvard’s women’s basketball team. Etay’s dream of playing professional basketball clashes with her traditional mother’s dream of Emily’s living a more domesticated life. An equally pressing problem is that Etay hasn’t come out as a lesbian to her parents.

Johnson’s endearing film candidly follows Emily’s struggles to both pursue her dreams and find a place where she can fit in. It doesn’t sugarcoat her shortcomings, such as mentally withdrawing when games go bad or partying a bit too hearty at the wrong time. But any disapproval of such faults as her nonchalantly using her superior basketball skills to hustle schoolmates’ lunch money is overcome by seeing her more vulnerable moments.

Johnson succeeds in making the viewer want to scream “Yay, Etay!” when the end credits roll.