SF Turning Tenderloin into a Ghetto 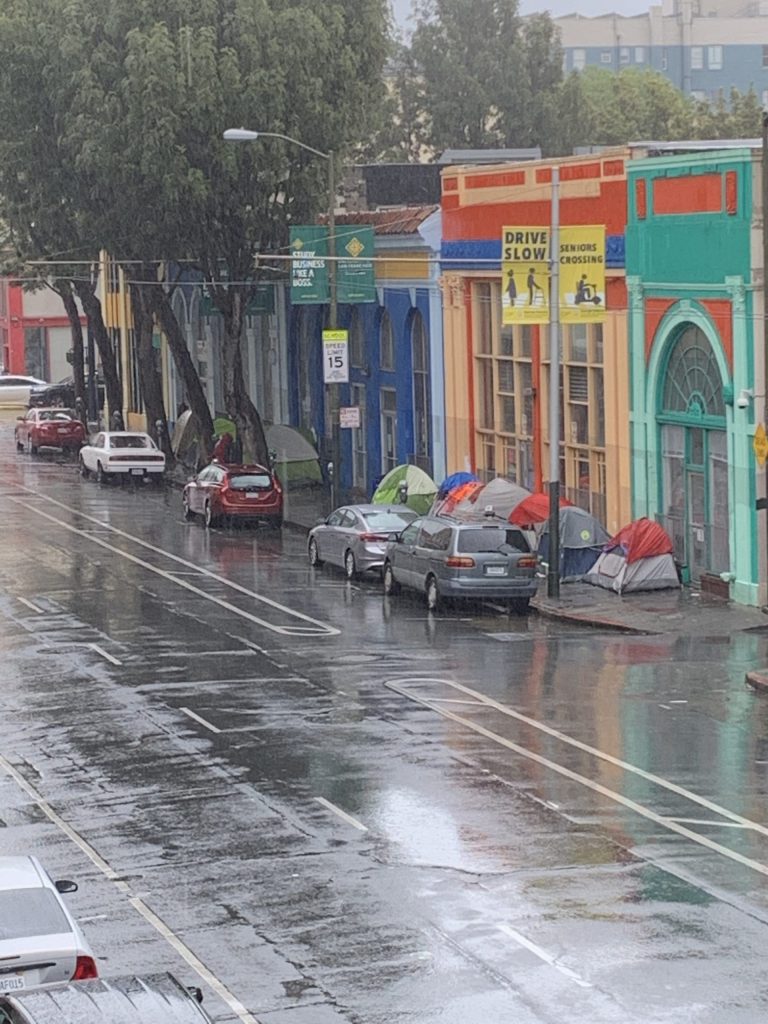 The Tenderloin Becoming a Horror Show

Imagine walking down 24th Street in San Francisco’s Noe Valley and seeing a row of tents. The tents are far less than 6-feet apart and barely leave room for pedestrians. What would happen? A flood of 311 calls would follow and city officials would promptly remove the tents on health grounds.

Or check out Castro Street on this live cam. The sidewalks were completely clear whenever I checked yesterday; and Castro Street, unlike 24th St., has had past issues with sidewalk congestion.

What we see in the Castro, Noe Valley, the Marina and elsewhere is how San Francisco protects its gentrified neighborhoods. But it treats the low-income Tenderloin very differently.

The Tenderloin has become a horror show. Feces, drug dealers and users, graffiti, tents and crowds on  sidewalks dominate the landscape. All is being documented by tenants taking videos.Nobody calls 311 over sidewalk obstruction because they know the city won’t act.

The Tenderloin looks this way because that’s how the city allows it. The Tenderloin Police Station acknowledged this in a conference call with D6 Supervisor Matt Haney last Friday. They are under orders are not to disturb tents regardless of the health risks to tent dwellers or pedestrians.

City Hall is using the pandemic to further transform the Tenderloin into a ghetto. An official containment zone for illegal activities.

In 1966, three activists at Glide published “The Tenderloin Ghetto: The Young Reject in our Society.” I explain the report’s significance in my book, The Tenderloin: Sex, Crime and Resistance in the Heart of San Francisco. The report describes a Tenderloin subculture of “rather desperate conditions.” Its focus was on how gay youth’s presence in the Tenderloin exacerbated their sense of societal rejection.

When I came to the Tenderloin in 1980 many residents shared this feeling of rejection. They saw themselves as failures for “ending up in the Tenderloin.” But over time this changed.

Tenderloin residents developed enormous pride in living in a National Historic District. And in a neighborhood that launched the city’s LGBTQ movement, and which successfully preserved its longterm affordability and ethnic diversity.

The community fought to  ensure people understood the Tenderloin as a thriving neighborhood, not a containment zone. A huge amount of investment came into the Tenderloin during Ed Lee’s mayoralty, and the neighborhood was making major progress. Yet the Tenderloin was moving in the wrong direction even before the pandemic. I wrote about this for the SF Chronicle on February 23  when I described the community’s recent progress as being “at risk.”

That turned out to be an understatement.

Whereas San Francisco once sent a message of rejection to the Tenderloin’s gay youth, it now tells the neighborhood’s 3000 children that their health and safety, and that of their parents, does not matter.  It tells them that their survival depends on never leaving their homes for any purpose, as even walking outside their apartments puts them within six-feet of someone who may have the virus.

Tenderloin children hear Mayor Breed’s daily warnings about the importance of maintaining social distancing. And  they wonder why it doesn’t apply to their neighborhood.

The message to Tenderloin kids today resembles that given to gay youth in 1966: the city doesn’t care about them.

Over 20,000 people live in the Tenderloin.  Some residents have given their companion animals to friends as they do not feel it safe to walk a dog on crowded Tenderloin sidewalks. This could not have been an easy decision.

Many “essential” workers provide services in the neighborhood. Reaching their jobs require walking on  sidewalks that city officials refuse to clear. They are being asked to endanger their lives so that the city can ignore social distancing requirements. Nonprofit employees are using paid sick leave for fear that walking these sidewalks will subject them to the coronavirus.

Mayor Breed showed outstanding national leadership in her early battling of the coronavirus. Even longtime Breed critics like D5 Supervisor Dean Preston concede the mayor’s “bold prevention efforts through the early Shelter In Place Order.” Preston and other “progressives” have primarily criticized Breed for what he describes as a “complete unwillingness to do anything meaningful to prevent the spread of COVID-19 among homeless people.”

The Tenderloin is comprised of only a small segment of homeless people. The neighborhood is overwhelmingly made up of low-income and working class residents, seniors, disabled persons, and families with children. Other than D6 Supervisor Matt Haney,  the progressive community has largely ignored the mistreatment of these residents.

Many new restaurants and buildings were scheduled to open in the Tenderloin in 2020. But seeing feces, open drug use, drug dealing, graffitti and utter lawlessness now dominate the Tenderloin landscape, small business owners have to be wondering whether they really have a viable future in the neighborhood.

There were 40-50 drug dealers and users crowding in front of 101 Hyde on Friday and nobody from the city interfered. Pedestrians had no sidewalk left. But in a ghetto, the city ignores the rules it applies elsewhere.

Many of us have worked too long and too hard to allow City Hall to rollback all the Tenderloin’s gains. That’s why I keep writing about this injustice. It’s why we have plans to turn back City Hall’s plans for the neighborhood.

But people outside the Tenderloin who care about social justice need to join our demands that the neighborhood be treated equally to others. What message does it send that a neighborhood that triumphed over gentrification gets punished by City Hall for doing so?

It’s not one that San Francisco should be endorsing.