SF’s Secret Plan for the Tenderloin 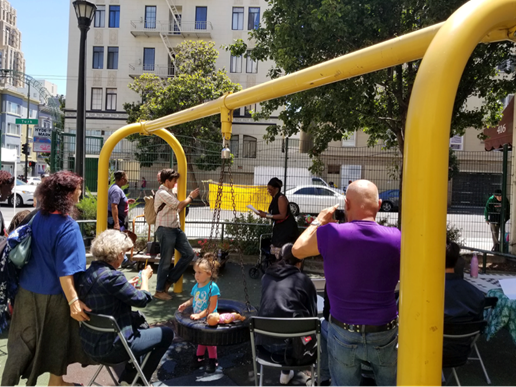 The new proposals are as ill-conceived as those of 2017. The Tenderloin is a children-filled residential neighborhood that already accepts far more than its share of services for the unhoused. Once word gets out about the city’s plan I expect the same massive resistance as we saw two years ago.

I cannot believe that after the public debate about spreading services throughout the city that San Francisco is again talking about adding services to a neighborhood already at the breaking point.If you haven’t noticed, the Tenderloin is not doing well. I’ve worked in the Tenderloin for nearly forty years and have never seen so much open drug activity.

Or so few beat cops. The two facts are connected.

The new  DayBreak Centers would be places for the unhoused  to hang out, do laundry, get connected to services and get counseling. They sound perfect for placement in Districts 1, 2, 3, 4, 5, 7, 8, 11 and the Bernal Heights portion of D9.

None of those districts do their fair share to deal with the unhoused. All benefit from city policies exporting their unhoused people to the Tenderloin.

One proposed Tenderloin site is a long rundown parking lot at Turk and Hyde. It has been a neighborhood blight for over two decades (I have a letter I wrote in 1998 complaining to the owner, SEIU Local 87, about the lot). The lot is surrounded by illegal drug activities and regularly contains a level of trash that would subject owners who were not politically-connected to city fines and likely city attorney prosecution for public nuisance.

Opening a DayBreak Center on the lot would only add to the problems currently faced by the Tenderloin. And once the facility closed at night where would the people go? Pacific or Bernal Heights? The Richmond or Sunset? Potrero Hill? I don’t think so. They would stay near the lot in the Tenderloin.

Incredibly, the city’s proposed facility is directly across the street from a city playground for young kids (see photo above). SF Recreation and Park Department is currently spending more than $1million to upgrade the Hyde-Turk Mini-Park and a beautiful mural nears completion above.

I recall Board of Supervisors President Norman Yee saying that proposed homeless services in his district were inappropriate because they would be near children. Does “progressive” San Francisco really believe putting homeless services adjacent to low-income toddlers is fine so long as we keep the unhoused miles away from affluent kids?

We don’t think of San Francisco as a city that would open a facility designed to attract people with mental and substance abuse problems across the street from a mini-park for toddlers.

We think of San Francisco as a city that promotes racial equity. Yet it wants to further over-saturate with homeless services its most racially and ethnically diverse neighborhood.

I recently heard about a land owner who offered a large plot of land on San Bruno Avenue for the city to use as a Navigation Center. City officials felt the site would arouse too much neighborhood opposition in Potrero Hill and turned down the offer.

Here’s how San Francisco officials look for sites for homeless services. If they see a site in North Beach, Bernal Heights or the Westside, they find a reason why it won’t work. In the Tenderloin, any existing use is seen as convertible to homeless services.

Talk about spreading Navigation Centers and homeless services throughout the city has been just that: all talk. Supervisors in much of the city fear alienating voters. Matt Haney risked nothing politically by backing the Embarcardero Navigation Center as those opposed were not his voting base. But most other supervisors rely on homeowner support and fear losing it by bringing in homeless services.

If supervisors are eager to host such services in their district, what are we waiting for? How come it hasn’t happened? Why is virtually the entire city’s response to the homeless crisis still concentrated in D6, D10 and the non-Bernal Heights portion of D9?

“The Facility Should Go Where the People Are”

Backers of siting more homeless facilities in the Tenderloin argue that the people they are trying to serve are already there.

But why they are there? Why were young people ousted from doing drugs in Golden Gate Park given free room to operate in the Tenderloin rather than Bernal Heights, Hayes Valley or the Marina District? Why were dealers and users adjacent to Bill Graham Auditorium on Larkin and in UN Plaza also given a one-way ticket to the Tenderloin?

The past year has seen a huge increase of newcomers to the Tenderloin bringing tents. These unhoused residents were forced out of other neighborhoods and told, directly or implicitly, that they would have a safe spot in the Tenderloin. I wrote about the huge influx of Tenderloin tents on sidewalks in July.

Many drug users and dealers would likely prefer spending days in more affluent neighborhoods. But the police and city officials ban them from such areas. Instead, they consolidate drug dealing in particular in the Tenderloin, Mid-Market, SOMA and small pockets of other neighborhoods.

My Tenderloin mentor, the late Leroy Looper, always fought to stop the Tenderloin from being a containment zone for illegal activities. He scoffed at claims the police were helpless to stop people from dealing on Tenderloin sidewalks. He used to say we should rent a van, bring people hanging out on Tenderloin streets to Union Street, and see how long they would last there.

He estimated five minutes. Looper knew the streets better than anyone.

Mayor Lee vowed to make sure the Tenderloin never again became a containment zone. A lot of people opened restaurants, started businesses and are building housing in the neighborhood in reliance on the city’s commitment.

Mayor Breed also wants the Tenderloin to be safer. But just as Mayor Lee was unable to get the police resources the Tenderloin needed in the months before his death in December 2017, Breed’s talk about increasing the number of beat cops and outreach services is not seen on Tenderloin sidewalks.

District elections allow supervisors to view the Tenderloin as “not their problem.” But it’s not just Matt Haney’s concern.

Progressives should be lining up to condemn “progressive” San Francisco’s long mistreatment of the only central city neighborhood in the United States that has avoided gentrification. San Francisco forces those in its most economically and racially diverse neighborhood to confront daily harassment and drug activities on their sidewalks— it is truly shameful.

Randy Shaw is Director of the Tenderloin Housing Clinic and author of The Tenderloin: Sex, Crime and Resistance in the Heart of San Francisco.