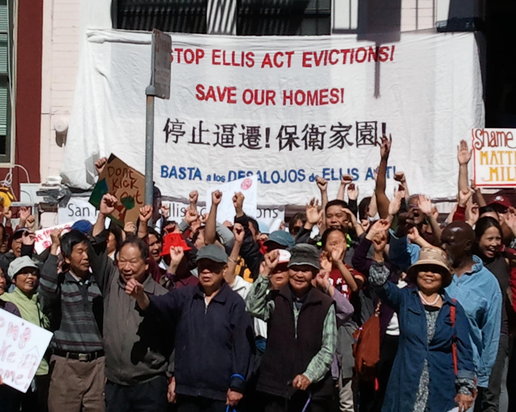 This may sound like the ultimate man bites dog story amidst skyrocketing San Francisco rents on vacant apartments, but 2014 saw a sharp reduction in speculator evictions under the Ellis Act.  Yet some constant critics of City Hall have trouble accepting this good news.

Among this group is the SF Chronicle, whose December 28 story on the city’s 2014 response to the housing crisis claimed “One thing most of us can probably agree on: City Hall politicians were grasping for answers to these quandaries all year and not coming up with many concrete solutions.”

Instead of citing the specific actions activists pushed City Hall to take to reduce Ellis evictions, the article quotes a tenant saying that “San Francisco needs to wake up and see this (eviction) epidemic is real and spreading. Our own local government is not really facing the problem either.” The article also quotes Supervisor David Campos saying there has been a “mixed response” from City Hall, and that “People are talking about doing something, but nothing significant has really changed.”

Well, the Ellis eviction numbers say a lot has changed. And credit goes to Mayor Lee, a majority of the Board of Supervisors who backed tenant protection measures, and most of all to the activists whose ongoing protests have created a political and social climate that finds speculative evictions of longterm tenants morally unacceptable.

From July through October 2014 (the most recent month where statistics are available), only four Ellis notices total were filed with the Rent Board. That’s compared to 46 notices filed in December 2013 alone.

Why the steep decline? Because, although forgotten by some in the media, City Hall took three concrete actions that reduced Ellis evictions.

First, Mayor Lee tripled funding for Ellis Act eviction defense. This sharply raised the litigation costs for Ellis speculators, cutting into the potential profits of Ellis evictions. Increased eviction defense also stopped some high-profile evictions, sending a message to both tenants and landlords that Ellis evictions are not the walkover they may have thought.

Third, four supervisors (working at City Hall) put Prop G, the anti-speculator tax on the November ballot. As occurred with the state Ellis bill, the pendency of the measure deterred speculators from boosting its chances by moving forward on new evictions. While Prop G failed, it was a concrete action that reduced Ellis evictions.

The Board of Supervisors and Mayor also helped deter Ellis evictions by passing legislation steeply raising Ellis relocation payments. And reflecting the recognition that non-fault evictions affect tenants beyond the Ellis Act, the city also allocated an additional $1million for legal defense in non-Ellis eviction cases.

Thanks to San Francisco elected officials and tenant activists, Ellis evictions sharply declined in 2014. This was a significant step forward in the effort to stop speculator displacement. Overall, more was done in 2014 to reduce Ellis evictions than in any single year since this form of speculator eviction became a major problem in the late 1990’s.

First, his “Small Sites” Acquisition program will fund nonprofit purchase of properties where tenants face Ellis evictions. Benito Santiago’s tenancy at 151 Duboce has already been saved under this program.

Second, the mayor is assembling a political coalition to pass Ellis Act reform in Sacramento in 2015. This creates uncertainty in the speculator eviction market, with potential evictors concerned that they will buy properties only to be unable to convert them to tenancies in common. This reduces Ellis evictions

To be sure, there is no local substitute for reforming the Ellis Act. Such evictions will continue until state law is changed. The shortcoming with strictly local solutions is that nearly every law that City Hall has passed to stop Ellis evictions since 1998—-when Mayor Brown signed a bill that required the conversion of rental units to win Planning Commission approval—has been invalidated by pro-speculator judges.

Even the Campos relocation law, which was clearly facially valid and subject only to potential “as applied” challenges—meaning that it may have proved an unconstitutional “taking” in specific cases—was thrown out by the courts. Judge Breyer’s logic in that case—that landlords are not responsible for high housing costs—would also have resulted in the striking down of rent control laws if prior courts had followed such reasoning.

Judicial barriers to local limits on Ellis evictions make San Francisco’s 2014 reduction even more impressive. But instead of praising City Hall and tenant activists for implementing multiple strategies to reduce the impacts of a terrible state law, some in the media prefer to falsely claim that solutions are lacking and nothing of importance is being done.

Whereas the former, factually accurate narrative spurs hope and touts the value of increased tenant activism, the false, latter account engenders despair. Tenant protests are having their intended impact, and their success should encourage greater participation in 2015.