SF Redistricting: Why the Tenderloin Must Join District 3 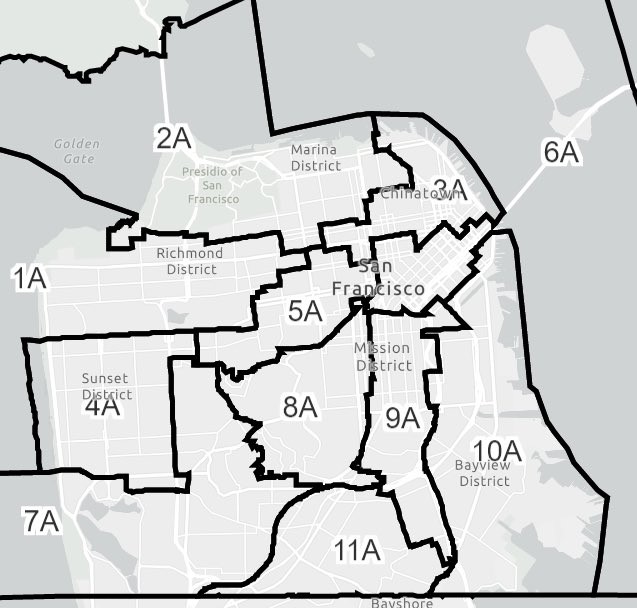 The Tenderloin and Chinatown have long prioritized preserving SRO hotels, stopping tenant displacement and pushing for family housing in their neighborhoods. Now the April redistricting enables these neighborhoods to unite in the same supervisor district.

Moving the Tenderloin into District 3 solves the requirement that roughly 30,000 D6 residents move to District 3. This reflects D6’s new housing since the 2010 census. The Tenderloin’s population is roughly 25,000. It’s a perfect shift that combines two city neighborhoods with common concerns into one district.

Addressing the D6/D3 population imbalance can be done in two main ways.

Chinatown and the Tenderloin have the most SRO hotels. Most of SOMA’s SRO’s were destroyed by the Redevelopment Agency; its remaining SRO’s are largely limited to the first two blocks of Sixth Street.

SRO hotels are a major part of Tenderloin and Chinatown. They are a tiny fraction of SOMA.

The Tenderloin and Chinatown have long been gateways to immigrant families coming to the city. The  only San Francisco neighborhood with greater density than the Tenderloin is Chinatown.

The Tenderloin and Chinatown also share food insecurity issues among residents. The impact of this has been magnified since the pandemic began.

Both neighborhoods are also primarily filled with monolingual immigrant-owned mom and pop businesses. Large corporate businesses outside hotels are nonexistent in the Tenderloin and rare in Chinatown.

Finally, the Tenderloin and Lower Polk Community Benefit Districts (CBD’s) often work in partnership. This brought particular success at Macaulay Park, which is located in the Tenderloin but is in the LPCBD area.

Uniting the Tenderloin’s heavily SRO and Asian-American population with Chinatown in D3 is the best alternative. The San Francisco Redistricting Task Force, the body that decides the new district lines, should back this approach.

Dividing the Tenderloin is a strange way to define “unity.” But progressive interests also split the Tenderloin into two districts under the original 1970’s district lines. One side of  Leavenworth was placed in D4 and the other in D10.

When district elections returned in 2000 the Tenderloin was unified in D6. Now there is pressure to repeat the 1970’s mistake of dividing the Tenderloin as it if were not a distinct neighborhood.

Under the redistricting proposal that divides the Tenderloin, parts of SOMA along Rincon would join District 3. Those residents live far away from the North Beach, Chinatown, Lower Nob Hill and Telegraph Hill neighborhoods that make up D3. Shifting newly built neighborhoods into a largely historic D3 is a misguided approach; yet that is what opponents of moving the Tenderloin into D3 are proposing.

The alternative to moving the Tenderloin into D3 not only divides the Tenderloin. It also wrongly splits  SOMA into three districts. Under the initial draft plan, Mission Bay and South Beach would go to D10 and part of Rincon Hill to D3. The rest of SOMA stays in D6.

The South Beach | Rincon | Mission Bay Neighborhood Association sent a letter to the redistricting task force opposing the proposed break-up of their neighborhoods. It states, “The South of Market neighborhoods including The East Cut (Rincon, TransBay), South Beach, Yerba Buena, Eastern and Western SoMa, along with Mission Bay and Treasure Island (and Mission Rock and Central SoMa as they are developed) all share common and essential needs and should be viewed together as a Community of Interest unit…we hope you see the clear synergies and needs for the joint advocacy that we have pursued for more than a decade … and need to continue going forward as a clearly defined community of interest… Please keep the District 6 area south of Market and including Mission Bay and Treasure Island intact. ”

San Francisco is a city of neighborhoods. Redistricting should not divide them.

There’s been a lot of controversy about the initial plan released by theTask Force last week. Let’s view that as a rough draft designed for feedback. My feedback is that redistricting should not become a weapon against SOMA neighborhood power. Instead it should unify and empower communities with common concerns, which is why the Tenderloin must join District 3.