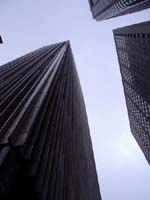 Amid the towering banks on Montgomery Street in San Francisco, a group of workers shouted and circled in front of Wells Fargo and American International Group, angered at how the financial institutions are handling taxpayer dollars. A group of about 75 chanted and waved signs Thursday afternoon, as part of nationwide rallies to protest how the economic recovery plan is unfolding.

“These banks are massive recipients of taxpayer money,” said Nick Fynn, spokesperson for Change that Works, part of the Service Employees International Union. “AIG and Wells Fargo are part of a full frontal assault, lobbying against important worker legislation.”

Fynn said banks like these two, as well as Bank of America and Citigroup, are collecting from the Treasury’s Troubled Assets Relief Program and using that money to oppose the Employee Free Choice Act, legislation introduced in the House of Representatives Feb. 10.
“It’s hypocritical, it’s wrong and these banks just don’t get it,” Roberts said.

The EFCA seeks to amend the National Labor Relations Act to make the process of organizing into a union easier and provides for mandatory injunctions for unfair labor practices during these efforts. Opponents argue the legislation would take away the right for a private vote and could lead to overt pressure and coercion to join or not join a union.

Matt Roberts, a security guard and member of SEIU, said he was at the rally in San Francisco to show the labor movement’s support for the EFCA and to protest corporate greed. “The fat cats are getting fatter while they’re taking away our hard fought gains. They’re using bailout money in ways it was not intended. It’s shameful.”

The signs and the chants of the crowds centered on making the economy work for everybody, including the working class. One woman shouted through the megaphone that Wells Fargo is foreclosing on people struggling to pay for their homes while taking money from the taxpayers.

Pat Davis, a temporary SEIU organizer and retired city of Oakland employee, said she was out there for the sake of everybody that’s hurting. “I was almost in foreclosure,” she said. “I was able to bail myself out, but other people weren’t able to do that. I’m here for them and I’m here for me.”

Davis and others at the protest said they want to show support for President Barack Obama and other representatives fighting for the rights of workers. “The president asked AIG executives to give back the money and do the right thing. We’re here to show our support for the bold moves of some courageous members of Congress and the president to make sure corporate greed stops.”

Roberts said Wells Fargo’s actions directly affect him, because the company uses non-union security guards and hires the lowest bidder, which he added usually means paying below substandard wages. “This is a union town,” he said. “Most have the sense to know they can’t do business without the union. They are taking money and benefits away from hard working men and women.”

Before leaving the two banks, the crowd chanted, “We’ll be back.” Roberts said the protests will continue until he and his fellow workers see improvement. “We’re sick of the fact they’re taking out taxpayers’ money and lining their pockets with it. Things better change, and damn quickly.”

Apart from employees having to use other doors, business seemed to proceed as usual at Wells Fargo on California and Montgomery, with the normal security guard standing just inside looking out at the crowd. On the building at California and Kearny Street, the organized shouted up to AIG on the 31st floor of the building, booing and yelling protests.

Fynn said he was pleased with the turnout, especially since there was a different rally protesting the Iraq War just a few blocks away on Market Street.