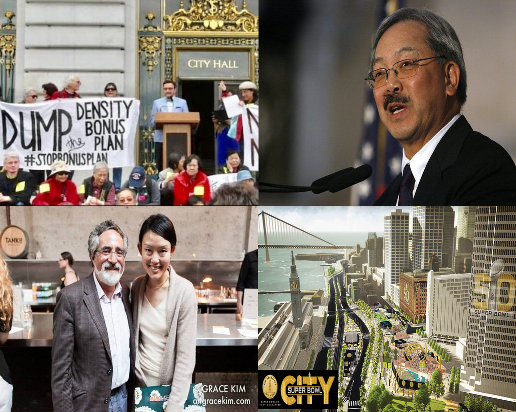 For many San Francisco Bay Area residents, 2016 was the worst of political years.

As promising as 2016 began, Donald Trump’s election turned the past year into a train wreck. The 36 deaths in the Oakland warehouse known as the Ghost Ship made the already depressing year even worse.

I understand that many cannot get beyond these twin tragedies. But I also think recalling what happened in San Francisco politics in 2016 is necessary to help guide our actions for the coming year.

For San Francisco progressives, 2016 got off to a tremendous start. Aaron Peskin was back on the Board after his strong grassroots base won the November 2015 D3 election. Jane Kim’s State Senate race against Scott Wiener was already off and running.

I nicknamed the Kim-Peskin team the “Splash Brothers of San Francisco politics” after our great Warriors duo of Steph Curry and Klay Thompson. I noted that whereas Peskin partnered with Chris Daly in his prior time on the Board, now he would create political opportunities for his new colleague, Jane Kim.

While progressives were energized, Mayor Lee was not. Lee lost an opportunity to energize his base through his re-election campaign because he faced no serious opposition; he did not have to mount the type of strong grassroots campaign that brought him victory in 2011.  Lee then entered the year with little momentum and soon became ensnarled amidst complaints about the Super Bowl.  The media seemed to love stories blaming Lee for the Super Bowl, though some of us argued that the critics of Super Bowl City were “wrong.”

Super Bowl City’s removal of homeless people from lower Market Street and their relocation to other areas increased public anger over encampments. Division Street became a virtual tent city and Mayor Lee was slow to respond. A March phone poll showed Lee paid a price for his inaction: As reported in Matier & Ross, “For the first time, a majority of respondents disapprove of the job Lee is doing. His approval number is down in the low 40s, and the percentage who say they “strongly approve” of his performance has dropped to single digits.”

This poll intensified a progressive narrative that by October labeled Mayor Lee as “toxic and despised across the board.” For the first time Lee’s opponents saw political vulnerability in a mayor who easily won election in 2011 and whose poll numbers discouraged serious opposition in 2015.

San Francisco politics in Spring 2016 were dominated by conflicts over the proper percentage of affordable housing private developers must provide. Everyone agreed that the then 12% figure was too low. The dispute was over whether a study should be conducted to determine the highest possible percentage developers could afford or whether a flat 25% should be instituted.

Kim and Peskin led the fight for 25% affordability in projects over 25 units and were eager to put the higher requirement on the June ballot. This forced Mayor Lee to abandon plans to reach a higher figure through a more time consuming consensus process.

The Mayor and developers reached a deal with Kim, Peskin and their allies for a June Charter Amendment (Prop C) that accepted the 25% for new projects but allowed thousands of units in the pipeline to get in at 12-15%. With nearly everyone on board, Prop C easily passed.

From today’s perspective, San Francisco’s inclusionary housing wars in 2016 were much ado about little. No project impacted by the 25% has broken ground, though backers of the higher percentage would argue that it helped supervisors negotiate deals with developers that obtained this higher level.

As much as developers fret over the 25% figure bringing development to a halt, there is still a ton of units under the lower figures yet to come on line. The debate over the viability of 25% inclusionary will not become real for a few more years.

Further, on a 100 unit project we are talking about a difference between 15 and 25 inclusionary units. That’s ten more affordable units on a good sized project. Given San Francisco’s need for thousands of more units affordable to the working and middle class, the importance of 15% v. 25% inclusionary was vastly overstated.

Peskin brought unity to a newly created group of six “progressive” supervisors, who were joined in some key votes by a seventh, London Breed. Peskin instantly became the supervisor most often quoted by media, further raising his profile and empowering his allies on the Board.

From progressive reaction to the AHBP you would have thought that Lee and Tang were calling for the abolition of rent control. This mild attempt to get more housing units built became a call to arms for nonprofit housing activists, tenant groups, and neighborhood groups in areas like Noe Valley where no affordable housing projects ever get built.

Longtime housing activists Calvin Welch was so riled up that he described the density bonus plan as “ethnic cleansing.” Perhaps if Welch had spent some time in Bosnia in the early 1990’s he would not have applied such a murderous term to a San Francisco housing program.

The planners backing the AHBP were steamrolled. After it no longer applied to market rate projects, Peskin  backed a version of the AHBP that only applied to nonprofit housing, which easily passed.

If there was a single campaign which showed the breadth of the anti-market rate housing coalition in San Francisco, it was the defeat of the AHBP.

By May, the city’s political focus had already turned to the November elections. The immediate agenda of the city’s “progressive” and “moderate” political factions was twofold: first, win control of the San Francisco Democratic Central Committee (the DCCC), securing endorsements for November races. Second, put initiatives on the November ballot that help your faction’s candidates win.

After a hard fought battle and heavy spending on both sides, progressives  won DCCC control. Progressive supervisors also got the six votes they needed to put multiple measures on the November ballot that they thought would help their candidates win. This resulted in a record long San Francisco ballot, crammed as it was by supervisor-imposed initiatives.

It was a classic case of being careful what you wish for. Having  the power  to put as many measures on the ballot that they wanted, progressive supervisors overreached. They ignored the strategic downside of backing initiatives that would lack grassroots support or the ability to even mount a fall campaign.

I questioned this strategy of San Francisco politicians’ “hijacking” the city’s initiative process. I asked in July:  “Is a poorly informed electorate a good thing for progressives or the city as a whole? I don’t think so.”

The ballot measure strategy certainly did not prove a good thing for progressives. It ultimately resulted in major victories for Mayor Lee. I discuss these campaigns in Part 2 of this Year in Review.

Randy Shaw is Editor of Beyond Chron. Get inspired this holiday season by reading his two most recent books, The Activist’s Handbook and The Tenderloin: Sex, Crime and Resistance in the Heart of San Francisco.