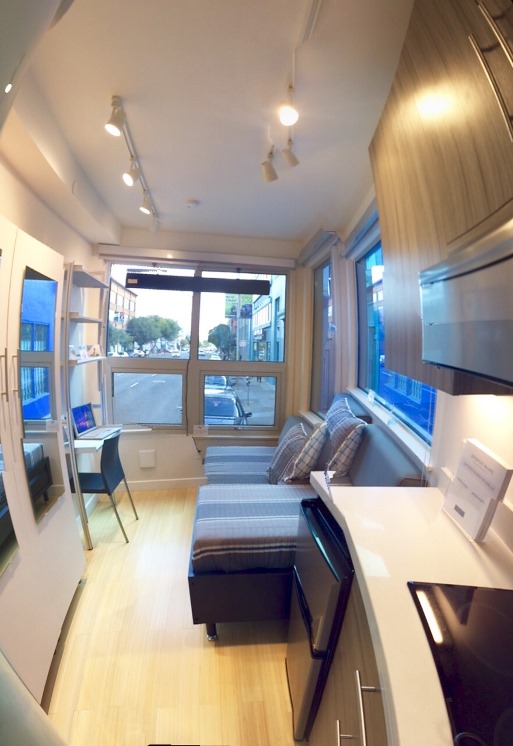 Patrick Kennedy's Micro-Pad, on display at 9th and Mission

If you want to see how San Francisco can best reduce homelessness, go to 9th and Mission and tour the SF Micro-PAD. The brainchild of developer Patrick Kennedy, the Micro-Pad’s 160 square foot units could soon bring 1000 housing units to the city, with a third for the very poor.

San Francisco should be rushing to embrace this.

Other stories on the Micro-PAD claim that “nearly everyone” opposes Kennedy’s concept. That is false.  SRO tenants would love to move to these units, and most people I have talked to who have visited the model are totally on board. A delegation of Tenderloin Housing Clinic SRO tenant leaders toured the Micro-PAD on November 2 and nearly all came away excited and impressed.

Nonprofit housing groups claim to oppose the plan because Kennedy “is out to make a buck;” yet these groups pay a lot of bucks to for-profit contractors to build nonprofit housing.  Given how few housing units for the homeless that nonprofits other than the Community Housing Partnership have created, they should be cheering Kennedy’s effort to fill this need.

But the supply of SROs feasible for leasing is running out. This means that people in shelters will be there longer before exiting to housing.  The supply shortage could easily extend these waits for months, keeping shelters full.  The full implications of this backlog will become particularly clear if Prop Q passes next week, since the measure provides that a lack of shelter space creates a legal right to camp on sidewalks.

That’s why San Francisco desperately needs to support the building of Micro-Pads.

Kennedy’s Micro-PAD plan enables housing to be built faster, cheaper, denser, and on sites too small for conventional projects. While the term “micro” is used, the 160 square foot units are much bigger than nearly all of the city’s existing SRO units.

SRO’s average 100 square feet, with many in Chinatown and Sixth Street  much smaller.Micro-PADS provide tenants with rooms nearly double the size of many SRO’s and over 50% larger than average. All micro-PAD units have private toilets and showers, which most SRO rooms lack. They also have convection ovens, which are typically illegal in SROs.

The Micro-PAD is more akin to a studio apartment than the traditional San Francisco SRO. And for supportive housing tenants unable to afford apartments, the Micro-PAD offers a step up to having a private bath and cooking facilities in one’s unit.

Micro-PAD units can often be built in double the density of a conventional project.  Isn’t that what a city with 6000 homeless people and nowhere near that number of available housing units to put them desperately needs?

Micro-PADs can also be built on small or irregular MUNI-owned sites where conventional housing cannot be built. Kennedy can not only add to the homeless housing supply by building on these sites, but can return the parking to MUNI after construction.

How can San Francisco turn down such a deal?

The SF Building Trades Council strongly opposes Micro-PAD’s, whose framework is built in China (if we’re talking consistency, the Trades leaders use phones made in China and their clothing is likely made overseas). Although 66% of the completed Micro-PAD built on city land would be union built at prevailing wages, the Trades see this as the first step toward turning the San Francisco construction industry non-union.

That’s nonsense. Micro-PADs are a niche product designed for that small segment of the market that can only afford a 160 square foot unit.

After the 1989 earthquake destroyed homes in the Marina District, the city passed emergency laws fast tracking permits and approvals. This proved an enormous economic benefit to Marina property owners, who were allowed to build improved replacement structures.

At no time did the SF Building Trades demand that this expedited rebuilding include a requirement for prevailing wage. This was true even though the city was conferring an enormous economic benefit on owners.

Yet the emergency faced by Marina owners is a daily experience for thousands of San Francisco’s homeless population. San Francisco has an acute homelessness crisis that federal and state governments refuse to solve. If the city is serious about reducing the numbers of people on the streets and in shelters, it must build Micro-PADs.

If Kennedy builds a Micro-PAD on private land, the Building Trades can’t stop him. But they can try to prevent city agencies like the SFMTA from leasing him sites. And that would cause a great human tragedy. The economics of paying top dollar for private land and then building Micro-PADs for the homeless would require city subsidies to work. San Francisco cannot significantly reduce homelessness unless it makes these small, irregular MUNI sites available.

The “pro-housing” Building Trades are fighting to maintain an untenable status quo where thousands in San Francisco live without housing. I think most San Franciscans disagree with their stance.

I recently wrote about a future Tenderloin “step-up” project which will open up 34 supportive housing units to currently homeless persons while the former residents (who now pay no more than $500) move to apartments at rents of $700-800. Kennedy’s plan differs in allowing tenants who move from supportive housing to keep their same low rent, which can be subsidized by charging market rents ($1400-1800 depending on neighborhood) for half or a third of the units.

That’s another reason why Micro-PADs are such a great deal for the city. By increasing density within existing zoning, it can use internal subsidies rather than scarce public dollars to provide top quality housing for the very poor.

If San Francisco wants to solve homelessness without new taxes (note the sagging poll numbers for Props J and K), it must back cost-neutral strategies like Micro-PADs. In a year that saw the city finally create a new Department of Homelessness and Supportive Housing, it’s again time to go outside the box for real solutions.

Randy Shaw is Editor of Beyond Chron.  He discusses the history of SRO housing in his book,  The Tenderloin: Sex, Crime and Resistance in the Heart of San Francisco